Stefan Kiesbye talks about his brilliantly chilling Your House is on Fire, Your Children All Gone, what staring means, and why terror in a village is different than terror in a city 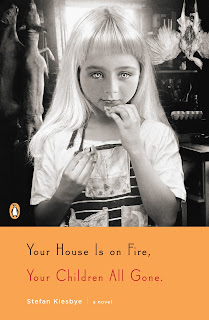 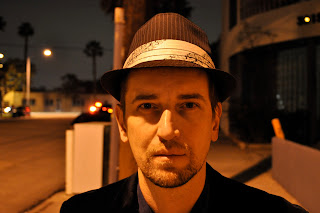 First, I dare you to look at that cover and not immediately feel spooked. Stefan Kiesbye's extraordinary Your House Is on Fire, Your Children All Gone came through my mail slot and instantly I felt unnerved. It's a genius cover and in this case you can tell a book by it's cover, because the book is THAT good. Four sinister children  have come of age on the Devil's Moor, quietly telling their stories in a way that will make you more than a little nervous. But don't just take my word for it. Look at some of this praise:

“A very elegant nightmare, so appalling and so beautiful.” —Audrey Niffenegger, author of The Time Traveler’s Wife and Her Fearful Symmetry tracked down Stefan and he very graciously agreed to come on the blog and talk about his book.

I'm so honored to have Stefan here.  Thank you, so much, Stefan.

You said in an interview (I'll link it) "someone has to stare." I don't think I've ever heard a better definition of what it is a writer does. Is there anything you personally would not stare at?

I was often scared as a kid, and sometimes I believe that watching people was a way of figuring out whether or not they could be threatening toward me. Then, of course, there’s plain curiosity – staring at things I don’t comprehend but am fascinated by. Yet I try not to stare at things or people I can’t learn anything from. I don’t stare to intimidate or to feast on somebody’s mishap.

Your novel is so chillingly scary. It crawls under your skin, actually. But I also think it transcends the horror genre in a lot of ways because it, on the surface, seems so ordinary in its details, and yet bubbling below is something terrifying. So let's talk about the writing process here. Was this deliberate? Did the story dictate the style? When you are writing, what's your writing process like? Was there ever a moment when you felt you were losing control of the story and you had doubts about telling it?

I wrote the first chapter of the book in a harsh Michigan winter, when we didn’t see the sun for several weeks. I remembered the winters I knew as a kid, which were mostly spent reading and eating candy, and I preferred dark tales that had the power to console some hidden corner of my heart. Your House Is on Fire, Your Children All Gone is my version of the legends and tales I soaked up as a kid, but the novel is also informed by a stark realism I discovered in American literature.  I’m glad you mention that the book is not “straight” horror, but derives some of its pleasures (I hope) from the depiction of everyday cruelty and mundane violence. I tried to find a language for the world I experienced as a kid, a world in which fairy tales and superstition were tightly interwoven with neighbors’ visits or going to school. In my family, ghosts, fortune telling, and superstition were facts of life.

Somehow, the fact that the novel is set in rural Germany makes it more chilling. Do you think the book would have had the same impact if it were set in a city? How does the whole story world impact and illuminate your themes?

It wouldn’t be impossible to set a story like this in a city, but city horrors are different from those found in a village. In a city, not much stays hidden, and horrors are often mixed with panic and public displays of fear. In the village I describe, violence can stay secret, and there’s almost something contemplative about the horrors. Village scares are slow-moving affairs, and there are no police or streetlights to dispel the fear. Also, the legends of the moor would never be able to penetrate the city. They need the open, barren spaces, and the real isolation of the villages. There’s nothing hectic about village horrors. They stay with you, eat with you, sleep with you. They have all the time in the world.

The cover of the book is so eerie and unsettling. It reminded me of those Children of the Damned films (I don't know if you've ever seen them--a group of blonde, odd-eyed children were born and they could destroy people just with the power of their mind). There's something off about the girl's proportions, and certainly about her eyes, and the casual way she's eating somehow makes her all the more terrifying. Were you responsible for this cover? Did you have input?

I didn’t have any input, but I loved it immediately. It’s just a fantastic cover, eerie without being obvious. I especially love the clear print that – if held at a certain angle – seems to whisper a threat into the reader’s ear.

My wife and I just moved to a small town in New Mexico, and I’m beginning to learn the landscape, the legends, the snakes and stray dogs, the pick-ups, the winds that cover everything with reddish dust. For the first time in years, there are stars in my sky. Lots to stare at.

I’d like to say that the landscape of the book – the Northern German Devil’s Moor – does exist. The village of Hemmersmoor is my invention, but it’s not so far from the truth. What the reader encounters toward the end of the book is very real again. My parents and I discovered it by accident on one of our drives, and it seemed too casual to be threatening, and only much later did I understand its significance. So I wanted to give it that casual horror, something a small child might not comprehend and find delightful.