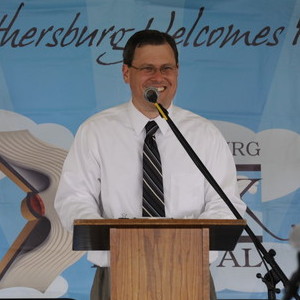 Jud Ashman is not only warm, funny and totally wonderful, he's also a powerhouse and a tireless promoter of readers and writers. He's not only a councilman, but he's also the recipient of the prestigious County Executive's Community Award for Excellence in the Arts & Humanities for his founding and promoting the Gaithersburg Book Festival. (Saturday, May 18th, from 10 to 6) I was honored to have attended this festival last year, which quickly became one of my favorites, and I'm even more thrilled to be judging their High School Short short story contest, as well as appearing again this year.

I can't thank you enough, Jud for letting me pester you with questions--and I can't wait to see you in May!

The Gaithersburg Fest is one of my favorite festivals because of the whole atmosphere--it was such a warm experience for me I didn't want to leave. How did you make that magic happen?

The secret is “pure love.”  The Gaithersburg Book Festival is an expression of pure community love.
And I didn’t make that magic happen, Caroline.  You did!  You and all of the other terrific authors out there, past and present, who touch our souls, teach us about the human experience, and enrich our lives from the salad days through the golden years.

My most important role in this, and the one I’m most proud of, was identifying a lot of great people who recognize that truth - and bringing them together.  Hand in hand, we built the Gaithersburg Book Festival because we believe that nurturing a love of reading is an endeavor of great cultural consequence.

And also because we love doing it!

What surprised you about creating a book fest? Did anyone give you strange warnings or was their encouragement all the way?

Biggest surprise: the sheer enormity of the planning

In January of 2009 I sat down at a Starbucks with our city’s Parks & Rec director to pitch her on the idea for this festival.  Next to my hot chocolate, I had a sheet of copy paper with all sorts of big ideas printed on it: best-selling authors speaking in huge, canopied pavilions, broadcast live on C-SPAN, covered in the Washington Post, funded by NEA grants, and all this other pie in the sky stuff.   (BTW, all but the grants has since come true.  Hello, NEA, are you out there?!)

She was clearly excited.  It was unlike anything else the city was doing at the time.

“When do see this event taking place?” she asked.

“I was thinking that May would be a good time,” I replied, “Do you think we can get this going in time for this May?”

Her smile faltered for a brief moment and then returned.  “I think we’ll need more time to get this going, Jud,” she said, “why don’t we shoot for May of 2010?”

Boy, did she turn out to be right!  16 months of planning later, on the eve of our first GBF, I remember still thinking, ‘are we really ready for this?’

As far as warnings or encouragement, most people fell into one of two categories: they either underestimated the scope of what I was proposing, or they looked at me askance for spending so much time on such an unusual pursuit.

Thankfully, though, I had the support and encouragement of a number of key people.  And the energy on our planning committee was self-sustaining.

What's the best part of the festival? The most challenging?

A Sophie’s Choice!  There are so many great aspects – fabulous authors, workshops, performances, exhibits.

I’m often captivated by exquisite little moments.  For example, I always enjoy watching a volunteer introduce an author whom they greatly admire.   It’s a beautiful thing, and I believe that fostering that sort of connection between reader and author is one of the things that set our event apart.

As Jim Lehrer began his talk at this year’s GBF, a train came by, its horn blaring.  The track is very close to our Festival grounds, so this happens periodically; some authors are annoyed by it, some find it charming, and others try their hardest to just ignore it.   It evoked something else in Lehrer, however.  As the train passed, he looked at the crowd said, “You know, I love that sound.   Growing up all those years ago in a small town in Kansas, I’d lie in bed and listen to the trains go by.  They were my connection to the larger world out there, to escape, and to adventure.  I’ve always loved that sound.”  It was poetic and heartfelt.

There was a funny moment in 2010, at our debut Festival.  The great Alice McDermott had finished her remarks and was taking questions from the audience.  The questions took her through the writing process and her all-time favorite authors (Nabokov, if I remember correctly), until an elderly lady stood up and said, “I really like what you read and what you have to say.  What did you say your name was again?”  Classic.

The most challenging part of the Festival has been getting people to see past the “Gaithersburg” in the title and recognize it as the regional-scale event that it is.   I like having “Gaithersburg” in the title because I want to help build our city’s brand as a cultural destination.  However, on first glance, people tend to imagine a much smaller-scale festival.  I’ve had it suggested to me, many times, that we rename it something like “Mid-Atlantic Regional Book Festival in Gaithersburg” or “Maryland State Book Festival in Gaithersburg.”  Perhaps someday…  J

You're also on the city council--how do you manage to do all that you do?

I have a very tolerant wife and family!  All of this stuff is fun for me, so the hours I spend are enjoyable rather than excruciating.

I’ll note that, as unusual as it is for an elected official to drive a cultural arts endeavor like this, my public position made it significantly more possible.  (Note: I didn’t say “easy!”)

First off, I had direct access to the Mayor and my Council colleagues.  The Mayor and Council control the purse-strings, and, indirectly, the expenditure of staff resources.  I’m only one vote out of five, so I need their support.   Fortunately, my colleagues have been more than supportive; they’ve participated in significant ways, and added to our event.  There are more cities than not where this wouldn’t have been the case.

My Council position also gave me access to City staff, who run the logistical side of the Festival like clockwork.  I had access to community stakeholders, whom I was able to approach for sponsorships.  And, most importantly, my Council position gave me the platform to recruit a spectacular group of volunteers, who work directly with staff, and who’ve adopted this Festival as their own.

How do we get Stephen King or Suzanne Collins to our Festival?!

This is the time of year where we start recruiting the “dream list” authors, which is always an ‘obsessive’ and exciting period for us.   To add a ridiculously inelegant paraphrase: recruiting authors is like a box of chocolates, you never know who you’re gonna get.

What are your future plans for the festival?

The Strategic Plan:  Take every opportunity to make the Gaithersburg Book Festival more and more awesome - in every conceivable way!

In the short run, I’m working with Politics and Prose, our bookseller, on launching a series of individual author events at other times of the year.

I imagine that you wanted to ask about my handsomeness, integrity, or general brilliance - but you were too shy.  You really should’ve asked about that, but it’s OK.  Here’s an alternative.

How can people find out about the Gaithersburg Book Festival?

Please make plans to join us, and the superb, illustrious Caroline Leavitt, at the Gaithersburg Book Festival on May 18, 2013.
Posted by Caroline at 9:14 AM