Charles Salzberg talks about Swann Dives In, using real names in fiction, and so much more 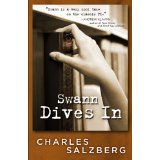 Charles Salzberg's last novel Swann's Last Song was nominated for a Shamus Award for Best First PI first novel. Devil in the Hole will be published spring, 2013. I'm honored to have Charles write an essay here about his new novel, Swann Dives In, which is hot off the presses--and wonderful. Thank you, Charles.

It started out as pure lack of imagination.  I was trying to think of a name for a character in Swann Dives In, a disbarred lawyer of well, let’s say questionable repute.  For some reason, my friend, Mark Goldblatt’s name popped into my mind.  I thought, sure, why not use his name as a place holder, until I came up with something better.

As often happens, the Goldblatt character took on a life of his own.  He grew literally and figuratively. Mark is of average weight and normal appetite; Goldblatt is an overweight glutton. Mark is always on the straight and narrow.  Goldblatt plays every angle there is, and not always well.  The character was terrific fun to write.  And, after a while the name, well, it not only seemed right, it seemed inevitable.  He was a keeper.  So much so, that when I was asked to contribute a story to Long Island Noir, I chose to make Swann the protagonist, but added Goldblatt as the other main character.

Since it was a nice, little inside joke to use Mark’s name, I thought, hell, it might be fun to use other names of people I knew.

And so when I wanted to create a character that was an expert on rare books, because that’s the world Swann finds himself thrust into as part of his search for the daughter of a wealthy attorney, I used my friend and fellow writer, Ross Klavan, even giving the character some of Ross’s physical qualities.  Swann’s search takes him up to Syracuse University, where he meets an unconventional English professor.  This became Richard Dubin, a professor friend of mine, who teaches film and television at the Newhouse School, where I once taught.  As with Klavan, it seemed quite natural to give this character some of Dubin’s physical traits.

I didn’t bother asking permission of any of these friends, knowing I could always change the names once the book was finished.  But when I mentioned it to them, none of them seemed disturbed.  In fact, they were pleased.  What I didn’t expect, though, was that each of them wanted to be a villain.  Another surprise was that not one of them asked to read the manuscript.  They didn’t care how they were portrayed, just that I spelled their names right.

I’d be lying if I didn’t think about the potential promotional possibilities of using real names.  They’d tell their friends about the book.  They’d Facebook and Twitter about it. Something like, “Hey, guess what, friends, I’m a character in a new detective novel.”  And, of course, all their friends would rush out to their local bookstore and purchase the book.  One unexpected benefit is that Richard Dubin has invited me up to Syracuse University to interview me, one on one, in front of the Newhouse students and faculty.  My only question is, which Dubin will show up?  The real one or the one I created?

Thank you for any other excellent post. The place else
may anyone get that type of info in such a
perfect method of writing? I have a presentation subsequent week, and I'm on the look for such information.