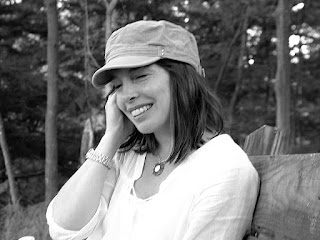 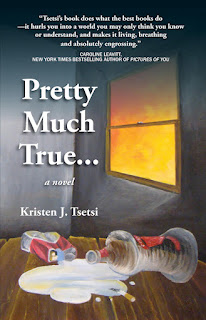 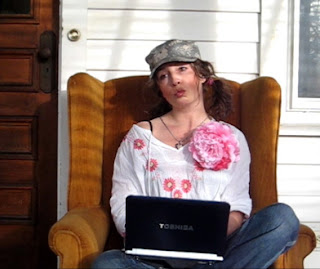 I love the Paper Rats and the videos they do (especially since they allow me to be goofy in them.) When Kristin told me she had a new novel coming out and would I read it, I, of course, said yes. The book is extraordinary. It gets at the heart of what it's like to be one of the ones waiting while your loved one is in Iraq. Raw, real and blazingly honest. I asked the other Paper Rat, the novelist R. J. Keller if she'd like to interview Kristin--so I'm thrilled to have them both here on the blog! Thanks, guys!

Pretty Much True... is unflinchingly realistic, almost painfully so at times. Did you ever find yourself wanting to sugar-coat anything as you wrote?

A few (very few) things Mia does, specific actions, are pulled directly from my experience. I sometimes wondered whether I’d be revealing too much of myself or my handling of (my husband) Ian’s being in Iraq (he had already been home for a year before I started writing Pretty Much True…), but then I remembered, “This is fiction. No one’s going to know which few bits are real.”

As for the greater realism of the story, I was never tempted to sugar-coat anything. When I started taking writing seriously at about 19, I was morbidly fascinated with drawing out the truth, and the more embarrassing, or the less likely we’d be to talk about it out loud, the better. It’s part nosiness and part lust for make-your-gut-churn, hard-core honesty, but more than anything else, it’s a desire to force an admission that the things we hate about ourselves or others are completely natural. It’s also an effort to make those unlikable, ugly things a bit more lovable. Even funny. The characters in PMT all have surface traits or behave in ways I’m almost positive would turn people off in real life, but that – once exposed to their sources – make perfect sense and make the reader think, ‘Ohhh...that’s why.’ Just as it would happen in life.

Why did you write this particular story? Was it a cathartic exercise?

I’ve been writing fiction for about two decades, and I’ve always leaned toward stories about whatever is foremost in my life or psyche at the time. Like many people who write, I’m almost unconsciously turning about twenty events or observations per week week into a potential story or scene and would probably wear a t-shirt that reads, “The unwritten-about experience is not worth having.” As trite as it sounds, it’s how I truly feel, and the experience doesn’t necessarily have to be my own. This was an experience that wanted to be a book not just because it was filled with all of the necessary and compelling elements, but because it would provide a window into something most won’t ever experience—or otherwise have this kind of access to. Seven different personalities, with their own lives and everyday conflicts (whether stemming from issues with a romantic relationship, memories that won’t go away, or attachment to a child), still have those conflicts, but their personal atmosphere resembles that of a tornado. The world changes color, and there is a constant awareness that something is coming.

One of the things you focus on in PMT is the sometimes glib way in which the news media reported on casualties when the war began, almost like it was a numbers game. Do you think media coverage of the war has improved any or gotten worse?

It’s virtually non-existent. When soldiers are killed in Afghanistan these days, they receive a second- or third-story mention. The war is “old news.” When announcing casualties, the anchors may as well be saying, “Gas prices rising in New England, and the sun once again beating down on the desert dunes.” (The relatively recent trend of news anchors to speak in gerunds, as if it adds to the immediacy of the story, is also something I find troubling. This comes out a little bit in Pretty Much True….)

You, like your protagonist, Mia, spent some time working as a taxi driver. Share a funny experience from that.

Oh, there are so many…! Here are just a few: 1. The two older men in dirty overalls, with white beards and mustaches stained yellow around their mouths from nicotine, who asked when I picked them up if they could put their dog carrier – dog included – in the trunk. (“No,” I said.) 2. The two women who asked from the back seat whether they could smoke crack in the car. When I said no, it was illegal, they said, “What about pot? Can we smoke that?” (“Uh, no. That’s illegal too,” I said. One of them muttered, “Cops smoke it.”). 3. This one isn’t funny, but memorable. One man directed me to what I believe was a drug deal in a house on a narrow, pavement and gravel road. Before getting out of the car, he asked me to wait for him. He went inside the house, and I listened to some NPR. After a minute or two, he was in the yard waving me away. “Go on. Get out of here,” he said, and the way he was looking at me told me it was probably the safest thing to do. It was very exciting.

The first time I read this book, I REALLY disliked Denise. I've read it four times since, and now she's my favorite character. Denise craves an identity and life of her own, apart from that of Military Wife, while Mia finds it difficult to do that, or even to go on with her life while he's away. Was your experience more like Denise's or Mia's?

It was a combination of the two. It was never my interest or intent when marrying someone in the Army to identify myself as a “military wife.” I haven’t really become a part of the spouse community. Not because it’s military, but because there’s never been an interest in classifying myself as a “spouse” or as Occupation’s Wife. (Also, my husband is an Army aviator who also flew professionally outside of the military, so which would I choose – pilot’s wife or Army wife? It gets very confusing.)

At the same time, when Ian was gone, I was very much aware, constantly, of what time it was in Iraq, what he might be doing, when he might be waking up, when he might be going to bed. It made me feel connected to him to imagine him doing things. My identity became very wrapped up in his existence, at the time, and as much as it was something I needed, there were days it really pissed me off and made me resent him, even if it wasn’t his fault. I wondered, Where have I gone?

You lived in Germany for quite a while. Which beer is best?

I feel like I should have a really good answer for this, having spent 13 of my formative years in the beer capital of the world and having a father and a sister who both truly love the flavor. As a high schooler in Germany, I was old enough to go to the bar at sixteen, so I had plenty of it over the years because it was cheap (less expensive than a glass of Coke, if I’m remembering correctly), but I just never acquired a taste for it. One day, though, in a restaurant called the Bier Museum in downtown Heidelberg, I tasted what was said, at the time, to be the world’s strongest beer: EKU. It was so bad. Syrupy and bitter. But very strong, as advertised. Very, very strong.

Caroline Leavitt says you have a quirky sense of style.

I wish! I think this refers to a Facebook profile picture taken of me when I was playing the role of Sex and the City’s Carrie Bradshaw for an Inside the Writers’ Studio video. I bought a shirt at Goodwill with bright pink flowers on it specifically for that character, thinking at the time that it was hideous. After that, it was a trip to the craft store for a huge flower to pin to the shirt. (I’ve since grown very attached to the shirt and wear it all the time.) That’s the quirkiest my style has been – it’s nothing compared to the wonderful Leavitt cowboy boot fetish. Usually, I’m pretty conservative with a small twist of hippie.
Posted by Caroline at 5:17 AM

Whoa! This blog looks exactly like my old one!

It's on a entirely different topic but it has pretty much the same layout and design. Excellent choice of colors!

my web site - of payday loans