Maryanne O'Hara talks about Cascade, her prickly (and wonderful) heroine), obsessions, and so much, much more

I reviewed Maryanne O'Hara's eerie and unsettling Cascade for the Boston Globe, and it quickly became one of my favorite novels. Both a People and Library Journal Pick, it's been justifiably collecting high praise. For weeks after reading the novel, the image of a drowned city kept swimming in my mind, and I was anxious to have Maryanne on my blog. I'm thrilled and honored that she agreed. Thank you, Maryanne. 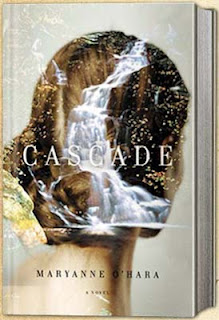 Great interview with an interesting ~ and helpful ~ perspective on writing. Thanks and this is now on my 'must read' list.

I just finished Cascade this afternoon, and I am definitely haunted by the images of the drowned town. What impresses me so much about those images is that you portray them through Dez, through her artwork. That's a complex series of levels -- to make the town real in and of itself, but also through these paintings that we can't, in fact, see -- that we imagine through Dez's eyes. That seem so vivid. So real. It's a brilliant use of perspective.

I love learning more about your process, especially since the process of making art seems so central to Cascade. There were places where you were writing about painting, where Dez loses herself in inspiration, and they could have been written about writing as well.

It's just so good, this novel, this story. I'm sure it will stay with me for a long, long time.