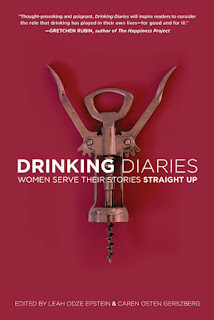 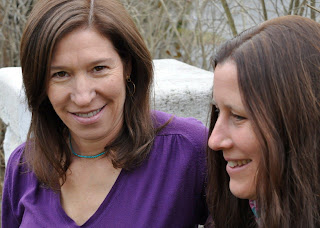 So, what's the deal with women and alcohol? Why is it cool for Mad Men to have their cocktail but sad when women hit the bar? Editors Caren Osten Gerszberg and Leah Odze Epstein put together a fabulous collection of essays all about the topic of drink. I'm thrilled to have them here. Thanks Caren and Leah!

What gave you the idea to do an anthology like this? And can you talk about your fabulous Drinking Diaries Blog, how that came about, as well?

We both have mothers who struggled with alcoholism and we both love to drink. These contradictions proved ripe for exploration and discussion, and we found that there was no forum—other than a church basement—for women to share their stories, good and bad. So we started the blog, soliciting stories from all kinds of women of varied ages, perspectives, experiences and backgrounds. We ended up with a treasure trove and wanted to create something lasting, so we decided to put together an anthology of original essays about alcohol’s impact on our lives.

Do you think there's been a reluctance in the past for women to talk about their relationship with alcohol? How do you think that relationship differs from the ones men have with drink? Or does it? And if it does, why does it?

We’ve noticed that the relationship has been dichotomized—either you are hiding your problem and feeling shame or you’re sipping cosmopolitans or doing shots with girlfriends and joking about it online. But what about all the people in the middle—the rest of the 64 percent of women who drink (according to the latest Gallup poll)?

At our reading at the Strand Bookstore, author Daphne Merkin brought up the idea of the guy at the bar alone, having a beer and how acceptable that looks. The whole male bravado, “Mad Men” thing. Whereas the image of the woman at the bar alone reads as sad.

Did any of the essays surprise you?

Jacquelyn Mitchard’s essay, “Thank you for Pot Smoking,” is about her preference of pot over alcohol for her kids—that was surprising and a great rant. Jane Friedman made a great intellectually-reasoned case for getting sloshed on a regular basis in “Drinking as Genuine Vocation.” And Asra Nomani pulled out all the stops in “Mother of All Sins,” by admitting she’s a Muslim who drinks.

What I loved so much was the bravery and no-holds-barred honesty of the essays. Was there any coaxing involved?

Not really. The honesty was there—the writers wouldn’t have signed on if they weren’t willing to share. But there were a few writers who we asked to dig a little deeper. And those that did thanked us afterwards.

What are you both working on next? What's obsessing you now and why? And I have to ask, I see you both live in Westchester County with a husband and three children--is this a typo or are you living wonderfully parallel lives?

Leah is going to return to writing young adult fiction, most likely about daughters of alcoholics, and she is also trying to convince Caren to do a teen Drinking Diaries. At the moment, she is obsessed with pink wine, because it’s like a happy mood in a bottle.

Caren is working on a few freelance articles and writes regularly on her travel blog. She is undoubtedly obsessed with her two dogs, and her recently begun meditation practice.

Yes, we live one block apart and each have three kids. We joke that we are now married.

Where can you get the book? Oh—good question. Anywhere books are sold and at IndieBound and Amazon.
--
Posted by Caroline at 9:59 AM

Asking questions are truly good thing if you are not understanding anything
completely, except this paragraph provides good understanding
yet.