Joan Frank talks about Because You Have To: A Writing Life


I love books on writing. I have a garden of them by my desk, but Joan Frank's is something special. Deeply personal and enormously practical, it gets at the beating heart of what it really means to be a writer. Joan's not only the author of five books  of fiction, she was also a finalist for the California Book Award, a MacDowell Colony Fellow, a Pushcart Prize nominee, and winner of the Dana Award, Michigan Literary Award, Iowa Writing Award, and Emrys Fiction Award. I'm thrilled Joan agreed to write something for the blog. 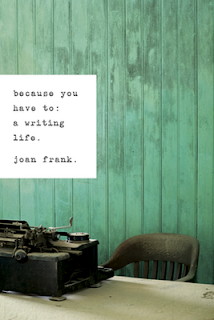 I have a new book of essays out of which I'm crazy-proud, called BECAUSE YOU HAVE TO: A WRITING LIFE (University of Notre Dame Press).
Full disclosure: It took almost ten years to get this collection published. I'd begun the search under the fond eye of its ad hoc editor, my then-best friend, who died in 2003.
Shaken, not yet defeated, I went on: searching like Diogenes for a publisher.
Further disclosure: I do not have a literary agent, for the simple reason that none has yet been able or willing to sell my work. All my books have appeared through the brilliant, gracious generosity of small, literary presses.
Without an agent, I knew that major publishers were ruled out as targets. So I sent BECAUSE YOU HAVE TO to every small press I could locate.
I learned then that writing that's about writing can be harder to sell—rather, place—than other kinds. Perhaps it seems too solipsistic to editors, too narrow or incestuous. "Hey, Joan. As a general rule we don't do writers writing about writing on the [New York Times] Lives page," its editor once dryly advised me.

And yet the squirmy fact is, more and more space—virtual, aural, paper—is filled by writing that's about writing. The nation's larded with creative writing programs whose teachers talk and write and assign books about writing all the time. On Facebook and other social media, we're avalanched by writerly news and reflection.
Why?
Because it gives relief.
Writing's a stunningly lonely gig that—paradoxically—aims for connection. "Hitting people's hearts," is how Tim O'Brien put it. But connection occurs privately, silently, often at great distance in time and space from the work's originator.
So we write, in the present, about how it feels to write. About what the act teaches us. About anguish, stuckness, the jackpot, the abyss. Surprises, insults, windfalls. Conversely, we read such writing for guidance, inspiration, and to compare.
We also sense a creepy inversion: that the actual writing product—stories, novels, memoirs—may stand in danger of becoming eclipsed by its by-product: the guidance, meditation, craft and gossip books.
One hopes not. But the impulse to write about writing (and the appetite for reading it) feels inextinguishable. It consoles us like little else to think with pen or keyboard about what has happened to us; to sift that experience for patterns and meaning. If rejection has ground us to paste, if envy has snaked poison through our veins, if we're so broke we're living on yogurt—or if we're floating in a fugue state, or on fire with the joy and grace of getting it right—what's more logical and satisfying than to shape these passionate discoveries into a series of written pieces?
That's how it worked for me, anyway. And as a whole, BECAUSE YOU HAVE TO feels like a completion, a finishing gesture: a kind of coda to a long period of lived trials and triumphs.
But in no way, friends, does it finish a writing life.
That won't end until I do!
Posted by Caroline at 1:56 PM

Really like the gritty determination to pursue the goal and find success. Good job!

Amazing! This blog looks exactly like my old one!
It's on a completely different subject but it has pretty much the same layout and design. Great choice of colors!

Check out my web site; a cash advance is