Linda Lafferty talks about The Bloodletter's Daughter, history and more 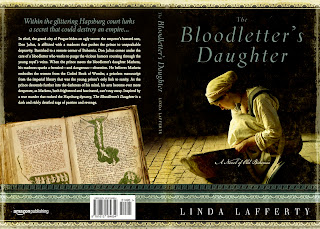 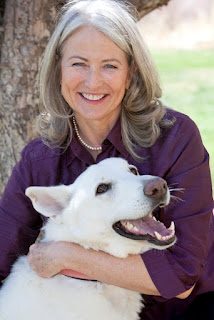 Speaking of history...I feel like I've always known Linda Lafferty. She sent me her novel The Drowning Guard, and I admitted that I didn't really read historical fiction, but within the first ten pages, I was swept up in the world she created--and I felt the same about The Bloodletter's Daughter. I'm honored to have her here on my blog. Thank you for the essay, Linda! And Happy Pub Day!

Seduced by History, in a Far-Off Land

When my husband told me for the nth time to stop assuming everyone knew who Rudolf II, Holy Roman Emperor, was, I became supremely annoyed.

“Americans are better educated than you give them credit for!” I snapped. “Of course they’ve heard of Rudolf II!”

I had submitted the final proofs of my historical novel, THE BLOODLETTER’S DAUGHTER and we were hiking near our home in the Colorado mountains. By chance, we met a high school world history teacher, a colleague of mine. I told him I was publishing a novel about the mad bastard son of Rudolf II.

I was aghast. My husband became disgustingly smug. And I realized that I had been thoroughly enchanted by an obscure (at least by American standards) period of history.

How is it that I fell in love with little-known characters in seventeenth-century Prague and Bohemia?

When I first heard the story of Don Julius, the mad bastard son of Rudolf II, we were on a hiking tour in the southern Czech Republic. When we reached the fairy-tale-perfect town of Cesky Krumlov, I could not believe the Gothic splendor of the castle built by the Rozmberks, a family as wealthy as Rudolf himself. It looms over the town, simultaneously enchanting and Grimm’s Fairy Tale creepy.

Then I heard the tale of how Rudolf  imprisoned his son, Don Julius, in the castle and how  the prince leered out the windows, his eye riveted on a Bohemian maid, living in the bathhouse below: Marketa Pichler, daughter of the local bloodletter.

Obsessed, the mad Don Julius had her brought to him. And, to avoid any spoilers, that is where the real action starts—and how! An electrical shock ran through me. That’s a novel—my novel!

Imagination ensnared, I became a slave to every fact I could find:  alchemy, botany, bathhouses, witchcraft, religion, and science.  Bloodletting. Galen’s four humors of the body. Paracelsus’s Bible of botanic cures.

And the mysterious Voynich Manuscript , now housed at Beinecke Library at Yale. This treasure was one of Rudolf ’s prized possessions. Scholars throughout the ages have tried to decipher it, to no avail.

Could I see it, hold it?  Study its pages?

The alchemy between historical fact and creativity was at work.

How could I not be charmed? Rudolf ’s court was filled with scientists, alchemists, astrologers, botanists, and physicians. Tyco Brahe and Johannes Kepler’s discoveries defined the science of astronomy.  Jan Jesenius performed the first public autopsy. Witchcraft was rampant, superstition laced everyday life.

I was pulled into the vortex of Old Bohemia, washing away the moorings of modern day reality.

Transported into another time and place—this is what I love as a reader of historical fiction. And I believe fervently that to write a historical novel, the author must first be transported, so absorbed that she loses herself in that other world.

And the only way to find my way back was to finish the novel. To be released from one faraway world to pursue another. Hmmm, Slovakia this time, seventeenth century?

Thank you so much for this, Caroline. You are right about history...I feel I have known you forever, too.

For future reference, the beautiful, classy cover was what made me click on it to see more. That and the glorious, gothic title. Beautifully done, just the right note; I love the Tudors but sadly they've been done to death now - completely soap-operafied - and here was the opportunity to be lured into a wholly unexplored historical world, what joy! I am only a few pages in but completely hooked. It reminds me a little of Rose Tremain's "Music & Silence"

Nadine, thanks for your comment. Since you complimented the cover design of the book, you might be enjoy the story of who is behind the incredible art...a photographer!

I am currently reading - and am completely besotted with - this book. The verbal imagery is incredible.

Heya i'm for the first time here. I came across this board and I find It truly useful & it helped me out a lot. I hope to give something back and aid others like you aided me.

Hi! I know this is somewhat off topic but I was wondering
which blog platform are you using for this website?
I'm getting tired of Wordpress because I've had problems with hackers and I'm looking at alternatives for another platform. I would be fantastic if you could point me in the direction of a good platform.
Here is my web-site ; Kredit Seriös

Woah! I'm really enjoying the template/theme of this website. It's
simple, yet effective. A lot of times it's challenging to get that "perfect balance" between user friendliness and visual appeal. I must say that you've done a
amazing job with this. Additionally, the blog loads extremely quick for me on
Chrome. Outstanding Blog!
My website :: krankenversicherung 2011

Please let me know if you're looking for a author for your site. You have some really good articles and I feel I would be a good asset. If you ever want to take some of the load off, I'd
love to write some articles for your blog in exchange for a link back to mine.
Please shoot me an email if interested. Cheers!
Visit my web blog :: bad credit housing Loans

You really make it appear really easy along with your presentation however I to find this
topic to be really something that I believe I would by no means understand.
It sort of feels too complex and extremely broad for me.

I am looking ahead on your subsequent submit, I'll attempt to get the cling of it!

Here is my web-site; pkv lotse
Also visit my weblog ...

How weird and coincidental is this- I have just begun to read 'The Bloodletters daughter' and found that it is set in Prague at the time of Rudolph 11 and features a magical book. I have just finished ''Shadow of Night' by Deborah Harkness and it features the same place, king and a magic book!! Recently I finished 'daughter of Smoke and Bone' by Laini taylor and it is set in Prague and involves magic. SPOOKY!!

hello!,I like your writing very much! proportion we
keep up a correspondence extra about your post on AOL? I need
an expert on this area to resolve my problem. Maybe that's you! Taking a look forward to peer you.
My website ; marken online outlet

Hi there! I could have sworn I've been to this site before but after checking through some of the post I realized it's
new to me. Anyhow, I'm definitely glad I found it and I'll be
bookmarking and checking back often!
Also visit my website Database error - ICNApedia WIki

Every weekend i used to visit this website, for the
reason that i want enjoyment, since this this web site conations in fact fastidious funny material too.
My blog post :: south padre island vacation rentals

Thank you, I've recently been looking for info approximately this topic for a long time and yours is the greatest I've found out till now.
However, what in regards to the conclusion? Are you certain in regards to
the supply?
Also visit my web page : private krankenversicherung familie

May I just say what a relief to uncover somebody that
truly knows what they're discussing over the internet. You actually know how to bring an issue to light and make it important. More and more people ought to read this and understand this side of your story. It's surprising you're not more popular since you most certainly possess the gift.
Feel free to visit my site : leistungen krankenversicherung

It is really a great and helpful piece of info.
I am glad that you shared this helpful information with us.
Please keep us informed like this. Thank you for sharing.
Here is my webpage - hop clickbank net

I'm not sure where you are getting your info, but great topic. I needs to spend some time learning more or understanding more. Thanks for excellent information I was looking for this information for my mission.
My website ... loan consolidation rates 2012

Remarkable! Its in fact amazing paragraph, I have got much
clear idea regarding from this post.
Also visit my weblog : search engine marketing firms

Hi my loved one! I want to say that this post is amazing,
nice written and come with almost all vital infos. I'd like to look extra posts like this .
My blog post : stay at home make money

Howdy! This is kind of off topic but I need some advice from an
established blog. Is it very hard to set up your own blog?
I'm not very techincal but I can figure things out pretty quick. I'm thinking about setting up my own
but I'm not sure where to start. Do you have any points or suggestions? Appreciate it

Here is my web page read what they said about it