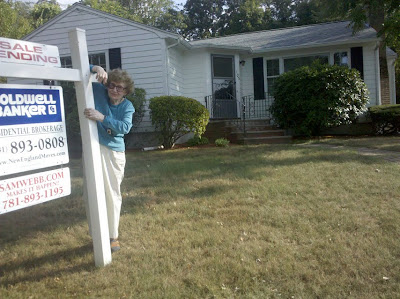 The woman in the photo is my mother, who taught me to read when I was three and who made sure I got to the library every three days, and who let me stay up late reading. This was the house I grew up in and my mother is now moving from it (in Boston) to a Baltimore retirement community, which is bustling, full of activity, and near my sister. We want her to be happy, and we hope this is the right move for her, and it's happening this weekend.
I became a writer in this house. My sister and I would walk to the Star Market (about a twenty minute walk) and buy notebooks and write novels in grade school. They were always about orphaned girls and their caretaker, who somehow was a millionaire, and they were set in schools, at the beach, or at camp, and we illustrated them. I wish I had saved these early novels, but when I got to be a teenage, they mortified me and I threw them out. All that remains are two pages from a notebook, that start out, "Hurry up!" said Martha, as she climbed into the car. "We're going to the Cape!"
As I got older, I kept writing. I made up books for book reports in junior high (and got As on the reports!), I refused to write an essay for the Kingsbury Temperance Essay Scholarship because I didn't believe in temperance, so I wrote a story that involved a squirrel (I'm serious) and a drunk. And I won $500! But by the time I was a teen, I was convinced the house was haunted, and all I wanted to do was leave.
My first novel, Meeting Rozzy Halfway, was set in this house. My 10th novel, The Missing One, which I am writing now, is set on this block. Maybe Thomas Wolfe was right, you can't go home again. But then again, maybe you never really leave.
Posted by Caroline at 3:51 PM

This brought back so many thoughts/feelings about my old house in Brockton. One of my first stories, written in a closet-sized bedroom with pink flowered wallpaper when I was about ten also featured a drunk (thought not a squirrel.) My drunk was such a vivid character to me that I can still envision her flouncing on the couch in her hot pink peignoir and her matching high-heeled slippers. One night when my parents had their friends over for "highballs" I listened from the same bedroom as my father read the story out loud and everyone laughed. It sounds traumatic, and maybe it was. But
hearing the dramatic lilt of my father's voice as he brought my story to life--albeit not the life I intended-- was the first time that my writing felt real.