Joan Leegant talks about Wherever You Go 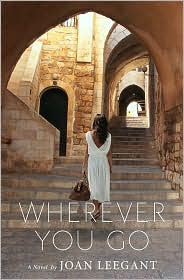 Joan Leegant, author of An Hour in Paradise, won the Edward Lewis Wallant Award for the best book of Jewish-American fiction and the L. L. Winship/PEN New England Award. Her brilliant, evocative novel, Wherever You Go asks how far someone is willing to go for something he or she believes in. I'm honored Joan allowed me to pepper her with questions. Thank you so much, Joan.

How far do you personally think we should go in the name of a cause? And do you think violence is ever justified?

People who commit themselves to causes, and risk their personal security or safety in the process, interest me, in part, I think, because I am by nature a moderate person, perhaps even cautious. I'm not given to hot-headedness or certitude; passion fascinates me and frightens me. I tend to see all sides in a situation and am often the one who tries to defuse conflict. Also, before I began writing fiction, I worked as a lawyer, and while plenty of lawyers are fierce advocates for causes, I tended to prefer negotiation and settling things among all the parties.

That said, I also believe in acting to uphold certain fundamental principles. It seems funny or maybe pretentious to write it on a blog about a novel, but the Bill of Rights, for example, matters a lot to me. Freedom of religion, the right to assembly, to free speech, a free press, separation of church and state. These feel very immediate; I don't take them for granted. In the late 1970s, when I was a young lawyer, I wrote what I thought was a polite letter to the town selectmen (like the mayor) of the Massachusetts town where I was living to ask them to reconsider their placement of a nativity scene on the courthouse lawn. I suggested it might be a violation of the separation of church and state. Unbeknownst to me, the selectmen read the letter aloud at a meeting, and a local reporter worked up a front page article about it for the county paper. The two-person law office where I was working got nasty phone calls. I received threats at my apartment and moved out for a few weeks. Some clerks at the local courthouse snubbed me. I had no idea. I was naive. I wasn't looking to stir up trouble. I just thought there was a violation of an important principle here and that someone ought to say something. So sometimes you have to speak up, even though it might impact your job or personal comfort.

But I'm suspicious of violence in the name of a cause. Too often when violence is involved, the so-called devotion to the cause is laden with emotional baggage. I saw this as a college student in the late 1960s. The Days of Rage, the Weathermen, SDS, protests on university campuses: there were a lot of very angry post-adolescents in those movements. Many needed to lash out against authority, and the politics gave them the framework and opportunity, the cover. Even if their positions were sometimes justifiable - protesting the Vietnam War, for instance - their tactics often were not.

How did this book come about? What sparked it? And what was the writing process like?

In 2001, I signed a 2-book contract with W.W. Norton: they published my short story collection ("An Hour in Paradise," Norton, 2003) and asked for an as-yet unwritten novel. At the time, I was just beginning work on a book about a recluse in New York City. It was slow going. I was renting a writing room attached to a large Victorian ten minutes from my house that had been a former dental office, and each day I went there was like pulling teeth. Finally, about ten months into it, I was visiting my son who was on a semester-long high school program in Jerusalem when the recluse story seemed to lift off my chest and sail away. In its place, the story of a group of young American women in Jerusalem rushed in. I wrote feverishly all night in the guest house where I was staying, about 70 handwritten pages. That was the beginning, the seed. The original Jerusalem story fell away and another one took its place, but that's where and how it got started.

I'm not one of those writers who works the material out in my head, or plots anything in advance, or writes outlines. I don't work from themes, saying I want to explore this or that idea. Rather, I conceived of these characters and wrote their stories to find out who they were and what was bothering them and what they might do. From that, the plot emerged.

All I knew when I started the book was that I wanted to write a novel about Israel, and about Americans in Israel, because this interests me a great deal. I lived in Israel for 3 years in the late 1970s, early 1980s, and again, since 2007, for five months a year while I teach at Bar-Ilan University in Tel Aviv. In the intervening 25 years, I have been deeply preoccupied with the country - taking trips, sometimes for month-long stays; reading; visiting friends; arguing and debating; worrying, you name it.

The book took 6 or 7 years to write. I can't remember how many drafts because I revised continually. I'm a night person and do most of my writing between 10 pm and 5 am. Very inconvenient for having a normal life. But what can you do. There were numerous personal challenges along the way. I lost vision in one eye at one point due to a medical problem, and I put the work aside for 8 months. During final revisions, my 23-year-old son was diagnosed with cancer, and my husband and I went to Los Angeles to be with him through treatment. All this helps to keep the externals of the writing life (publishing, worrying about reviews, etc.) in perspective.

The father of Aaron, one of the characters, writes cheesy best-selling novels about the Holocaust. Why do you think it’s easier for people to hear and believe things that aren’t true, than to look at the more difficult, deeper truths? And what do you think we can do about it?

The truth can be a lot harder to take than romanticized or incomplete renderings of history or life. It's much more complicated and complex and gray. It puts us on shakier ground, doesn't lend itself to easy answers or validate what we already believe or want to believe.

Yet, of necessity, we all construct varying narratives to help us navigate and understand our world: narratives about history, politics, religion, war, plus narratives about our own families and our own existences. Our task, I think, is to be willing to continually update and revise those narratives, to hold them up to scrutiny and see how they bear up as time goes on. It's the old axiom about the unexamined life. But this is hard to do. It's disorienting and tiring and disturbing to constantly be checking in with your old assumptions. And it can be threatening to what you've become attached to.

Fiction writers have an opportunity to make it possible for people to absorb some of the more difficult truths about life, be they personal or political or historical, through the vehicle of story. We can make the experience of looking at the more troubling human truths rewarding, and even uplifting, by creating work that's as good as we can make it -- work that is artful, that reaches for both heart and mind, that respects the reader, and that elevates the reader. This is a great gift to writers. I feel very fortunate to be able to do this with my life.

You’re the author of an award-winning collection of short stories, An Hour in Paradise. Was writing a novel more difficult a process for you or did you feel as if you had found your creative home?

Writing a novel, when I was doing it, felt more difficult than writing short stories, but now writing stories again feels more difficult than writing a novel. It seems to me, now anyway, to be a question of scope: stories are like a hot, burning fire. Everything is very intense and lit and urgent, and it's going to burn itself up if I don't get it right. The premise, the situation, the characters all have to share that urgency. Working on a novel, on the other hand, allows for a less overtly breathless set of elements, though the pay-off had better be there eventually. And the reader needs to feel that urgency in both forms; otherwise you're wasting their time and they won't turn the pages.

In the final stretches of working on this book, I came to love the structural challenges of putting it together. The novel alternates among three third-person voices, and I loved the almost symphonic orchestration required. The arranging of the overall composition so the different parts echoed one another and advanced the story while at the same time gave the reader an absorbing and moving and artful experience. I also loved working with plot. Which surprised me; I had no idea. In short stories, plot can really be secondary; you can get away with very little of that in short fiction. But a good novel, for me, needs a good plot. And I found I loved working with that, creating what readers are now telling me is a page-turner. I shouldn't have been so surprised. I've always read for plot. But as a first-time novelist, you never know what you can pull off.

I'm looking forward to spending time on a new story I began in California during my son's medical treatment. I worked on it in the Santa Monica Public Library, but it's set in central Massachusetts. Age is also much on my mind. I turned 60 this year, which feels sort of shocking - what? 60? when did that happen? - and it's definitely influencing my work. But in a good way. I don't have time to horse around. And I feel a certain courage to say what I have to say. I'm old enough, finally.

Nothing at all! These were great questions. Thanks for giving me the opportunity to mull on them.

Hi Joan -- congrats on the new book! I'm looking forward to reading it. Caroline, this is a wonderful interview with Joan (we were classmates at Vermont College).