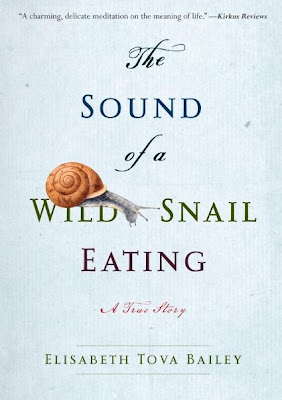 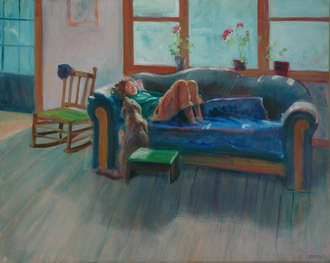 When I heard of The Sound of A Wild Snail Eating by Elisabeth Tova Bailey,(that's her portrait above), I was instantly fascinated. I knew what you could learn from a relationship with any sort of animal (I had a pet tortoise for 20 years, and he saved my life on a regular basis), and the book sounded completely wonderful. It is, and I've already bought a few copies to give as gifts to prove it. A meditation on illness, it's really, to me, a book about noticing life, about realizing the myriad of gifts available to you from the tiniest creatures. I can't thank Elisabeth enough for answering my questions.

At what point did you realize this could be something you wanted to write about? Did the idea form during the time you had the snail(s)? Or were you then too involved to distance yourself enough to write it?

During the year I watched the snail I wanted to write short stories. Nonfiction writing had never interested me—I thought it was too dull. When a friend suggested that I write about the snail I remember saying “That’s not what I want to write about!” The snail had been my bedside companion 24/7, and my relationship with it seemed entirely personal and would have felt impossible to put into words at that point—even if I had wanted to do so. I did scrawl a few notes at the time on a scrap of paper, but that was it. However, toward the end of the year I wrote down some observations for my friends who had adopted the offspring. But many years passed before I wondered if there was more to write. I needed both time and perspective in order to expand the observations into a book, and the book really is a biographical thank-you to the snail for getting me through a particularly tough year.

It’s fascinating that concentrating on another living being, albeit a tiny one, helped you adjust to the change in your life circumstances. Do you think it you hadn’t been ill, you would have taken the time to be so mesmerized?

If I had not been ill I could never have spent so much time observing a snail! Illness had taken me so far down that I was quite withdrawn from human society. When the snail came to join me it was the perfect companion with its microcosmic world and slow speed. I had this window into the snail’s world, and its world felt like a much better fit to my own life as I couldn’t partake much in my human world. Though as readers will discover, toward the end of the book there is a shift, but I don’t want to give away too much.

I read that you didn’t want to write about your illness, that this book is a thank you to the snail. I’m a big believer that giving illness a narrative can make it more manageable or even have healing potential. Would you agree with that?

Writing directly about illness depresses me, but I do know it helps some people, so I think that’s a very individual situation. For me, it was the one subject I never wanted to write about. It is impossible to put into words the infinite losses and challenges with which one lives. There would have been no structure and no plot and it would have been a quagmire. However, I could write about the snail. But without the illness there would have been no snail-watching, so I couldn’t ignore the illness completely. But I found that I could write about my illness as the backdrop for the snail’s appearance. This also gave the reader a way to enter into the story, just as I had, and so the reader can become engaged in the unusual interspecies relationship that developed.

As your world appeared to grow smaller from your illness, in some ways, it grew larger from focusing on the snail. Now that the snail is no longer with you, do you miss it? And what creatures occupy your attention now?

As I mention in the book any focus or connection no matter how small or large helps us get through tough circumstances. Yes, I will always miss that snail! But I also don’t like to keep a wild animal outside of its natural habitat. During the years I worked on the book the snail was of course much in my mind, so it was with me in spirit. Life moves on and our connections shift and change. The book in a sense has kept me connected and centered throughout the years that I’ve worked on it. I always like to live with an animal as I think it keeps me more aware of my senses and of other ways of being. I particularly like to observe the interactions between cats and dogs that get along—I always find that a touching interspecies relationship.

Wow, that’s a complex question. Chronic illness changes one’s life completely even in ways that one can never fully comprehend. My experience with the snail didn’t really change me at the time. It was an interspecies relationship that is now a memory, the way one has memories of any such companionship with a cat, dog, or other animal, so I wouldn’t say that the snail changed me. It brought me comfort, expanded my world, and got me through a tough time. The snail gave me hope. It was in a real sense a sort of emotional life preserver. However, I think working on the book about the snail did change me. I found myself searching for an answer as to why illness exists, and I did come to an understanding that pathogens are as much a part of the natural world as a snail and a human. Exploring the fascinating similarities and differences between two different animal groups also lead me to a deeper understanding of life itself. But those questions, explorations, and understandings came through working on and shaping the book, but then there would be no book without the snail. So perhaps this is a circular answer!

Can you talk about what your life is like now? And what you are working on?

My “window” of activity on any given day is very small and always unpredictable. Right now I am just trying to keep up with what book publicity I can manage. I can’t travel, but there are periodic phone and web interviews. The UK edition of the book comes out in a few weeks and an Australian edition is in the works as well.

Elisabeth,
I started your lovely book. What a beauty. So glad Caroline told me about it.

Caroline, thank you for posting your interview- I have a stage four cancer and I am enjoying this book so much- I might have to sart over when I'm done -it is a book to be read at a leisurely pace-- You asked perfect questions thank you for shiring the answers

I've just finished reading this lovely book and loved it's gentleness and found it a peaceful book. It's also certainly made me look at snails in a different light to what I used to! Awesome interview btw.

I have read a few just right stuff here. Certainly worth bookmarking for revisiting.
I wonder how much effort you put to create this type
of great informative website.