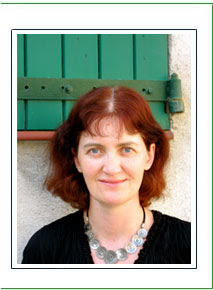 I first picked up Room when I was at BEA. I've read and loved Emma Donoghue's work before, (Slammerkin, The Woman Who Gave Birth To Rabbits, The Sealed Letter, Landing, and more) but this particular book was life-changing. Long-listed for the Man Booker Prize, Room is narrated by five-year-old Jack, who lives in a single room with his Ma and has never been outside, and like the best novels, it makes you see and experience the world differently. To say I loved this book with a passion is putting it mildly, but I refuse to loan it out because I feel the need for it to be right where it is--in my writing office where I can reread it.

Emma's website not only lets you explore the world of Room, but you can also download a pdf of the floorplan, watch the haunting book trailer, and find lots of other special extras. Thank you so, so much Emma for letting me pepper you with questions. I'm honored to have you here.

What’s so unsettling about ROOM is its unique and surprising perspective. While there has been coverage of people held as sexual captives, I don’t think we’ve ever been let inside this situation from the viewpoint of a child born into that captivity—and a happy, seemingly well-adjusted boy, at that. What sparked your desire to tell the story from his point of view?

I would never have told this story any other way. Ma telling her own tale of kidnap, endless rape, and unassisted birth would have been too obviously poignant (and hideous) a proposition. What I glimpsed when the idea for ROOM first came to me is that Jack could tell us a whole other story that would have elements of comedy, parent-child love story, science fiction and fairy tale.

What was the research like for you? How much is true and how much is imagined?

None of it is true in the sense of being closely based on any one kidnap case; although the headlines about the Fritzls were what gave me the idea in the first place, I was careful to steer my scenario away from theirs and any others I read about. (And Jaycee Dugard wasn't discovered, as it happens, until my novel was finished.) But all of it is true in the sense of being as plausible as I could make it: I read extensively not just on kidnapping but on children raised in peculiar or neglectful settings, adults in solitary confinement, healthy family dynamics, the treatment of post-traumatic stress disorder...

Reading Room was intense and riveting and unsettling. Were there any points in writing the novel where you were unsure if you could complete the book?

No, This one was easy. I've never had such certainty about every aspect of a book, from point of view, to the opening and closing scenes, to how much time to cover.

I’m obsessed by process, so could you talk a bit about how you wrote this book and what were the particular challenges?

I did a couple months of research first, almost entirely on the Internet, which is a first for me. That was often skin-crawling and occasionally made me burst into tears. Then I had to work out Jack's voice: for this I analysed my five-year-old son's speech like a linguist, then came up with a form of English which is actually halfway between adult and child, so readers would believe in his youth without being enraged by his rambling. The drafting itself I did in six months while my daughter was in part-time daycare, and all I sweated over were subtle details, such as whether their captor would allow them to have a pair of scissors, and the balance between the grim and the happy at each point.

The voice of Jack is one of the real pleasures of the book—he’ a captive, but he doesn’t know or understand it, and instead is a happy, loving, loved child that we, the reader, also come to adore. His curiosity makes us look at the world of the room differently. Without giving away the ending, do you think it’s possible for Jack, and/or children like Jack, to ever be able to be fully okay in the world?

He'll be grand: there seems to be almost no limit to what a five-year-old can adapt to, especially if they've been parented well. Ma is another story, because adults hold onto their pain.

The peculiar effects of publicity. I've always considered it 'no bother', as we say in Ireland, but these days I'm doing so much more of it (ten phone interviews in a row, the other day!) that I feel intellectually vacuous!

Ah, Here's where I'm particularly vacuous at the moment: can't think of any.

fascinating. i absolutely devoured that book (after putting it off for several days, fearing that it would be too depressing). now my husband is devouring it.

and it's true that the book would have been impossibly, unrelentingly bleak had it been written from Ma's point of view. there's no way I could have managed to read that book, I think.

Oh I want more! Emma, I was left haunted and touched so deeply by your book that I haven't been able to find another I like equally well yet.

Thank you for a magnificent experience.

Lovely interview. Adored the book (as did my 16-year-old son). Interesting to hear about the decision (or non-decision) to have Jack narrate.