Polly Frost talks about being funny 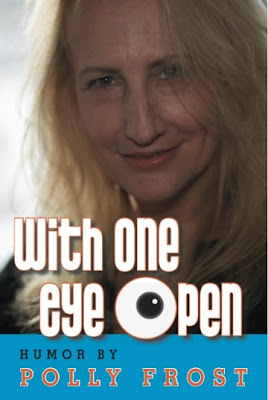 Polly Frost is hilarious. An author, playwright, journalist and media producer, she's the author of With One Eye Open, a collection of 25 of hr humor pieces published in The New Yorker, The Atlantic, The New York Times, Narrative and Grin & Tonic. Plus, she has a great name (wouldn't you love to be called Polly Frost?) Here, Polly talks about the business of being funny. Thank you so, so much, Polly

I've been publishing humor pieces for twenty-five years. I’m lucky to be have worked with some of the best humor editors, especially Daniel Menaker, who was my editor at The New Yorker when I began and who now runs Grin & Tonic, which is a humor feature on the Barnes and Noble Nook and on their Review. I’m also fortunate to be married to Ray Sawhill, who’s a very funny writer himself and a wonderful comedy collaborator. (We wrote a comic -- and erotic! -- theater project together, “Sex Scenes,” which ran for three years in NYC at Cornelia Street Cafe and which we toured around the country in 2007.)

But that question about turning life into humor became a key part of my writing process from mid-2009 to early 2010. It was the most difficult stretch I ever went through, yet a great number of the humor pieces in my book “With One Eye Open” were written during that time.

In the summer of 2009 my brother Daniel, who’d been a gifted cancer surgeon, died of complications from Parkinson’s. He’d gotten it as a young man. The world seemed an irrational and precarious place to me, one that attacked people like my brother for no rhyme or reason.

It was hard for me to get much of anything done during that period. But writing humor came easily. That’s because you don’t have to be going through a really happy period in your life to write funny. As most humorists know, bad times can be great times to write comedy.

For example, one of the first things that happened to me the day after my brother died turned into a humor piece.

My mother had asked me to call or email people who needed to know about it, because she didn’t feel up to it. Nearly everyone I contacted was wonderful and supportive. There was one person, though, whose response to my phoning and telling her that my brother had died was to say, “You know, I just had a massage and the woman who gave it to me spent the entire time talking about her terrible childhood.”

I nearly dropped the phone. I have to admit I got really angry at her. I remember screaming something like, “What one earth does that have to do with what I just told you?”

To which she said, “You’re just upset.”

Now, I’m sure that woman was trying in her own way, but everything she said and did after that just made me angrier and angrier. She wrote me an email about how my brother dying reminded her that her own husband might die, to which I responded that we will all eventually die, but in fact, but her husband was at that moment very much alive while my brother wasn’t.

Then she wrote me another email in which she said she was surrounded by too many “wounded birds.”

In a rage I walked out to where my husband was sitting and said, “Why do I have to put up with this woman at this moment in my life?”

He looked at me and said, “Because she’s a gift to you.”

“Go write a humor piece about her,” he said.

So I did. My husband knew what he was talking about: she was a gift. Actually, she inspired not just one, but several humor pieces! In life she was someone I never wanted to see again, but on the page she was someone I eagerly looked forward to writing about.

I cite this example because I often get told by other writers -- writers who aren’t professional humorists -- that they’d like to be funny, but don’t know how.

Here’s my advice: stop trying! Trying to be funny is the surest way not to be. If you think about actors who portray comic characters, the ones who are the funniest are the ones who take their characters the most seriously. It’s the same thing with writing comedy. You have to take your character very seriously and take their tragedies seriously. If you do that, you’ll find the comedy in the character.

If you’re open to it, life will constantly give you hilarious material. You just have to get it down and not get in the way of it. That’s your job as a humor writer.

I love this, Polly! Your story about the insensitive woman made me smile/tear up at the same time--my favorite emotional response to the written word is that laugh/cry impulse. And I love your analysis of where "funny" comes from--it's a terrific reminder for me, as a fiction writer, to approach all characters (even the ones whose actions generate humor) with respect.

Loved this essay. And so true! I'm not a humorist, but some of the things that have ended up in my books are funny, and I don't know until after the fact.

Thank you, Tanya and Susanne -- I was fascinated by your experiences of writing humor!

Frostian insight at its best!

(I find the "Time" part of the equation grows shorter and shorter...at least around here.)

Wonderful post! So glad to have found your blog.

Hi Polly. I enjoyed meeting you at Harry's Restaurant. I am Maude's sister. I planned to go to your show with Maude, but I had just finished working 3 nights in a row (nurse), and my body would not cooperate! I slept 19 out of 24 hours. I just could not make myself stop sleeping. Loved the comments about humor, one of my favorite things in the entire world. I will not miss your next show: I hope that you do another one soon in Santa Barbara. Blessings, Polly! Trudy King