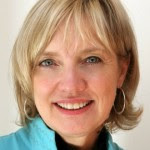 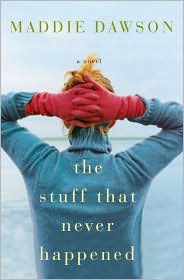 While I am still navigating the wilds of my new novel (without a compass and the water is running low), the wonderful Maddie Dawson agreed to write a guest blog on the back story of her spectacularly good new novel, The Stuff That Never Happened. Thank you Maddie!

Nobody knows for sure where novels come from. I happen to believe they assemble themselves all on their own, haphazardly picking up little observations here and there and then smooshing them all together, like a big, out-of-control jambalaya recipe. You know how it is: your sister’s rough-and-ready laugh merges with the song playing on the radio, (which reminds you of your sixteenth birthday party), and then somehow joins up with a story you overheard the Starbucks barista telling about her ex-husband moving out of their apartment and taking everything with him, even the light bulbs in their sockets.

By the time these wisps organize themselves into a book with characters and a plot, they’re nothing like the original moments, of course. They’ve gone through so many changes that you can’t even remember why they pulled at you in the first place—and when people say (as they will), “Where did you get the idea for this novel?” you have to make up something because honestly, you can’t even remember.

Except for this time.

I’m a little embarrassed about this, but I know exactly where my novel came from. The Stuff That Never Happened happened because of three things: a once-loved man, a nearly empty train car, and four women sharing a bottle of wine at a business lunch.

And I remember very clearly the moment when I thought, “I am going to write a book!”

First we have to back up some years, back to when I was a newly divorced single mom, raising a baby and a toddler, and working as a newspaper reporter. My husband had suddenly upped and left me for his lab partner because, as he put it, so comically, “She’s not as tired as you are.” I don’t know this for a fact, but it also might have worked to her advantage that she did not have spit-up stains on the shoulders of all her clothing.

But, hey, it was the 1980s, when everybody seemed to be in a state of marital flux. It was a veritable epidemic. We were in a whole community of friends who were juggling babies, careers, sleep deprivation, and the abrupt realization that, as John Lennon put it, what we were living was actually our lives.

And so it happened that I fell in love with one of the most confused, sleep-deprived friends of all—a kind, philosophical, ironic, politically-minded, hilarious guy who wasn’t even married but was in an off-again, on-again, mostly-committed relationship. I first knew I was in love when he came over and washed my dishes and picked up the kids’ toys while he waited for me to edit a paper he’d written. A man who could wash dishes? I knew I’d follow him anywhere.

To misquote Tolstoy, all happy love affairs are alike, and all unhappy ones are unhappy in their own way. Over the next six years, we had some great times, marinating in both love and agony. We met in secret, we met publicly. We wrote love notes. We read poetry. We took long walks. And when all that wore thin, we started splitting up and then reconciling. Again and again and again, probably 458,000 times. We were that couple, exasperating everyone who knew us.

And then, as we approached our seventh year of this, I suddenly broke it off for good. We had one more evening of agony, but I was already seeing a new man who made me laugh and who didn’t seem to think love had to be so difficult all the time. I found myself falling in love with normalcy—and, reader, I married him. Got pregnant with a new child, bought a house in the suburbs, acquired a lawn mower and a pension plan, and vowed never to turn back to my old lover again.

Fast forward fifteen years. One day I got on the train to New York, on my way to meet with my editor. I had my laptop, and because the battery was low, I needed to find a car that had a working electrical outlet—not an easy thing on Metro North. So I moved from car to car, until finally I came to the very last car on the train, where—voila! There was an outlet. Five seconds after I settled down for two luxurious hours of writing, I looked up, and there was my old lover, looking right at me.

It was a gift, an unasked-for moment out of our usual lives. I would have never contacted him on my own, but here I was being given a chance to rehash our past, to figure out what it had all meant, if indeed it had meant anything at all.

So we sat together and talked about our lives, our old love for each other, our breakup, our kids, our marriages. And…well, it wasn’t all that dramatic. There was no rush of passion and regret. I wasn’t tempted to go back to him for the 458,001st time. In

fact, I came away relieved that I had a happy marriage and feeling so aware of all his maddening traits--his vagueness and over-protective sense of privacy. By the time I got off the train, I was glad to be away from him--and so surprised to find that was my reaction.

Later that day, when I went to my lunch meeting with my editor, publisher, and some other authors, I couldn’t stop thinking about it. All these years! We all drank a bottle of wine and then, as so often happens with women, we got right down to it, and starting telling each other our man stories—stories about the ones we had loved, the ones we missed, the ones we regretted, the ones we were well rid of. We laughed, we whooped and screamed and carried on; in short, we did everything but pound the table with our shoes. And at one point, my editor leaned over and whispered to me, “This is your novel calling.”

She was right. (A good editor is usually right, I’ve noticed.) Once the lunch was over, I gathered up my wobbly self and went to a Starbucks, where I started writing a story of a man and woman who were once in love and who run into each other again. Quickly it was clear that it wasn’t my real story at all. These were new characters and their circumstances were completely different from mine—but what I wanted to capture through them was the poignancy of great love and great disappointment and the ways we have of glorifying the past and nearly missing out on the life that’s in front of us.

The story of Annabelle and Grant McKay is a story of a marriage and an affair that happened to it—and of the reconciliation agreement the couple made never to speak of that time again. The story seemed to come to me in two parts—the 1970s, with the early days of their courtship and marriage and the affair, and then the present, 2005, when their children have left home, and they are coping with the empty nest and the loneliness that has grown up between them. Annabelle, who has always dreamed of her old lover, Jeremiah, now explores the layers of all the marriages she knows—her own 28 year union with Grant, her parents’, her lover’s, and then her daughter’s.

Reviewers have called this a story of a scandal, and said that it’s a “chick lit” tale of extramarital sex and “the one who got away.” Far be it from me to argue with anybody who’s trying to say something exciting to sell a book, particularly mine! But honestly, I’m not convinced that’s what this book is about. While I was writing it, I was feeling deeply involved with Annabelle’s dilemmas—the common human dilemma of misplaced hope, the war of family ties vs. one’s own needs, and the unmasking of the wrong-headed stories we tell ourselves as we go through our lives. It’s also a story about mothers and daughters and the ways they can’t truly see each other, and about our love for our work, and our failures to communicate our deepest thoughts to those people who matter most to us.

In the end, as with all creative work, even though I see it through the prism of my own life, I'm aware always that the characters and the story line take on a life of their own someplace in my subconscious, the place where novels happily start assembling themselves quite without my permission or control.

And thank goodness for that.

Can't wait to read it, Maddie! What a rollercoaster ride of a backstory. The cover and title are amazing, too! Cheers from Denver, Karen