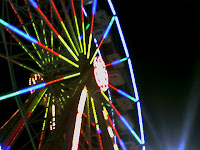 Isn't that gorgeous? Some people vacation by sprawling on a beach or doing nothing. Not us. Every morning we biked ten miles on the boardwalk, then played minigolf, then hit the arcades (we do love our honkytonk) and then went to the ocean for a grand total of an hour at most (we don't love the frying pan quality of the beach) and then off to a movie, and then to a whale watch and then to the go karts and then to the rides and then to another movie and then...

I did have a jaws moment. My son was in the surf and i noticed a black fin slicing through the water. I stared, blinked, and there it was again, zooming closer. I became cool, clear, determined, and I strode into the water and grabbed Max who was becoming panicked by my expression. "Shark," I said and then I was about to shout SHARK to get everyone else out, when Jeff ran into the water and grabbed me, shaking his head and pointing. "Dolphin!" he said, and there they were. Three of them, arcing out of the water and back again. I didn't know dolphins swam so close to shore, but then again, it IS their ocean and not ours.

I also fell smash bang off my bike and bonked my head so soundly that three, count them, three bikini'd nurses rushed to my rescue. I have a bump the size of a doll's frying pan over my right eye, but I'm better than the woman we saw who tripped in front of a restaurant where we were eating and broke her nose in a torrent of blood.

I think it's because as writers we tend to sit in our offices all day, breaking for lunch, so a vacation to us is doing as much as we possible can. Which leads me to an important question.

What is the worst candy you have ever had? I contend that it's Circus Peanuts, those orangey soft candies that are supposed to look like peanuts (if you live on Jupiter, maybe), but my son insists that Swedish fish are the most disgusting. Jeff votes for Boston Baked beans, those little rat pellets of flavor.
Posted by Caroline at 8:15 PM

I love Circus Peanuts!!!What candy do I despise? That's a hard one. I'd say black licorice though.

That picture was brilliant.

I also went whale watching 2 times this summer in Cape Cod.Ive become a whale addict. We saw over 10 whales, 5 of which were up close and personal- I posted the movies on my blog- typical oohhhss and aawwhhs, prob what you all were saying as well. Speaking of whales- so sad about the cute baby one in Australia trying to nurse the bottom of th boats!

Enjoy your trip!Take it easy with that bump.

I'm so jealous you saw whales. And my bump and I are now home, working (and not going anywhere near Circus Peanuts!)

Worst candy? Have to be these weird fake peanut butter things wrapped in shiny festive plastic that my piano teacher in fifth grade kept in a cut glass bowl atop his Steinway. Ugh! They looked so enticing to a chubby, sweet-toothed ten-year-old, but were hard as gravel and nearly broke your teeth before you realized they had no flavor whatsoever.

Yes, the worst. Maybe they were just old.

Love the picture, and you've made me long for the honkytonk holiday! Fast healing for that bump, and welcome home!

Ew, those sound terrible! I vaguely remember something that was this disgusting liquid in a waxy bottle. You bit off the bottle and sucked out the sugar syrup. Ugh. Was it called Lick-a-Maid? (A disgusting name, too!)

Caroline welcome back! The blogosphere just wasn't nearly as enjoyable without you!

I have to say I nearly laughed my head off at Lick-A-Maid!! It's not what you are thinking of...those gross candies I think were called Bottle tops. Lick-em-aid was delicious! A compressed sugar stick that you stuck into two different flavored sugar packets...a recipe for a sugar coma if there ever was one.

Most disgusting candy: those disgusting fake hard molasses toffee like things that come in rectangles and are wrapped in black and orange wax paper at Halloween...ugh!

Most delicious: Wine Gums. Large gummy like candies that are multi colored, a bit sour and supposedly flavored like wine...but not really. Available in Canada and Britain...so addictive!

Glad you had a great trip and hope that your bump gets better fast!

Steinway candy is the worst... they should just stick to building pianos.

A close second to worst candy are the black jujubees... not because they taste bad...you just get sick of pulling them off your shoes in movie theatres.

What's Steinway candy? I also loathe dots, those hard candy buttons on a long strip of paper. A real waste of sugar. Oh, and wait! What is more gross than candy necklaces, that kids suck on and then continue to WEAR?

There are no such thing as Steinway candy... it was just a play on DavidG's story... :)

Yeah... dots are right up there with candy corn and cotton candy as pure waste of candy time... but at least cotton candy is fun to eat...

Oh...my sense of humor must still be at the beach. But I LIKE candy corn!

Don't think I've had those. But everyone knows peeps are the best.

I, too, like candy corn, Caroline! But not dots. I seem to recall eating more paper than actual sugar dots. Maybe they just tasted like the paper?