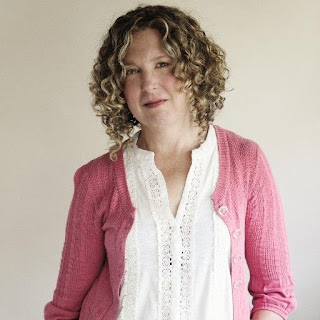 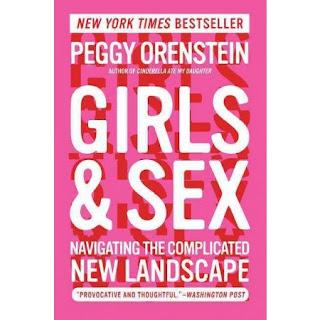 Peggy Orenstein is the author of the New York Times bestsellers Girls & Sex, Cinderella Ate my Daughter, Waiting for Daisy, Flux: Women on Sex, Work, Kids, Love and Life in a Half-Changed World, and Young Women, Self-Esteem and the Confidence Gap. A contributing writer for the New York Times Magazine, she's also one of the fiercest, smartest women on the planet. I'm so honored to host her here! Thank you so much, Peggy!

Why given the way the women's movement has been making such strides, and more and more people are talking about different kinds of sexuality, are girls and young women so unwilling to ask for what they want from boys and young men? How on earth did this happen and what can we do about this?

I love the tone of that last question, it communicates the astonishment that I felt when I first started interviewing girls. What happened???? And I think that a very deceptive thing has been going on: young women feel entitled to engage in sexual behavior, but they don’t necessarily feel entitled to enjoy it. There’s the illusion that they have agency and choice and control because they have sexual encounters or hook up or whatever—combined with the media selling this narrow, distorted vision of “sexiness” as the way they’re supposed to express confidence—but in fact they are completely disconnected from their bodies.

And I don’t know that we should be so surprised—it’s not like girls are growing up in a culture that values female bodies, or encourages girls to understand their bodies, except in relation to how those bodies can please others. The media tells them what makes them sexually “confident” is looking a certain way, attracting male attention, being desirable, not necessarily feeling or understanding their own desires.

In their sex ed classes—whether they are abstinence-based or “comprehensive”— boys’ puberty is characterized by erections and ejaculations while girls’ is characterized by…periods. And unwanted pregnancy. Not the same thing. Even in something like American Girl’s  Care and Keeping of You, Book 2 in which they have a diagram of the external female genitalia, they don’t include the clitoris. They just don’t name it. Not surprisingly, fewer than half of girls age 14-17 have ever masturbated. Then they go into their partnered encounters and we somehow expect that they’ll feel it is about them, that they will have a voice, that they will magically be able to articulate their desires, wants needs, limits. It’s absolutely unrealistic.

My favorite phrase ever in talking about this was coined Sarah McClelland, a psychologist at University of Michigan: “intimate justice.” That’s the that sex has political implications as well as personal ones, just like …who does the dishes in your home or who vacuums the rug. And it brings up similar issues of inequality, economic disparity, violence, physical and mental health. “Intimate justice” asks us to consider: who is entitled to engage in a sexual experience? Who is entitled to enjoy it? Who is the primary beneficiary? How does each partner define good enough?

Honestly? Those questions are really tricky—and sometimes traumatic—for adult women. But when we’re talking about girls and their early sexual experiences, one thing I kept coming back to was that…I didn’t want those experiences to be something that girls had to get over.

Please would you consider writing a book about boy/young men culture and how we can teach them the value of girls--and do you think this will teach girls the value of girls, or is this just another thing coming from another gender?

What was it like interviewing all of these girls? What surprised you the most? Were you able to convince any of these girls toward something different than what they thought was their place in the culture?

I love talking to girls. I just love it. I will say that at first it was super hard to talk about sex. For one thing I was shocked. was shocked by the dehumanization of the hookup culture, where sex precedes rather than arises from intimacy. I was shocked by their willingness to accept male pleasure as the goal of a sexual encounter—especially the whole issue of the blow job in hookups, the one-way aspect of that. Again, that intimate justice perspective. And I had to learn to listen, to hear their experience told their way with their concerns and their explanations and to hear that without judgment before I really got the kind of deep interviews I was hoping for and that I think are in the book.

It wasn’t my job to convince my interview subjects that they should be conducting their lives differently. I’m a journalist. But I have stayed in touch with some of them and even those relatively short interviews had a big impact on them, whether it was changing their majors, talking to a boyfriend more honestly, being more mindful of campus social life in making college choices….And that keeps going. I get emails all the time from girls who say the book changed their perspective or made them feel less alone, or gave them something to think about. It’s been tremendously rewarding. I get similar emails from boys, by the way, which was part of why I decided to start the new book.

Why oh why is frat culture still around? And do any of these girls realize that by playing into its rules they are allowing it to survive? Couldn't it be more like Lysistrata, where girls say fine, act that boorish way and we're never sleeping with you. Consider us, be kind, and we'll consider you? And what about educating our boys?

What about those with fluid or trans genders? Is navigating the sexual scene any earlier?
Earlier? Kids are coming out earlier is that what you mean? That makes parental support more important than ever.

I didn’t really look at trans kids, but I did interview gay and bisexual girls. And there was a really interesting difference—or kind of a similarity, I guess. Girls are more likely than boys to measure their pleasure by their partner’s satisfaction. That holds true regardless of the gender of the partner. So in same sex encounters, the orgasm gap that you see in hetero encounters disappears, and young women climax at the same rate as men. Lesbian and bisexual girls would talk to me about feeling liberated to get “off the script,” feeling free to create a sexual encounter that worked for them. It made sex less of a race to a goal than a pool of experiences involving closeness, desire, arousal, touch, intimacy….And it’s worth asking young people, “Who is truly the more sexually ‘experienced’ person:  The one who has kissed a partner for three hours and experimented with erotic tension and sensuality and communication or the one who gets wasted at a party and hooks up with a random so they can cash in their v-card before college?

You write that many college boys think it's "hilarious" to post videos of raping someone. I can't help but think that something deeper is going on--is it fear of women so they have to make degrading them funny?

Not “many,” that’s an overstatement. But I did become conscious of the way guys used hilarious in a situation that an adult would find disturbing, at best. I don’t think it was about degrading women. I think it was about insecurity. I think they use “hilarious”when they are unsure of how to respond, particularly to something that is both sexually explicit and dehumanizing, something that perhaps actually upsets them, offends them, unnerves them, repulses them, confuses them, or defies their ethics. “Hilarious” is safe. It offers distance, allowing them to look without feeling, without compromising their masculinity.

When is the right time to tell your teenager these things?  Do you talk about rape when a girl is 11?  If you try when she is 15, chances are she's going to roll her eyes at you and not want to hear it?

“Things” is too broad. If you’re asking about sex education….It begins right away. In infancy. With naming body parts. With acknowledging to your 3-year- old that “Yes, it feels good to touch your vulva, Honey, but we don’t do it at Grandma’s Thanksgiving table, we do it in private.” Honestly, I think that we silo off sexuality into this special area like it’s different than everything else. But the same rules apply about ethics, responsibility, caring, compassion, being a good person that we try to cultivate in other realms of a child’s life. It’s all about raising a good citizen, a good person, you know? So when you tell your 5-year-old that if someone says they don’t want to be hugged you don’t hug them (or that if you say you don’t want to be hugged they can’t hug you—and that includes Great Aunt Nancy or whomever) that is a lesson in consent. Helping kids understand and deconstruct gendered media messages can happen from an early age as well. Or for girls, staying connected to pleasure in their bodies can take all kinds of forms—noticing how good the sun feels, how great that cookie tastes, slowing down, being aware, emphasizing feeling good and strong in our bodies.

As to the more nuts and bolts and/or explicit stuff, I would recommend parents read Talk to Me First by Deborah Roffman, For Goodness Sex by Al Vernacchio and parents of infants-age 13 read From Diapers to Dating by Debra Haffner. Parents of young children can have any of the book by Robie Harris in the house, and parents of high school and college students can give them S.E.X.: The All-You-Need-To-Know Sexuality Guide to Get You Through Your Teens and Twenties by Heather Corinna.Those are great resources for girls and for boys and any other gender kids identify as.

You mean aside from politics? Because that is pretty all-consuming in a way it never has been. I am worried about so many things at the moment, including about the rolling back of women’s rights and reproductive freedom. But because I’m working on the boy book, I’m actually more obsessed with the thoughts of teenage boys around sex than I have been in about, um, 30 years….
Posted by Caroline at 11:40 AM