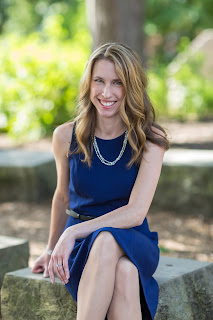 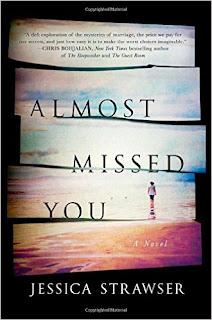 “Once in a great while, along comes a novel that defies the odds … leaving the reader both deeply moved and thoroughly astonished. ALMOST MISSED YOU is just such a book, by a writer’s writer with talent to spare. You may not have heard of Jessica Strawser today, but by tomorrow, everyone’s going to be talking about her and about this story.” —Jacquelyn Mitchard, New York Times bestselling author of The Deep End of the Ocean

Jessica Strawser is the editorial director of Writer's Digest Magazine and--my favorite--a debut novelist. I'm so honored to host her here. Thank you so much, Jessica!


I always think writers are haunted into writing their books. Was this the case for you with this one? Can you talk about it?
I suppose I do find the question of fate to be a haunting one: People talk a lot today about leaving things to the universe, about wondering if things are meant to be. Sometimes it’s hard not to wish or imagine things had turned out a different way; other times we really do thank our lucky stars. I wanted to write a story that brought these ideas to the forefront and made characters question whether they’d put too much—or too little—stock in the stories they’d told themselves (and each other).

What kind of writer are you? Do you outline, fly by the seat of your pen?
I like to try to have a general idea of where I’m going, but I can’t say I know how I’m going to get there. I write things as they come to me, when they’re most vivid, even if they’re out of order, and try to have faith that I’ll be able to fill in the blanks and pull it all together in the end. I do often wish I was more of an outliner—that seems like a far less anxiety-filled approach.

What I so deeply admired about ALMOST MISSED YOU is how you navigated three very different points of view to unfold your story--and you kept the suspense at fever pitch. How difficult was this to do? Did you ever hit any wrong turns (that you obviously corrected?)
I approached the story with the idea that we’re all unreliable narrators, to a certain extent, simply by virtue of the fact that our perspectives have limits—not to mention bias. In order to get the whole story in ALMOST MISSED YOU, we need all three perspectives: There isn’t a single character at the start of the story who knows the whole story. It was great fun trying to discern which points of view were key to reveal certain pieces and to put them all together like a puzzle. I did have some different turns in earlier drafts, but I don’t know that any of them were wrong—as the story could have been told in a number of different ways. (My next novel has a more linear structure and it’s not nearly as forgiving!)

You are the Editorial Director of Writer's Digest, the virtual Bible for writers. How did that job impact your job as an author, if at all?
Oh, goodness, how did it not? Consider that in the course of editing Writer's Digest, I’ve read each issue cover to cover no fewer than five times—that’s earnest, thorough repetition of written instruction and inspiration that has fueled my writing in ways both intentional and subconscious. Likewise, it’s made me feel a part of a community that shares a dream, from the bestsellers I’ve interviewed to the readers I’ve met at conferences or connected with online. The many conversations I’ve had for our cover stories—just think of it, forty-five minutes on the phone with David Sedaris, an hour with Alice Walker, with Lisa Gardner, with David Baldacci, with Debbie Macomber, with some of today’s most successful writers in virtually every genre—has given me access to some of the best insights into the writing life around, straight from the sources. When I close the door to my writing room every night, I don’t just remember their words—I hear their voices. Though I’m always the last one awake in my house, without fail, it makes me feel less alone.

You've been getting some amazing buzz for your novel! Does this make it easier or more difficult to write your next book because of the expectations? (Forgive me if I just added to your anxiety!)
I first turned in my next book a few months back, and am just now wrapping my revision addressing my editor’s comments, so there’s been a lot of overlap during which I’ve tried to just stay focused on whatever is in front of me, which has been one novel or the other consistently for the past 18 months, since I first received the two-book offer from St. Martin’s. I will say that writing a book under contract for the first time did bring with it an inherent pressure in the sense that people who I greatly respect—namely my editor and my agent, but also my publisher, my publicist, my marketing team, and an ever-growing list of supporters--have put their faith in me, and I don’t want to disappoint them.

What's obsessing you now and why?
Sleep—I’m getting less and less of it these days! Though with a five-year-old and a three-year-old, they are the focus of my energy and my joy most every “free” hour of the day. Recently my youngest has reached an age where she has the attention and the grasp of enough basic rules that we can begin to enjoy family game nights, and all four of us are loving this new phase. It’s the simple things: to light a fire and settle in with a silly deck of cards, or Connect Four, or this hilarious Horton Hears a Who game we got for Christmas. Even at this early stage I can recognize how fleeting these days are, when mom and dad are the preferred Friday night companions, no arm twisting involved, and I soak them up as best I can.