Why We March: Artisan Books Publisher Lia Ronnen talks about Signs of Protest and Hope 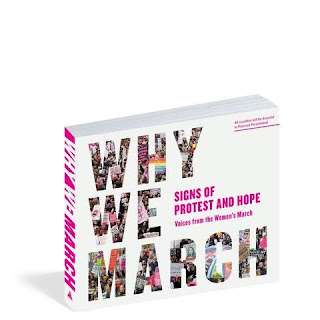 Anyone who knows me knows that I am political and I protest and I was a fierce marcher in the NYC Women's March. Artisan books is now putting out WHY WE MARCH: Signs of Protest and Hope, Voices from the Women's March, and all royalties are donated to Planned Parenthood. As Gloria Steinem says so eloquently in one of the book's first quotes: "The Constitution doesn't begin with, "I, the President." It begins with "We the People."

Artisan Books publisher and editorial director Lia Ronnen was generous in talking to me here. Thank you Lia,  for coming here to talk about the book and for producing such a great and important work.

I usually ask the why now question--why the reason for a book, but it's obvious for this particular book. And I think we need to get this book everywhere. What can people do to support you and the book?

Let me go back to the original question— why this book. The obvious answer is that the Women’s March was a momentous day that has set off a kind of revolution, and we wanted to commemorate that moment. But this is not entirely a book about the Women’s March— it is a book about the signs of the Women’s March. The voices of the Women’s March. As an illustrated book publisher, I’m obviously interested in the power of imagery in communicating information. I marched in D.C., and was astounded by the breadth and artistry of the signs. In truth, I think I spent the majority of my time at the March taking pictures. Being lost in a sea of signs proclaiming our beliefs, our intelligence, our humor, our fears, and our pride in our country was an extraordinarily powerful moment. And when I got home and flipped through the nearly hundred photos I took, I knew that seeing the images collectively—in book form— would make the ultimate rallying cry for those who protest the new administration.

All of the book’s royalties will be donated to Planned Parenthood, so buying the book is both a way to spread the message and to give back. Buying books is the best means of support, of course, but we are happy to share imagery and information with anyone who would like to write about the project. And if you want to help, here are things you can do. given by Lia Ronnen, the publisher and editorial director of Artisan books:

Who are the voices from the Women's March? How did you go about choosing which ones to put in the book?

The voices are as varied as we the people are. More than 3 million participated the Women’s March and sister marches in the U.S., and an estimated 2 million additional participated worldwide. Women. Men. Mothers and daughters. Friends. Families. Partners. Kids. Elderly. Black, white, brown. The diversity of people and messages was astounding, and we sought to capture that as best we could. We wanted to replicate the experience of encountering the signs and the people who carried them in real time. Some were shocking, some were funny. Some were devastating, and some were full of hope.
We focused on the diversity of the messages: Women’s rights. Immigrant’s rights. The right to health care. LGBTQ equality. We made sure to include the most popular messages of the day, as well as some wonderful viral photos, such as those that came out of Antarctica. While marches in the U.S. were our primary focus, we also included images from around the world— from Kosovo to Kenya, France to Australia. It’s hard to overestimate the power of seeing so many people from all over the world marching in solidarity.

What surprised you about talking to these marchers?

We actually didn’t interview anyone for the book. We included some excerpts from the speeches at the events, but otherwise the voices are represented through the signs.

I love the idea of a postcard writing event. Why do postcards work so well?

I think most people want to be active, but life can easily get in the way. Postcards are a no-fuss way to share our thoughts with our elected representatives. This is also a time when people are eager for community. We want to talk to each other about what is happening and share ideas for how we can get involved. So a postcard-writing event creates both an instant community and an easy way to implement action.

When everything seems so dire, the hope of this book is a call to action. Because this situation seems so unprecedented, do you think we need to take actions that are unprecedented? Do you have a sense of what works and what doesn’t?

I absolutely do. I grew up in a family that encouraged protest. Elie Wiesel’s famed Nobel peace prize acceptance speech was like doctrine in our home: "We must always take sides. Neutrality helps the oppressor, never the victim. Silence encourages the tormentor, never the tormented. Sometimes we must interfere.”

I’ve heard a lot of people say that we should be careful about being too partisan. That we need to focus on coming together instead of spending our time protesting. I disagree. These are not normal times. People’s basic rights are already being threatened daily. I don’t think I’m in a position to say what works and what doesn’t. But I do believe it’s necessary to stay informed and to communicate what we believe in. And to never question if any action is too small. Many local groups are forming to help make sense of all the information coming at us and to guide us in the many ways we can be helpful. I’ve always believed that getting involved at a local level is the best way to start. And sometimes, the answer is right around us, in the work we already do. It’s a wonderful feeling to be able to use one’s own work to make a difference. I feel awfully lucky to work for an independent company that green lights and embraces projects like WHY WE MARCH.

When is the book coming out and where can people get it?

It will be in stores and online by February 26.