How do art and life mesh? Number 1 NYT Bestselling author of Orphan Train, Christina Baker Kline talks about her ravishing new novel A PIECE OF THE WORLD, wearing Uggs, writing, and so much more 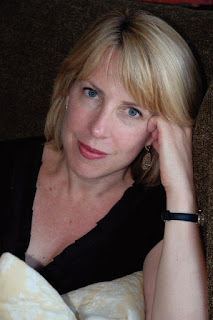 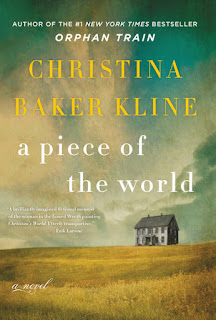 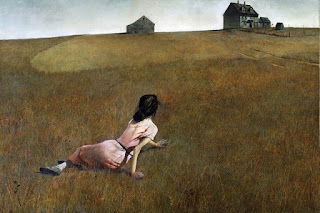 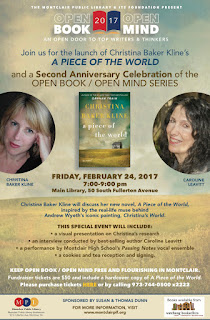 You know that magic moment when everything comes together and not only do you adore the writing--but the writer as well? That’s the way it for me with Christina Baker Kline. I first met her for lunch before Orphan Train was even published! We quickly bonded and I’ve been so ecstatic to see her star zooming into the stratosphere. She’s kind, funny, supportive, and every wonderful adjective I can think of.

Christina is the author Orphan Train, The Way Life Should Be, Sweet Water, Bird in Hand, and Desire Lines — and she’s written or edited five works of nonfiction. Her 2013 novel Orphan Train spent more than two years on the New York Times bestseller list, including five weeks at # 1, and was published in 40 countries. More than 100 communities and colleges have chosen it as a “One Book, One Read” selection. Her adaptation of Orphan Train for young readers is Orphan Train Girl (2017).

In addition to her novels, Kline has commissioned and edited two widely praised collections of original essays on the first year of parenthood and raising young children, Child of Mine and Room to Grow, and edited a book on grieving, Always Too Soon. She is coeditor, with Anne Burt, of a collection of personal essays called About Face: Women Write About What They See When They Look in the Mirror, and is co-author, with her mother, Christina Looper Baker, of a book on feminist mothers and daughters, The Conversation Begins. Her essays, articles, and reviews have appeared in The New York Times, the San Francisco Chronicle, Money, More, and Psychology Today, among other places.

Kline was born in Cambridge, England, and raised there as well as in the American South and Maine. She is a graduate of Yale, Cambridge, and the University of Virginia, where she was a Henry Hoyns Fellow in Fiction Writing. She has taught fiction and nonfiction writing, poetry, English literature, literary theory, and women’s studies at Yale, NYU, and Drew University, and served as Writer-in-Residence at Fordham University for four years. She is a recipient of several Geraldine R. Dodge Foundation Fellowships and Writer-in-Residence Fellowships at the Virginia Center for the Creative Arts.  She is on the advisory board of Roots & Wings, a foster-care organization in NJ; The Criterion Theatre in Bar Harbor, ME; and the Montclair Animal Shelter, and supports a number of libraries and other associations.

Kline lives in an old house in Montclair, New Jersey, with her husband, David Kline, and three sons, Hayden, Will, and Eli.  She spends as much time as possible in an even older house in Southwest Harbor, Maine.

AND SHE IS MY FRIEND!  AND you can see her speak this Friday (see the poster above) where I am lucky enough to interview her for part of the event. As always, a thousand thank-yous, Christina.

How did the research you did change how you felt about the painting--and about Christina Olson?

Perhaps surprisingly, I never got tired of looking at the painting. The more I learned about the real-life Christina Olson, the more I saw in it. Christina was a very private person. She was also obstinate, eccentric, wickedly funny, and extremely smart. Though some of the things she did –sabotaging her brother’s relationship with a woman he intended to marry, for example – might seem selfish and even mean-spirited, I came to feel a great deal of sympathy for her. She was taken out of school at the age of 12 to run the household; she had a painful and debilitating degenerative neurological disease; she was betrayed by a cad who strung her along for years. As I wrote this novel I thought about Flaubert’s response to a critic who chided him for writing about such an immoral woman: “Madame Bovary, c’est moi.” It’s my hope that by the end of A Piece of the World the reader deeply understands why Christina acted the way she did.

Was it difficult to let Christina Olson go when you were finished writing? Did you have any sense of how she might have felt about your book? (New Agey, but I want to know!)

I don’t feel I’ve let go of her. It was such a difficult book to write, and required such immersion, that I feel her presence still – almost as if she’s a living person. (How New Agey is that?!)

What was the most surprising thing about writing this novel?

That I managed to finish it, that it’s actually a novel. I was terrified I wouldn’t pull it off. I was determined to be as historically accurate as possible; the story – such as it is – really happened. I wanted to do the real-life story justice. Furthermore, I had to conjure a plot and a structure out of the air; Christina Olson barely left her house. I had to imbue ordinary moments with weight and meaning and create a kind of forward motion that was often internal. I’d wake up in the middle of the night in a cold sweat, wracked with anxiety. It was so stressful. In the course of writing the first draft of this novel I got a third-degree burn on my hand, 18 stitches in my forehead, and broke my shoulder. I think I was subconsciously becoming a disabled person. I was channeling Christina Olson.

I loved the whole idea of the muse being as important in a way as the artist himself. Wyeth and Christina had this definite bond. They understood each other. Do you think Wyeth's wife was jealous?

Betsy first met Christina when she was nine years old and Christina was 37. She adored Christina and spent hours helping her around the house. Eight years later, the same day that Betsy met 22-year-old Andy, she brought him to meet Christina -- as a kind of test, she later said. It was his habit to immerse himself in the lives of his subjects; he did so throughout his life. I think Betsy was glad that he’d found a subject that obsessed him, and I also think she appreciated Andy’s friendship with Christina, in part because she knew Christina was lonely.

It’s hard to turn away from the debacle that is the Trump administration, I must say. I’ve marched and signed petitions and sent postcards and posted about the ongoing atrocities, and now I’m determined to settle back into my work. (And keep my activism on a low boil.)

“What are you wearing?” I’m so glad you asked: my writing outfit of leggings, a long t-shirt and Uggs. It’s not beautiful but it sure is comfortable!

Can you talk at all about what you are thinking of doing next? I'm always fascinated!

I’m researching a new novel that takes place in Glasgow, London, and Australia in the 19th century. I love doing research and taking notes, shaping my story. It’s exciting to learn about other ways of living and other time periods. Writing is such seriously hard work, as you well know, Caroline – sometimes it goes very well, but even when it does, I wrestle with self-doubt. Research is a pure delight.