NPR's Scott Simon talks about Unforgettable: A Son, a Mother, and the Lessons of a Lifetime--and so much more 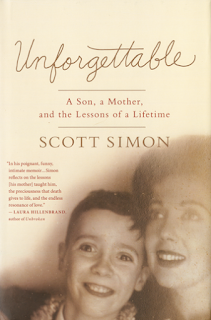 I don't remember when I first met Scott Simon but I do know it was on Twitter. I'm pretty sure he responded to a hopefully-witty tweet of mine, and then we began conversing online, which is pretty amazing to me considering he has 1.25 million fans.  He's totally hilarious, uncommonly smart, with a heart the size of Jupiter.

One of America's most admired writers and broadcasters, he's also the award-winning host of Weekend Edition Saturday--hey, it has over 4 million listeners and is also the most listened to news program on NPR. He also hosts TV specials, does stories for CBS Sunday Morning and he's the author of the highly acclaimed nonfiction books Home and Away: Memoir of a Fan, Jackie Robinson and the Integration of Baseball, and Baby, We Were Meant for Each Other. But wait, there's more! He's also the author of the extraordinary novels Pretty Birds, and Windy City. His new book, Unforgettable: A Son, a Mother, and the Lessons of a Lifetime, shares his beloved mother's dying process in a way that's actually filled with wonder and with life. It became an instant New York Times bestseller, a Morning Joe Book Club pick, and it is still racking up the raves.

I'm so thrilled to have Scott here. Thank you, Scott!

I know you were tweeting as all this was going on, and it had a profound impact on you. Did it change the way you saw social media--and see it now? Were you surprised by how many people your tweets touched?

Yes I was surprised, and it did change the way I see social media. I had always known that my mother was funny, charming, and wise. But to see so many others come to realize that about my mother, in real time, was extraordinary.

At the same time, though, social media has been growing and changing since my mother died in July, 2013. The tweets about my mother demonstrated to some that social media is as serious or frivolous as we choose to make it (and I do a little of both).

The pope (and I like this one a lot, by the way) reaches more people on Twitter, in a way, than he does in his appearances at St. Peter’s. A number of people who have declared their candidacies for president recently have used Twitter to do so. Even as the number of cat photos and fart jokes have also expanded.

I’ve now come to see social media platforms as our papyrus scrolls. It’s where a lot of people record scraps of their lives for others to read, ignore, respond to—or ignore and react to later (as Trevor Noah, the young comic chosen to succeed Jon Stewart at The Daily Show, has so recently discovered).

How did writing the book change you? What did you learn in writing it, about both yourself and your mother, that surprised you?

Writing the book confirmed for me why I became a writer; how, in a way, it just fulfilled me as the kid who always put out the class newspaper. I don’t keep things to myself (well, some things I do, but not many). There’s a good reason why I didn’t go into espionage work. It’s just in my nature to try to fathom my experience and share it with others, be it the war in Bosnia, an interview with Bill Cosby, or my mother’s death.

In our last days together, my mother did surprise me by confiding a conclusion she’d reached a long time ago: that my father, who was a serious alcoholic, more or less willed himself to die when I was sixteen because he couldn’t stop drinking and realized he would drag us down with him. “It was the last gift he could give us,” is how my mother put it.

My mother didn’t want me to grow up with that thought pressing on my mind. I’d blame myself for not helping my father more (which, by the way, no one can do for a real problem drinker, especially not a truculent teenager). I’d wonder if I should have done something. So she waited until she felt I could understand and accept my father’s death as a gift to tell me.

I also felt that your relationship with your mother was a blueprint for parents. She opened you up to the world, to art, and was so unconditionally loving, often in a non-traditional way.  Do you find yourself raising your daughters with her in mind?

Oh yes. Especially now, when she’s not around to encourage my wife and I to do that. But her presence, in a way, becomes more powerful in death. We see her lessons as nuggets of imperishable wisdom. We do what we can to drag our daughters through all kinds of places and experiences to let them know that—what was Auntie Mame’s phrase?—life’s a buffet and some poor bastards are starving to death. Our daughters, gosh knows, may often doubt my sanity. But not my love.

It boils down to this: love is all that endures. I’ve learned, too: you can take it with you. My mother sure did.

I was really interested in your descriptions of the hospital system. It was impossible to get in touch with your mother's pulmonologist, for example, when just her simple appearance would have soothed your mother immeasurably. Yet, the nurses should have been awarded guardian angel status. Can you talk a little more about that please?

The nurses were ever-present, kind, considerate, and wise. That seems to be who they are. But the doctors, near as I could tell, just look at laptops, enter keystrokes (and, in the case of the pulmonologist, send bills for “consultations” they make without seeing the patient). Medical care has become cold, remote, and data driven; maybe we’ve forced it to be that way, too, with so many demands. Our veterinarian is more attentive to our cat that my mother’s doctors were to her, or, presumably, any of their patients. I’m not sure why some of them have become doctors if they spend most of their time looking at screens, not people.

I've often asked you silly questions like this upcoming one, but now that I feel I know your mother through these pages, I want to know how do you think she would have answered this:  If you had to choose, would you rather be trapped in a room with a coconut crab (they are the size of really large dogs and they do eat dogs, as a matter of fact) or a giant squid?

Oh, a squid for sure. My mother loved dogs too much to be trapped with a coconut crab. But out of curiosity, how do they find a dog to eat? In the Great Barrier Reef? It seems to me that however giant a giant squid might be, they are soon rendered powerless on dry land. In which case, I think my mother would choose a giant squid and a tub of marinara sauce.

It’s got nothing to do with my mother but: the increasing use of drone warfare. War was destructive enough. But drone warfare offers the dotty illusion that damage can be inflicted on an enemy without cost or risk. I think it may be reaping a dangerous whirlwind.
Posted by Caroline at 1:54 PM