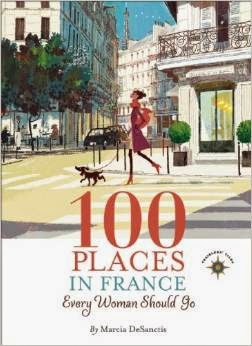 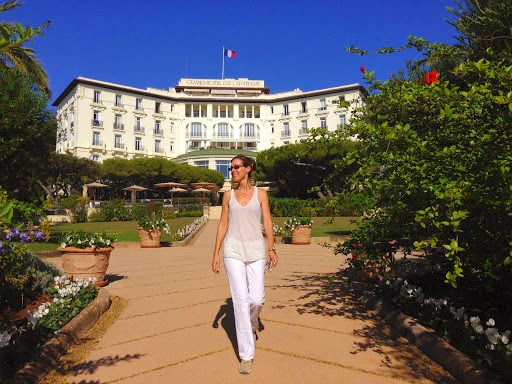 Put together the words France and "100 places" and I am ready to buy my plane ticket instantly.
Marcia DeSanctis is the New York Times bestselling author of 100 PLACES IN FRANCE EVERY WOMAN SHOULD GO (Travelers’ Tales/Solas House). She is a former television news producer who has worked for Barbara Walters, ABC, CBS, and NBC News.  An award-winning writer, her work has appeared in numerous publications including Vogue, Marie Claire, Town & Country, O the Oprah Magazine, National Geographic Traveler, More, Tin House, and The New York Times. Her travel essays have been widely anthologized, including four consecutive years in Best Woman’s Travel Writing, and she is the recipient of three Lowell Thomas Awards for excellence in travel journalism, as well as a Solas Award for best travel writing.And her book, is wonderful. I asked her if she'd write something for the blog, and I'm honored to host her here. Thank you. Marcia!

My book has the title of a guidebook, but it’s not that, not exactly. The New York Times described it as “essays on where to go in France and why”. That was accurate. It’s a book of essays and reported stories about place with quite a bit of travel advice mixed in.  I had to choose 100 places (or in some cases, experiences) about which I could do some deep writing, and hopefully, in the spirit of France, do it with a light hand, that integrates history with lots of descriptive detail about beautiful things.
What I chose to include had to fit one of several criteria. First, is there a story of a great woman in history around which I could build the piece? An example of that is the chapter on Château de Grignan, a place that is interlocked in the history of Madame de Sevigné, one of France’s great writers and most famous mothers, who has a pretty remarkable story herself. Second, is it something so beautiful that it causes our hearts to stop? The chapter on three stunning hikes in Provence is an example of this, as is Château Vaux le Vicomte. Etretat in Normandy. The Mer de Glace in Chamonix, which, by the way, is what inspired the climax of Mary Shelley’s Frankenstein. Third, is it a place where I have deep personal history, such as St. Tropez, from which I can cull memories and use as a bridge across time? And is also deeply, poetically, femininely French? Fourth, is it en experience so iconic that it had to be included – something like sampling chocolate in the Basque Country or celebrating Bastille Day on the Champs Elysées?

This book was an opportunity for me to crystallize lots of profound feelings for a country I know very well, a country that changed me. To try to express the transformative powers of France.  To put down on paper, in effect, all that I loved in France’s geographical and historical diversity, while trying to impart some wisdom and bon mots about traveling there.  Not just where to shop in Paris, but why. Not just my recommendation to snorkel on Porquerolles, but why. Not just to visit Versaille, but why. Versailles is not merely an extraordinary excursion from Paris. Rather, it is a place to understand why Marie Antoinette continues to fascinate us. It has little to do with her diamonds and wigs, and more to do with her story, on royalty and birthright. These are big, big themes – female ones – about marriage, family, aging, selflessness and selfishness, and we are confronted with them at Versailles.
Everything in travel can conspire to enlighten -– the architecture of devotion, the majesty of green spaces. I try to convey my awe wile sparing the details of how to get there, and where to eat.  I try to say, here is the bigger story. Sure you should go to that pretty lighthouse off the coast of Brittany. But when you’re there, try to decipher the metaphoric possibilities of a giant structure whose purpose is to help mortals weather storms. They are overpowering.
Most inspiring was the country’s rich history of powerful, brilliant women, and I enjoyed having the chance to unpack some thoughts about why we should care about them and the places where their memories are kept vital and vibrant. Catherine de Medicis, Joan of Arc, Colette, whose book Earthly Paradise was my go-to inspiration while writing this book. As was Edith Wharton’s A Motor Flight Through France. George Sand – the bored housewife turned rockstar romantic writer and lover of Chipin.  The painter Elisabeth Vigée le Brun, poet Louise Labé, Marie Curie. These women are giants. Eleanor of Aquitaine. There was never a woman with her stature and power, and there probably never will be. Much to my surprise, it’s possible to feel amazingly close to a long-departed queen when you are standing in her castle.
I was also motivated by the challenge of trying to create a sort of hybrid travel writing genre. France as a subject that has been covered to smithereens, so my challenge was to have an entirely different take. To take the country I lived in, worked in, was married in and which I love, and try to combine memoir and narrative with advice, and hopefully, to carry the reader along with me on this journey. My goal was not to overemphasize the girly tropes of champagne and perfume and fashion. I really attempted to forge some fresh language (in fact, tacked up on my wall, I kept a running list of words and expressions I wanted to avoid. No to “hidden gem”, “verdant”, “ooh la la” and “city of light” or “golden”).  I was quite inspired by this quest: to convey my love for France and even its inescapable clichés and to do so in a respectful and hopefully original way.
Posted by Caroline at 12:29 PM