The fabulous and funny Nick Belardes talks about A People's History of the Peculiar, being psychic, being impatient, and all things bizarre

I first met Nick Belardes on Facebook. How could I not want to befriend-for-life someone who loves books, has a warped sense of humor and a heart as huge as Jupiter? Best of all, Nick's one hell of a writer. He's the author of Songs of the Glue Machines, Letters from Vegas, and he illustrated Jonathan Evison's NYT bestseller, West of Here. His journalism has appeared right on the home page of CNN, and he's contributed to The Nervous Breakdown, The Weeklings, Latino Rebels, and more. But wait, there's more! Nick also works with the indie movie studio Hectic Film, where he's acted in The Lackey, and he wrote the upcoming feature, Infernum.

A People's History of the Peculiar is a most wondrous book, full of strange facts you really need to know, all of them guaranteed to delight, shock, and just tickle you. Nick asked me to write the foreword, which was one of the most fun pieces I ever wrote, and I'm frankly honored to be associated with anything Nick writes.

Nick, you are too cool for school. Thank you for coming on my blog! 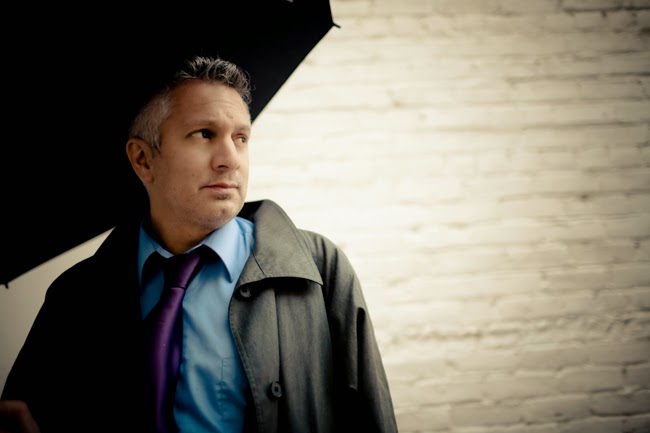 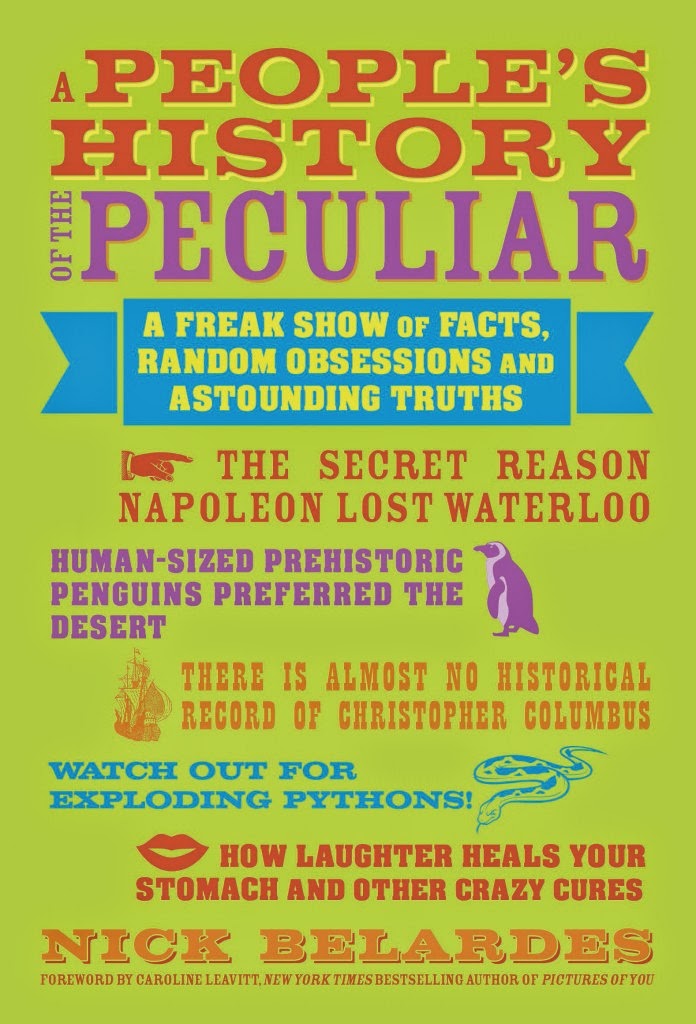 So what sparked the idea of this book?

Years ago I’d been on a writing panel with Brenda Knight, author of Women of the Beat Generation at the Yosemite Writers Conference put on by author Bonnie Hearn Hill. When Brenda went to work for Cleis Press she helped launch the mainstream imprint Viva Editions and asked me to write a quirky book. I can’t even begin to describe how interesting Brenda is. She once called me a spider shaman after I survived a black widow bite. Allen Ginsberg came to one of her readings (one of the weirdest and coolest American poets ever), and she has bizarre ties to the Mothman story (I go into detail about this in A People’s History of the Peculiar). She’s had great success with Viva Editions. Some of her clients have gone on to Oprah fame. Some are exciting word-lore lovers like Arthur Plotnik (The Elements of Expression and Better than Great: A Plenitudinous Compendium of Wollopingly Fresh Superlatives) and philosopher-writer Phil Cousineau (Wordcatcher and The Painted Word). So, how could I say no? I studied and taught history, so that’s why there’s so many weird tales from the past in the book. I think the truth of it is Brenda collects authors who hunt knowledge in strange ways and I’ve fallen victim.

What really surprised you in your research? And how did you ever stop researching with amazing facts like these?

I think what surprised me about researching A People’s History of the Peculiar was how accessible the weird really is. Strange stories from the past, weird disease, weird science—all easy to dig into in university library archives and internet news stories. I was amazed how willing people were to talk about the bizarre stories they’re connected to when I called to interview them. Scientists examining Teddy bears in space. A man who has Alice in Wonderland Disease. A guy obsessed with animation who worked on one film for four years. Really made me think how we’re all utterly connected to this strange cosmos. Look at writers. You’re weird. You searched for inter-dimensional portals as a kid. You probably have all kinds of writing habits that people might think are ripsniptiously strange (You see? Arthur Plotnik taught me that cool word). I was obsessed with books, maps and clay as a child. I mean really obsessed. I built entire clay armies and giants out of clay too and waged epic wars. Each clay soldier was armed with a toothpick sword. The giant? A butterknife! Caroline . . . I’ve never stopped researching. I can’t. There’s a man who lives though he has a flat brain. There’s a little part of a cell called a telomere that tells us how long we will live (I don’t want to know). And Mateo Ricci in the 16th century taught the Chinese how to build memory palaces. I can’t stop finding these facts so amazing.

Why do you think truth really is stranger than fiction?

There’s a story in A People’s History of the Peculiar about a man with Cotard’s Delusion. He thinks he’s dead. He wonders why the clocks are still working. Shouldn’t the ticking have stopped? What an interesting POV he would make for a novel. But would it fly? Maybe this has already been done. Maybe it’s too weird to pull off. Of course I know how weird novels get, how the worlds we build can create any kind of believability in the reader’s consciousness. But would anyone want to journey with such a narrator? Perhaps. Either way, Cotard’s Delusion is real, and so is Capgras Syndrome where people think everyone is an imposter, including their pets. Have you ever thought your turtles were imposters, Caroline?

I know the answer to this, but I want your answer--why do you think people absolutely NEED a book like this? (And need it, they do.)

Every toilet needs a book next to it (Throw away those People Magazines for some real kooky knowledge). Every date needs a spark of weird conversation, like, “Did you read about that wastewater job guy who rebuilt photos of people flushed down the toilet? Remember that nude photo of me you ripped up and flushed? Thanks a lot!”

Every project requires unique sorts of channeling of knowledge or characters. Some books I’m more excited to write the rough draft. Others I prefer the research or revision. I don’t write everyday. But when I know I need to get a project done, suddenly I’m in a trance. I’ve fallen through that portal you were searching for as a kid that you talk about in the foreword to A People’s History of the Peculiar and I’m in another dimension. I insanely write and words pour out through an invisible spigot of the imagination. I start logging my word counts. A thousand words a day. Five thousand words a day. Some days upwards of ten thousand. Ros Barber, who wrote The Marlowe Papers (a novel all in verse), once told me a great writing day for her is one hundred words. What? Can you believe that? I think for me, because I prefer fiction, it really depends on the question of have I propelled the story? Has the character done what he/she set out to do? Are they tormented enough? Does my scene have a beginning, middle and end? For A People’s History of the Peculiar it was more about, did I capture the essence of a few interesting tales of the bizarre? That book was written in two months. I was obsessed with finishing it. I had to get a certain amount of strangeness out each day. Bam. Done. Next freak show tale. I should also add that I love to write in interesting places. Homes. Universities. Coffeehouses. There’s a dark inter-dimensional time portal at Texas State University called Boka’s Livingroom where I wrote half the novel Big Spoon, Little Spoon that my agent is currently pitching. I love that place, though most writers I’ve met say they loathe the darkness.

I’m impatient. Aren’t all writers? I have yet to meet a patient one. Not a single creative writer has a lick of ability to wait for anything. When’s the band gonna start? When’s the movie gonna begin? Even while channeling characters it’s like wrestling spirits. Oh, now they’re all reading this saying, “I do! I have patience!” Liars. Every single one of us is an impatient liar. I propose that for at least the next few moments we all admit to ourselves that we are impatient to see our next love, whatever that may be—fiction, nonfiction, poetry, screenplay—turned into what we intended it to be—a finished product. A book in our hands or a film on the big screen. This obsession has me waiting impatiently as my agent pitches Big Spoon, Little Spoon, a novel about a brother and sister living on an island in a river. You see, where I’m from in Bakersfield, California, the Kern River, which is a very deadly river, passes right through town. When the water’s flowing there are islands that people live on, where cops I call Robocops (and so does the narrator) sometimes come in with knives and shred the tents of the homeless. I’m obsessed with this particular novel selling. I want the narrator, a boy named Sugarfoot, and his sister, Tender, to be able to speak to people all over the world. Can you tell yet that I’m obsessing? I was obsessing recently over a counterculture memoir set in the 1990s, but decided to shelve that again to obsess over a literary fantasy titled A Serendipitous Garden of Lies, a project currently more worthy of my time. Characters from that novel are really speaking to me and want their stories told. They are poking me in the nose as I type this. All of those characters have their own obsessions, and now it’s my job to help all of us obsess and be tortured.

The other day I was lucky enough to be a guest on Coast to Coast AM with George Noory when someone named Marty called in. Marty was clearly disturbed by our conversation of Salem witches and talking dogs and the maidservant Tituba declaring she could fly around on a stick.


Marty: I happen to be a redhead . . . And your guest was talking about the Salem Witch Trials. I always assumed redheads were witches. And I was always really concerned about that.

George: Has anyone ever called you a witch, Marty?

I suppose the question is: do I have psychic powers? And the answer is yes, an emphatic, yes.
Posted by Caroline at 5:29 PM