Read an excerpt from Jennifer Haupt's wonderful new SheBook, Will You Be My Mother? The Quest To Answer Yes 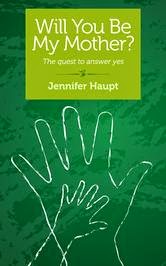 Jennifer Haupt writes poignantly about the connections and missed connections between mothers and daughters -- the love, the silence, the longing." -- Hope Edelman, author of Motherless Daughters


I'm thrilled to host the amazing Jennifer Haupt here today, with an excerpt from her new book, Will You Be My Mother? The Quest to Answer Yes.  (You can buy it here or here.) Jennifer's the author of I'll Stand By You, and her essays and articles have appeared in O, The Oprah Magazine, Readers Digest, Woman's Day, AARP: The Magazine, The Christian Science Monitor, and various other magazines.

Courage. This word has its roots in the French coeur, which means “heart.” Love. The Hebrew term for courage is ometz lev, or literally,“ strength of heart.” The heart is characterized by its continuous, unrelenting rhythm. I believe this is true of courage as well. It’s not a single moment that changes everything, but rather a series of beats in a lifetime. Opportunities. The trick is figuring out how to listen to those beats, and heed them—again and again—until fear dissipates and courage becomes as reflexive as breathing.
Will you be my mother?
This is a deceptively simple question. A multifaceted question, one that has changed—and changed me—as I’ve asked and answered in the voice of a child, a mother to my own children, and a daughter coming to terms with nurturing aging parents. A question that has guided my career as a journalist for the past twenty years.
I’ve travelled as far as Africa and Haiti to interview women who nurture wounded and abandoned children. I’ve made a successful career of writing about women who mother the children of the world, many times to heal their own pain. I ask them the questions that I want most answered about finding forgiveness and letting go of the past. The unspoken question remains: How can I recover the missing piece of my heart, the piece that I fear went missing when my sister died? I was eighteen months old, too young to remember Susie. But what stays with me is the sadness in my mother’s eyes, the tension in her touch, the distance between us still when we embrace. All of this has translated into something quite unsafe.
As my mother turns eighty this year, she is asking me to nurture her. I must let go of my unmet expectations and needs as a daughter and learn to be a mother in a new, more mature way. This is second coming of age that many empty nester women, like me, go through. It can be a time of expanding the definition of motherhood and discovering ways to nurture ourselves, our families, our communities, and sometimes even the world. And yet, I still clearly hear a small child’s voice asking, demanding. Longing.
Will you be my mother?
My SheBook started out as a single essay about a Rwandan girl who asked me to be her mother. The question was, in a way shocking. Confusing. Confronting.
Maybe it was the setting, the genocide museum in Kigali, or the fact that I missed my two sons like hell. Maybe it was that I had spent a month interviewing genocide survivors. Maybe it was that I had come here on an assignment that had dead-ended and wasn’t quite sure what I was taking home. What had started out as a magazine assignment that dead-ended became the beginning of my quest to answer this girl’s question.
The girl in the genocide museum is still with me, in a piece of my heart I had always feared went missing when my sister died and my mother disappeared into her grief. For the past eight years, I’ve tried—not always successfully—to find the courage to answer, yes.
Breath by breathe.

Jennifer Haupt contributes to a wide variety of magazines. She is also the editor of the Psychology Today blog, One True Thing, an online salon of interviews with best-selling authors and essays about the moments that matter most. Haupt's mini-memoir, "Will you be my Mother? The Question to Answer Yes," is available on Amazon and Shebooks.net. All author profits ($1/book) during May 2014 will be donated to mothers2mothers, a nonprofit that is working to stop the legacy of AIDS in Africa by creating a network of mothers with the disease mentoring pregnant women.