The amazing, funny, supersmart and super cool Rew Starr talks about her wild, innovative show Rew & Who?, being a songstress and a mom, skeletons in closets, and so much more 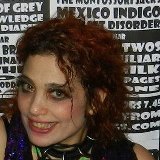 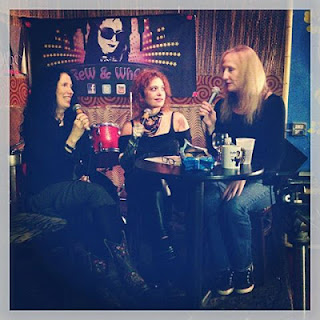 My friend, the writer and performer Polly Frost (that's her on the right!) invited me on this show filmed in the East Village called ReW & WhO? How could I resist?  Held in the back of a bar, it was both stunningly surprising, tons of fun, and Rew even had cookies. The shows are amazing and so, according to the New York Times and me,  is Rew. I'm thrilled to have her on. Thanks, Rew!

I've never been on a radio show like yours.

I think we are the only one like it!:)

How'd you come up with the idea for the radio show? Were the early days different than now?

Actually I had NO idea in the world i would be doing this. I was in a band called 'ReWBee'. with another person amed  'Bee." Bee actually asked me to be a cohost to a web show (everyone calls us a radio show but we are on the internet  and more like TV) with him. I said sure & *ReWBee's World* began. {2/18/09} after six months shooting in a storefront studio on the upper upper west side (Arizzma entertainment.) Bee decided he was ready to split, so overnight (literally) the show turned into *ReW & WhO?* (8/12/09) and that is when I decided each episode would have a different cohost ( the 'WhO'.)  I felt obligated to all the guests that were on the calendar and wanted to be able to still have them come on the show so I kept it going.  The show has morphed and transformed  and after another phase I decided to move the show downtown to 'Otto's Shrunken Head' on Joey Ramone's Birthday (5/19/10) and that is when I took full producer role as well.  I had no idea what i was in for but the show keeps going and going and now there is a one/friday/month Brooklyn edition as well at 'the Branded Saloon' which just celebrated two years! The show has taken over my life with booking, hosting and everthing else you can imagine.  Our motto comes from Marilyn Monroe's quote "Everybody is a star and deserves their right to shine".   I so agree with that, and I also want to give Warhol's promised 15 minutes to all the people with PaSSioN on this planet! My dream is to eventually go to every city and highlight  rising stars and living legends worldwide, bringing them to the globe via our web show! I have done 3 out of London and in other cities around the country and I swear I am inspired constantly by the cool people I get to meet with each show.

I especially loved the "What's the Skeleton in your closet" segment, which came with free cookies!  What's the most startling thing someone ever told you?

Ha, glad you liked that! It's funny cause I have learned that every day has a unique food holiday, so each show celebrates the 'food of the day' you got to come on National Chocolate Chip day!! I swear i don't make them up! We have had a giant array of 'skeleton' treats over the years! (guacamole day, kahluah & strawberry day, garlic day and on & on...} The segment comes from a song I have called 'skeletonz'  and yes, my life is somewhat a 'skeleton in the closet' and I think we all have ours. We have heard some crazy stories: car chases, arrests, lots of drinking and drugging.. sleeping with... it goes on.. I have to say yours was definitely in the top best 'skeletonz'.

I realized you were getting me to open up in ways I didn't in other shows--how do you do that?

You know it's funny so many people tell me that! I always think I am just chatting away, and then somehow people seem to open up like you did.  I just want the guests to have fun, feel relaxed and comfortable.  I am just being my blabby self and people seem to tell us great stuff about themselves.  I really enjoy people and chatting and seeing them talk and have a good time reliving their experiences.  Sometimes I have people say they said a bit too much and they ask to edit, especially when they think it may bring the law in somehow!  I am simply being myself. I am always on the job training and I am the queen of winging the best I can it in all situations.

What cool things should people know about you and why?

Hmmm... well I am a songstress and a Mom.  I have been dabbling in some acting this past year and I have landed some songs in some films and television. My grandmother was in Vaudeville, my Mom was on Broadway and I feel I am just following my inner path.  It took a long time to get here HA! I was always in such a hurry.. college at 16... dabbling in lots of danger... but somehow I always believed in some happy ending.  I always say I am an optimist or I live in total delusion.  My songs are from the heart always. I call myself 'PuNkTrY" cause i have a punk rock heart and tell way too much information in the words!  Everyone's favorite is "u suck' the dirty ditty that won 'Best punk song of 2011' on Pirate Radio of the treasure coast and was on 'the Bad Girl's Club' show.  Somehow, I still feel that song hasn't peaked yet and has a lot of living to do!

How can people support the show?

Th show survives on donations for now. YOU can always send a generous donation through our website .. www.rewandwho.com I still am praying for my *fairy god sponsor* to be able to actually pay my wonderful staff who show up every week, and get us around the world, all the FOOD of the day treats & THE technical expertise equipment so we can really FLY!!! {and pay the rent!!}

This show obsesses me all day every day. I am constantly finding guests, working on every week all day long.. My family can attest to that! They think I am glued to the computer always, like even right now typing all this!
I am always obsessed with that pain in the ass body image BS.  I hate that whole thing but like i said my songs usually tell all.