Disabilities activist and novelist sublime, Susan Nussbaum talks about Good Kings Bad Kings, disability culture, getting the word out, writing, and so much more 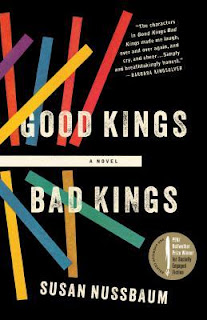 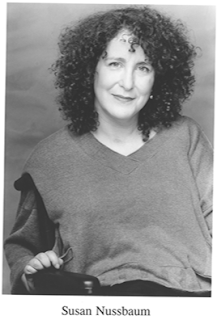 Okay, I admit I have a prejudice for Algonquin authors--and for debuts, and Susan Nussbaum's Good Kings Bad Kings is both. But this isn't just a stellar piece of work , it also won Barbara Kingsolver PEN/Bellwether Prize for fiction in 201. About the funny, heart-wrenching and inspiring lives of institutionalized juveniles with disabilities,  Good Kings Bad Kings is also about claiming your power and fighting back.

Susan is a disability rights activist who became the first publicist for Access Living in 1980. The creator of Empowered Fe Fes (slang for female), a support, sexuality, and disability identity group for girls, she's also a playwright, performer and director, whose work has been showcased at Second City, Live Bait, Steppenwolf, and more. Her play No One as Nasty appears in Beyond Victims and Villains: Contemporary Plays by Disabled Playwrights.

Susan, thank you so much for letting me pester you with questions! So happy to have you here!

I’m always interested in the origins of books. What sparked you to write Good Kings Bad Kings?

I don’t remember a spark.  It was more like a very slow logical progression.  I worked in a disability rights organization for many years and frequently received emails about abuse and neglect in various kinds of institutions for disabled kids.  Lots of emails, from all over the U.S. Sickening stuff. At some point I started printing the articles up and saving them.

Then a colleague gave me a legal journal with testimonies from parents and kids, as well as the so-called caregivers, etc.  Reading it was like opening Pandora’s Box, you know?  The words on those pages were that toxic.  There were government reports, statistics from various studies – and the studies consistently showed that even in the public school system, 90% of the most egregious violations against children in general were aimed at disabled children. Disabled kids are like magnets for frustrated sadists nationwide. I went to protests against nursing homes with bizarrely high death rates.

But I still had no notion of what I would do with all this material.  At that point I hadn’t written anything for many years.  The idea of writing another play held no appeal. I knew I should probably write a book for quite a while. Then one day, I just started.

It had to be a novel.  The disability culture movement is relatively young, maybe 25 or 30 years. I knew if I succeeded I’d be one of the first actual disabled people to write a novel. A novel where the disability experience is central to the story, that is. Obviously there’ve been some great writers with disabilities for centuries, but did they deal with disability in their work? They did not. But I would. Not only that, I wanted to write multiple disabled characters. And not the old victim or villain crap.  I wanted to write real disabled characters. That was my plan.

And can you tell us about the title?

The title comes from an article I read while doing research.  A young boy, about 8 or 10 years old, lived in an institution for developmentally disabled kids somewhere in Illinois, I think.  I don’t remember the name of the place. The boy was in the institution’s van, accompanied by two aides, one was driving.  The other aide sat in back with the boy.  The boy kept trying to stand up out of his seat.  So the aide put him face down on the back seat and sat on him. This kind of “take-down,” as they are called, is quite common, although they’re illegal in many states. And they’re supposed to be done with two people, so someone can hold the child’s ankles while the other one straddles the kid.

Anyway, the aide who was driving later testified that he saw the boy was struggling, and he heard the other aide say to the boy, “I can be a good king or I can be a bad king.” Taunting this little kid. At some point, the weight of the aide bearing down on the child made it impossible to breathe, and he died.

It became the title because it reminded me how when it comes to kids, the adults have all the power.  And when the adult in question has no emotional connection to the child, and the child’s welfare is turned over to that adult – as is the case in many institutions – terrible things can happen.  The events in my book are significantly watered down from what really happens at some places. I doubt anyone would believe me if I used anything too close to reality.

What was the writing of this particular book like? What were the major challenges? The greatest joys?

Some of the process was heavy labor and some was great.  Having never written a book I was really lost for the first year at least.  And I had a job then, so it was impossible to get into a writing rhythm, and I was tired. About a quarter of the time I’d drag myself into my office at home and fall asleep in front of my computer. Dead asleep in some horrible position. After three years, I hadn’t even finished the first draft. I finally was able to quit my job and I stayed home and sailed through the rest. About a year or more writing everyday, but I was in the zone half the time.

My main obsession is trying to find ways to get the word out about the book, because I love the whole image in my head of someone reading it.  It’s not about money at all – although that’s not a bad image either – but really, it’s that idea of someone else’s eyes reading line by line, you know, when they get a chance. In a restaurant or on the couch or taking public transit.

Here’s a little story:  My playwriting agent gave a galley copy to a friend. The friend’s daughter, at the time, was having a hard time at school, dealing with some bullying.  She was 14. So, the mother decided to take turns with her daughter reading the book aloud to each other. That killed me. That was bliss.
Posted by Caroline at 9:40 AM