Gerry Hadden talks about the unexplained, Never the Hope Itself, and more 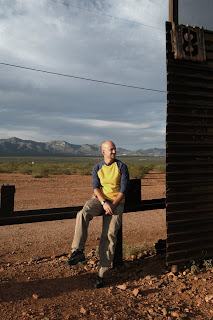 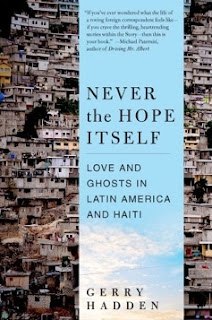 Gerry Hadden's Never the Hope Itself: Love and Ghosts in Latin American and Haiti is one remarkable book. A young radio reporter about to don monk's robe, he winds up in Mexico City and Haiti instead, dealing with ghosts (both literal and figuratively) while also falling in love. It was such a stellar book, I asked him if he'd write something for the blog. Thank you so, so much, Gerry.
Covering Mexico at the dawn of the 21st century was an extraordinary experience.  A busted open piñata of extraordinary experiences.  It began so hopefully.  The country saw its first democratic transition of power in more than seven decades.  The U.S., under President George W. Bush, was busy mapping out a “century of the Americas,” a new era of closer cooperation and respect.  Planes smashed into the Twin Towers and elsewhere.  The U.S. forgot Latin America, remembering only to lock down its southern border before shipping soldiers out to Afghanistan and Iraq.  A great debate began:  Was it a blessing or a curse to have the great eye of America suddenly focused elsewhere?  That debate continues.  There is no right answer, only points of view and arguments to defend or discredit them. That’s geopolitics. It can be maddening, but almost every decision taken or event unfolding can be explained through its prism.  You might not agree with an explanation, but it’s there, rational or not, supplying motive.
That’s normal stuff.  What made my experience in Mexico extraordinary were all the things that couldn’t be explained.
I couldn’t explain to my Italian friend, Guido, the sax playing hairdresser, why the sofa he was sleeping on in my living room kept lifting off the ground and banging down again.  I couldn’t explain the banging of dishes in the kitchen when I wasn’t in the kitchen.  Even harder to make sense of was the pair of boy’s legs that apparently scampered down the front steps one evening.  Just legs.  Wearing knickers, my friend Karina said. Or the people milling around in the big framed mirror over the piano who drove that young human rights worker from my house forever.  Or the thing that sat on me, or the self-propelled raisins, or the Bertrand Russell book, an impossible gift and yet just lying there, for me, on my computer.
All of these things were heard or seen or happened in the house I rented on Jojutla Street in Mexico City.  It was my home and the NPR bureau, and it became a crossroads of events both current and other-worldly.  What a gift.  I could exercise my rational mind each day by gnawing on the news, the culture, the history.  And then, every once in a while, I got to shut my rational self off and instead just stare in surprise, or awe, or fear, resting in the uncertainty.  That was exercise too.  The Mexicans I met had a name for the strangeness I was encountering: Ghosts. For lack of a better answer, and despite my skepticism, I accepted the term.  Provisionally.  I waited.  A better answer never came. My skepticism waned. I was living in a world that seemed to find nothing unusual about specters.  Maybe, just maybe, I thought, if an entire culture makes mental room for the supernatural, the supernatural can be born into that space.  But who knows? I never figured it out.  It was extraordinary.
Posted by Caroline at 2:25 PM