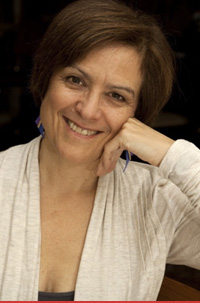 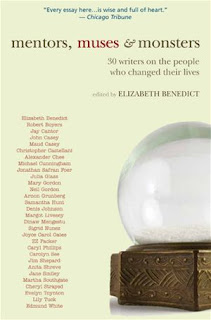 Elizabeth Benedict is an acclaimed, bestselling novelist, editor, teacher and an all together fabulous person to boot. She's the author of five novels, including Almost, and of The Joy of Writing Sex: A Guide for Fiction Writers. Her latest book, Mentors, Muses & Monsters: 30 Writers on the People Who Changed Their Lives, was just published in paperback by Excelsior. (It’s available on Kindle and Nook)  and it's racking up the raves. Chicago Tribune made it an Editor's Choice, and The Christian Science Monitor called it "mesmerizing."  What better Valentine's Day gift than this wonderful essay.
Writers’ Valentines to Their Mentors
This is not news: Writers are famously cranky, infamously jealous, hopelessly self-involved. But several years ago, I unleashed a whole lot of gratitude and love in a group of wonderful writers.
It happened like this: In 2008, hours after writing a tribute for Tin House to one of my writing mentors who had recently died, Elizabeth Hardwick, with whom I studied at Barnard, I did some on-line research and saw there was there was an important volume missing from the shelves: stories about writers and their mentors, the people who encouraged us, prodded us, gave us the crazy idea that we could become the cranky, jealous, self-involved people we’ve become. There was no such book, no such collection, and only one memoir about a mentor, Alex Wilkinson’s about William Maxwell.
Within an hour, I came up with a title I thought would encompass as many kinds of stories from fiction writers as might be out there – Mentors, Muses and Monsters . I liked the alliteration, and I liked the idea that not all the people who helped us were angels, and not all the stories should be sugar-coated. I knew a story or two about mentors who became, over time, monsters. My criteria for asking contributors: they had to have published at least one work of fiction, and had to know a thing or three about writing essays. Cheryl Strayed’s two astonishing essays in Best American Essays convinced me to ask her. (And what a good idea that turned out to be! She earned a Pushcart Prize and a Notable Mention in the Best American Essays 2010, for her essay on Alice Munro.)
Within weeks of issuing invites, I had several dozen writers who wanted to tell a story. But the categories didn’t break down as I had anticipated. Many had stories of people to tell. Others had books and unmet writers to thank. And several had experiences, jobs, periods in their lives that made the difference.
Jonathan Safran Foer wanted to acknowledge Israeli poet Yehuda Amichai. Sigrid Nunez wanted to remember Susan Sontag, with whom she lived in her twenties while dating Sontag’s son. Jay Cantor had studied with Bernard Malamud. Jane Smiley was eager to thank her Iowa Writers’ Workshop classmates, among them, Allan Gurganus. John Casey had Peter Taylor, who told him while he was a Harvard law student, that he should forget lawyering and become a writer – much to the chagrin of Casey’s parents.
Months later, with a deadline and a contract from Free Press/Simon & Schuster, the essays began to appear in my computer, and I still remember how dazzled I was to read so many of them. I knew the pieces would be good, but had no idea how good they would be – and how seriously each writer would take this assignment. As the pile grew larger and richer – Michael Cunningham on Virginia Woolf, Joyce Carol Oates on Alice’s Adventures in Wonderland, Lily Tuck on Gordon Lish, Dinaw Mengestu on running an after-school program in Harlem, Carolyn See on her pornographer father – I realized that these essays fell into a category of their own.
The gratitude each writer wanted to convey, the recollection of life before and after the mentor’s influence, the unique value of a person or a moment that altered the course of our lives, that gave us purpose and a particular kind of nerve – all of this intensity asked something special of the writers. The meaning and complexity of these people and events asked the writers to devote their best story-telling selves to the task. Each seemed determined to write a piece as powerful as the experience itself.
Each is a love letter, even those that end with a sprinkle of hard feelings. And I’m honored to have brought this book and these wonderful essays – these complicated Valentine’s to teachers, writers, to books themselves – into being.
Posted by Caroline at 2:03 PM

Speaking of gratitude, thank you, Caroline, for giving me this prime real estate in which to talk about MENTORS, MUSES & MONSTERS, which just came out in paperback!

This book sounds so wonderful and powerful -- what better way for a writer to pay homage to someone who has helped guide, teach, and mentor (even if some are sprinkled with hard feelings)? I definitely will be checking this out!

Sounds like an inspirational read, and quite an exciting lineup of authors. A story to add -- I went to a lecture yesterday by Elliot Engel, in honor of Dickens' 200th birthday, and most of the talk was about a drunken maid who was Dickens' mentor, monster, and muse. She told him the same melodramatic horror tale every night from the time he was three until he was five, and by the time she left the family he had a firm grasp on how to grab an audience and keep them enthralled...

I've read the book, and it is BOTH very smart and very inspiring. Great stories of good writers finding their own direction.

Thanks for passing on the Dickens' story! And thanks to others, including ARCHDUKE, for your kind words.

Good information. Lucky me I found your site by chance (stumbleupon).
I've book-marked it for later!