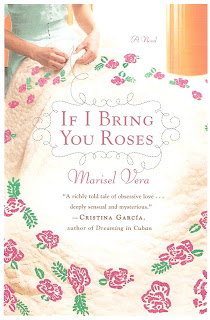 Marisel Vera's novel is a bittersweet love story, set in the 1950s and a haunting chronicle of Puerto Rican immigrants in Chicago. I loved the novel so much, I wanted to bring Marisel on my blog, and she graciously agreed to write something. Thank you so, so much, Marisel.
I Am A Puerto Rican Writer—Read: American Writer
As the oldest daughter in a traditional Puerto Rican family, one of my chores was to iron my older brother’s clothes.  I did the worst job I could short of burning them, hoping my brother would tell my mother he would iron them instead (That never happened.).
I snuck MS magazine into the apartment and stayed up late into the night sitting on the toilet and reading it in our only bathroom. I plotted to run away from home and show up on Gloria Steinem’s doorstep and ask her to adopt me. I didn’t do that, but I fought my own personal struggle of being a feminist in a culture where girls are raised to be subservient, first to their fathers and brothers, and later to their husbands.
When I went to college, I did my best to hide that I was a Puerto Rican from Humboldt Park, a Chicago neighborhood where riots had recently shocked its citizens and the entire city. It put me on the defensive even when fellow students asked me ordinary questions.  “Where are you from?” made me cringe. How to answer without bringing to mind the image of burning cars or that of a mother and small children leaving a demolished store with stolen goods in the middle of the night? Some people, especially adults, reevaluated their first impressions of me but, to my surprise, most people seemed unaware of the riots.  At first, I was relieved.  But then I was appalled that a number of Puerto Ricans from Humboldt Park had felt so oppressed and disenchanted that they had resorted to rioting and their suburban neighbors hadn’t even noticed.  This confirmed what the women’s movement had already made clear to me, I lived in one world and everyone else lived in another.
My cultural and family upbringing was part of me and while I embraced it, I didn’t have a solid foundation of what being Puerto Rican meant because my parents were taught American history in school in Puerto Rico. Without that foundation, I couldn’t help feeling inferior when people questioned my right to American citizenship or when I read or heard negative stories about Puerto Ricans.
My extensive research about Puerto Rico and its history has also deepened my pride in my ancestry.  Although by this time in my life I know who I am, it took my research for If I Bring You Roses for me to learn about the events that resulted in Puerto Ricans migrating to Chicago.  A little knowledge of Puerto Rican history growing up would have given me some ammunition when kids taunted me to get back on the banana boat. Yet If I Bring You Roses is an American novel (as I am American) about Puerto Ricans (as I am Puerto Rican) who migrated to 1950s Chicago. It’s a story about a marriage, about love and heartbreak, about immigration, about assimilation, about Puerto Rico. If I Bring You Roses is about America.
Posted by Caroline at 9:06 AM