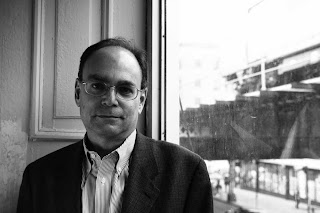 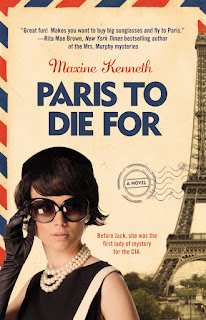 Ken Salikof is a sharp, funny writer, and a friend. Paris To Die For, written under a pen name, is just as sharp and funny, too. 'm honored to have him on the blog today!  Thank you, Ken!
Some books are like time machines.  Want to know what it felt like to live in New York in 1882?  Read Jack Finney’s classic Time and Again (1970), which is, coincidentally, about time travel.  Want to experience the horrors and heroics of the Indian Sepoy Mutiny of 1857?  Read J.G. Farrell’s Booker Prize-winning The Siege of Kirshnapur  (1973).
I tried to join the august company of these writers when I found out about a letter written in 1951 by a 22-year-old Jacqueline Lee Bouvier, in which she reveals the possibility of going to work for the CIA.  My imagination immediately captivated, I instantly conjured a novel in which Jackie, as a neophyte agent for the CIA, would have an espionage adventure in Paris, her favorite city, in 1951.  The task at hand became researching Paris in that year and recreating it for the reader to achieve that all-important time machine effect.
Each day, at my computer, the first thing I would do was play Henry Mancini’s propulsive theme from the movie Charade, whose Hitchcockian blend of romance and suspense was my tonal inspiration.  Then, having done my research and viewed as many period photographs and artifacts as I could find, I let my mind transport me to post-World War II Paris.  I certainly gave my imagination a workout.  I have never stood atop the belltowers of Notre Dame Cathedral, and yet I was describing what a fleeing Jackie would see and feel from this vertiginous vantage point.  I have never been in a dangerous Vespa chase through the streets of Paris, but here I was dramatizing how Jackie would experience just such a pursuit.
In a way, this was an easy period to write about.  Christian Dior had just created his signature “New Look.”  Marcel Marceau was first making a name for himself as a mime.  And I peopled my narrative with cameos by once and future personalities who either were or could have been in Paris at the time.  It was such a rewarding experience to have these real life characters interact with my fictional recreation of young Jackie Bouvier.
I also created three mini-narratives that flashbacked to the German Occupation, still so fresh in the minds of French citizens.  One was a deliberate homage to Alan Furst, who has made this unique sub-genre his own; another was inspired by photographs in Serge Klarsfeld’s landmark reference work, French Children of the Holocaust; while a third allowed me to recreate the joy of Paris’ Liberation Day, August 25 1944.
Now I am not making a case that I am in the same league as any of the writers mentioned above, but I loved the experience of writing Paris to Die For because it allowed me to resurrect a place and a time that exists no more.  As Woody Allen shows in Midnight in Paris, it is ultimately unprofitable to live in the past.  But it is a hell of a lot of fun to write about and--hopefully--read about.
Posted by Caroline at 6:24 AM

I just finished reading this book and I so enjoyed it. I really felt that I was in 1950's Paris. My father was in the Army during World War II and I often look at the pictures that he took while he was there.