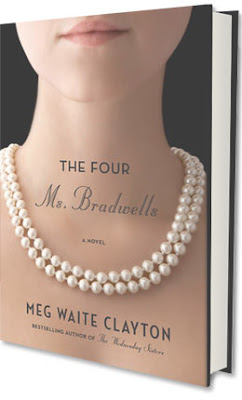 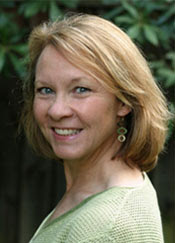 Bestselling author Meg Waite Clayton is not only the creator of a fascinating and riveting new novel, she's also one of the most generous writers on the planet. I was thrilled to read her new novel and even more honored that she's here on my blog to answer my pesty questions.

Both the Wednesday Sisters and The Four Ms. Bradwells deal with the bonds women form with one another, but this new novel also has this riveting line of tension throughout because of the secrets they've kept from one another. Did you have everything mapped out before you started writing or did it come as a surprise to discover you were writing a mystery? Tell us about your writing process.

The dreaded writing process… People often think of writing in terms of “inspiration,” but for me it’s more like going on a mad hunt in the hopes of uncovering something that I can beat on until it makes some small yelp that might turn into words on the page. I read and research endlessly in the never-ending quest for material to shape into story.

My invariable answer to the question of how an aspiring writer should start is Any way you can. That’s the way I start myself. I tend to start writing in my journal on the pretense that it’s nothing, then move to a computer when I have some kind of start.

I don’t often step back and outline or figure out where the story is going until I have something that feels like a decent beginning, because that step toward shaping the novel and finding the ending is often when the whole mess starts to feel like it’s splattering me. If that happens before I’m committed to the story, it ends up in the recycle bin.

I do outline, though, and make character scrap books, too. I use note cards. Lots of note cards. And I do try to find the ending before I get too far along. I can spend a long lot of wasted time writing to a dead end if I don’t map things out.

There is the quote, "what would happen if one woman told the truth about her life?" Do you think women more and more are doing this? Do you think societal pressures keep that from happening more?

There was a lovely piece in the New York Times this morning – in the business section – titled “Keeping Women Safe through Social Networking,” about two online sites where women can report and share stories about harassment they’ve experienced. It’s such a small thing in a way, but I remember as a twelve-year-old – twelve! – having men make comments about my breasts as if my body were public property that everyone had a right to scrutinize. To this day, I’m self-conscious about my body.

As I read the piece, I thought, yes, that will get our stories out there, we’ll feel less alone, but then what?Then I thought of Anita Hill stepping up to challenge Clarence Thomas about sexual harassment. It wasn’t a word we even knew, really. It was just what we put up with to survive as women in a man’s world. We talked among ourselves, gave advice about who to avoid being alone with in elevators and the like, but we didn’t make fusses for fear of what it would do to our careers. When Anita Hill went public I at least was horrified she was destroying hers. Instead, though, her speaking out started a dialogue that resulted in laws to prohibit behavior we all knew was wrong but thought we had to endure.

The end of the quote – from “Käthe Kollwitz,” by Muriel Rukeyser – is “the world would split open.” I think that is what’s happening if you look back over the stretch of the history of the last 150 years or so. But it sure is taking its time. And I do think that slowness is largely due to societal pressures on women.

I love it that you wrote about such four accomplished women and that wonderful line, "Change starts with us," which I wish could be an anthem for every young woman on the planet. All of them grapple with the past and make an important decision about it. So, do you think that the meaning of the past changes when it is brought into the present? Or perhaps it's simply we who change in the way we look at it?

Was it Winston Churchill who said history is written by the victors?

I think the answer to your question, Caroline, is a little of both. We certainly look at, say, Elizabeth Cady Stanton’s speech at the first convention on women’s rights these days as the beginning of the fight for a women’s right to vote, which we no longer question but rather applaud. But at the time it was called “the most shocking and unnatural event ever recorded in the history of womanity.”

One of the things I think is changing the way we see things – the change in the role of women – is that more women are writing the history. Does that mean we’re winning the battle? Maybe.

Publishing careers are often a surprise to us writers. Your first novel was a finalist for the Bellwether prize, but it wasn't until your second novel, The Wednesday Sisters, that you really broke out and fame found you. What was that like and how did your writing life change because of it?

“Fame found me” – I like the sound of that! If so, it’s a very modest fame. Let’s just say I’m rarely stopped in the grocery store for my autograph. I was wondering the other day if there was a level of fame at which one could no longer go to the grocery store oneself. And wishing for it!

Honestly, though, the success of The Wednesday Sisters has been glorious. When I started writing the novel, I was despairing of ever getting a second novel published because The Language of Light was selling so “modestly.” I decided if nobody else was going to read what I wrote, anyway, I may as well write exactly what I wanted to read. Having the result be so enthusiastically embraced by readers has allowed me the psychological freedom to write without worrying quite so much about who will read my writing and whether they will like it.

Well … except for my friends at Ballantine. That is another very nice thing that has happened: I now have Ballantine on board to publish before I start writing a novel. That kind of support from a publisher is an amazing boon.

But the biggest change has been all the direct contact I have with readers, and how delightful that has been. It requires time: answering emails, social networking, and visiting book groups in person, by phone, or on skype or googlechat. I also get asked to do charity fundraisers quite a bit, often for causes to benefit girls and women and/or literacy; I accept whenever I can as my small way of chipping in to making this world a better place. It’s an amazing treat to get to connect in person with readers. That has been the biggest surprise for me, how much readers reach out to me, and how delightful interacting with them is.

What's up next for you?

I’m working on a sequel of sorts to The Wednesday Sisters. No doubt there is a line in some earlier interview in which I state unequivocally “never,” but I got so many request from Wednesday Sisters readers for one that I started noodling the idea. I found I was quite interested in following some of their daughters, specifically Kath’s oldest Anna-Page, Ally’s Hope, and one of Linda’s twins. The novel focuses on the daughters, but their stories can’t be told without reference to their mothers.

You should ask me what my main writing fuel is. That would be chocolate. I’m partial to Sharfenberger extra dark.

Or what I’m wearing on book tour? Pearls! (In honor of the gorgeous Four Ms. Bradwells cover.) Also a stunning silk scarf by designer Camilla Olson, who also designed a suit Ginger wears in chapter one of The Four Ms. Bradwells.

Whether I lived in the same room at the University of Michigan law school as the Ms. Bradwells did? I lived in N-32 – the smaller one that Betts and Mia live in. My law school boyfriend lived in one of the suites like the one Ginger and Laney share.

Or who designed my amazing website. The answer is Ilsa Brink, and you can see what an artist she is at www.megwaiteclayton.com.