Laurie Hertzel talks about News to Me: Adventures of an Accidental Journalist 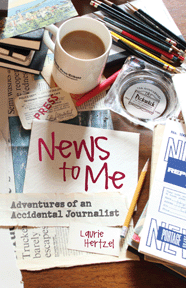 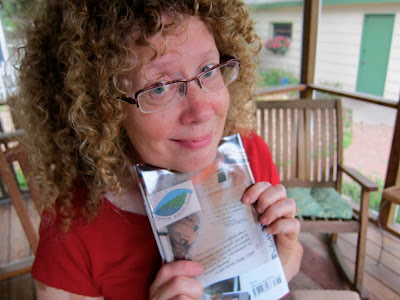 Laurie Hertzel fell into journalism after taking a job as a clerk at the Duluth News-Tribune and is now is the books editor at the Star Tribune in Minneapolis. She's been a fellow at Duke University, a writer-in-residence at the James Thurber House in Columbus, Ohio, and a faculty member and speaker at the Nieman Conferences on Narrative Writing and Editing at Harvard. Oh, and let's not forget that she has spectacularly great hair, a hilariously dry and warm wit, and she's written an absolutely wonderful book about finding success in the newspaper world despite herself. I'm tickled and honored to have her here. Thanks, thanks, thanks, Laurie.

You write that everything you did happened by accident, but wouldn’t you also say that your passion and drive opened doors?


You call it passion and drive, I call it single-mindedness. I have always had very limited skills—I am no good at math, I can’t carry a tune, I’m not handy or crafty, all I can do is write. So instead of trying to learn how to do those other things, I put all my focus into trying to improve as a writer.

When opportunities came along—the Duke fellowship, the Russia trip, and there were others—I focused on getting them with a sort of laser-like intensity because I knew it was do those things, or do nothing. And I have never been very good at doing nothing.

I also think that not finishing college was, in some ways, good for me—it made me feel, constantly, like everybody else knew things I didn’t. And so I tried very hard to learn, and I sought out opportunities like fellowships and conferences, trying to get up to speed.

I love the story of how you called your first interview with a quavering voice because you were so shy, yet despite this timidity, you still got out in the world, and subsequently wrote a terrifically intimate book. How does a shy person balance that need to be in the thick of things to get the story with the desire to hide in a room?

You might be surprised to learn that a lot of newspaper reporters are actually fairly shy people. In my experience, there are two kinds of reporters—the brash, gregarious, hard-charging kind, who get a certain kind of story, and the quieter, more observant kind, who get an entirely different kind of story.

Your love for Duluth is palpable. Do you ever get back? Do you miss it? Do you think geography defines us?


Well, that’s an interesting question, about geography. Do I love smallish towns and rugged seasons and nature at my doorstep because that’s the kind of place I grew up in? Or was I just lucky to be born in a place that fit me? Certainly there were plenty of people—some of my siblings among them—who couldn’t wait to get out of that town and move on to bigger cities or more temperate climates, but clearly I wasn’t one of them.

When I moved to the Twin Cities, I knew that I could not settle permanently on an urban street surrounded by houses and pavement. And so we were lucky, after a year or so, to buy a house right on a park. That park is a crucial part of my life; I walk the dogs through it every morning, ride my bike along its paths, stare out the window at the trees and the lake. It has hawks and eagles and groundhogs and otters and, sometimes, an occasional fox. I need that constant reminder that we are all part of nature, that all that is urban once was wild.

I do get to Duluth once or twice a year—Doug and I pass through on our way up the North Shore a couple of times a year, and we go to Duluth now and again to visit friends. I miss the city because it was so familiar to me, and I knew it so well, but I’m not sure that I still know it. It has changed a lot since I left. And I don’t know if I could live there again.

What fascinated me was that while you were a journalist, you felt driven to write fiction, and did so successfully, winning fellowships, and yet you gave it up to be back in the thick of a newsroom. Do you ever miss it or feel the pull of it calling you back?


I don’t think I have enough of an imagination to write good fiction. I am pretty grounded in fact and reality, and I am literal-minded to a fault.

It’s true that I wrote a couple of short stories, but they were all based at least somewhat on things that had happened to me, and they were all of a type: first-person, focusing on small events that held larger significance.

I think one reason I was drawn to fiction was that it allowed me to write in a more intimate way than traditional daily journalism allowed. With fiction writing, I paid attention to certain mechanics—pacing, symbolism, openings, closings, dialogue, scene, summary—and then tried to translate what I had learned to reportage.

Do I miss writing fiction? For all that I think I’m no good at it, I do miss it, sometimes. I miss seeing the world the way I did when I wrote short stories.

I found the stories of how the old newsroom changed (women infiltrating all men offices, clattering typewriters changing to computers) hopeful in the light of the metamorphosis they are going through today. Are you optimistic about the future of newspapers and where do you think they’re headed?

I have to be optimistic. I am optimistic. My newsroom and newspaper seem to have stabilized. My husband’s newspaper (he works for our competition) has shrunk considerably over the last ten years, but it, too, seems stable now, in its new reduced size. And I do not think a democracy can thrive without a free and inexpensive and widely distributed press.

I am no good at predicting the future. But I think print journalism will stick around for a long time because a lot of people still like paper. And Web journalism, without a doubt, will continue to grow.

I miss those old days, though. They were fun.


Reading your book, I got the feeling that you’re going to do something surprising next—that you’re always somehow evolving. If newspapers were to end today, what would that be for you?

I love this question and it is the one that has kept me from dashing off these answers quickly and getting them back to you immediately. I am stuck on this one. Sometimes I think I could do anything—go back to school and study earth science! Work for a nonprofit! Go into retail! But in truth I have no idea. You can be sure of this, though: whatever happens will absolutely be by accident.

I LOVED finding in our book that you say at an interview you should always ask what question you should have asked but didn’t—I’ve been asking that for all my blog interviews since I started them. So…what question should I be mortified that I didn’t ask you?

But I think you asked great, and enough, questions on your own.
Posted by Caroline at 8:11 AM

thank you for this, Caroline! I will answer your questions any time.

Thank you Caroline for a brief glimpse into the evolving story of Laurie.

I have followed her blog for a short time now and am anxious to read her book. Thank you for asking just the right questions.

Thanks for this, Caroline and Laurie. As a sometime/former journalist, I'll have to follow your blog, Laurie - and I'm heartened by your optimism! (I'm secretly optimistic about journalism, too, but too often feel like I'm just being naive.)

What a great interview! I like how it supplements my reading of Laurie's book--and answers MY burning question about where she's at with writing fiction.

Interesting questions - and especially the last one. Give her a taste of her own medicine!

I have been following Laurie for a long time and enjoy everything she writes!

As a devoted Laurie fan, I look forward to seeing what her next enthusiasm will be.

Thanks for this great interview.