Read This Book: The Hand That First Held Mine by Maggie O'Farrell 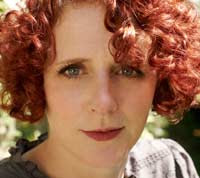 For me, there are certain books that you feel compelled to reread every year. After You'd Gone by Maggie O'Farrell was one of those books that I carried around with me because I couldn't stop reading it. She has an astonishing new book out, The Hand That First Held Mine, and already it's getting dog-eared. Tracking two different London women, fifty years apart, the novel meditates on memory, art, longing, motherhood--and loss. I was thrilled that Maggie offered to answer some questions. Thank you so much, Maggie.

In many of your novels, you veer from the past to the present, with multiple perspectives. Do you believe we can ever escape our pasts—or recover from our secrets?

It’s not so much that we can’t escape our pasts – we are our pasts. We’re made up of every experience we’ve ever had. I think life adds layers to us, like different strata in rock. Everything is embedded in there, visible or not.

I was about a quarter sure that I knew what was going to happen in this novel, and then was thunderstruck when I got to the truth. Did you know this was going to happen before you wrote the novel or did it just come to you? And are you one of those writers who do like to know?

The central mystery of the story was clear to me from the book’s inception: everything else had to be fitted in around. I don’t generally plan my novels to every last detail before I start; I know writers who do but I prefer to work things out along the way, with just a few ideas in place before I begin. The challenge for me is to link these ideas together. One of the things I like best about writing is when you think the book is going in one direction but then it takes off somewhere else. It keeps you on your toes when your characters assume a life of their own; it’s also a sign that you’re doing something right. So I started with the idea of two women living fifty years apart in the same city but everything else evolved along the way.

The novel talks a lot about what it means to balance being an artist, a lover and a mother, which felt as difficult to modern day Elina as it does to Lexie in the past. Do you think it’s possible to have it all, or do you think something always has to be given up in the process? You’ve also held a variety of jobs starting out, from chambermaid to cycle courier. Did any of your own early struggles find their way into the novel?

I’m never really sure what that phrase “have it all” means. I’m uneasy with it, for some reason, probably because I suspect there’s something deeply misogynistic buried in it: you never hear it used for men, do you? It’s usually applied to women who have dared to have a career and children. The cheek of it. It is possible, of course, to work and to be a mother. But that’s not to say it’s easy. It’s a struggle and a constant act of planning, juggling and compromise. You have to decide what’s important – what to keep, if you like – and what to lose (in my case, a tidy house, orderly laundry cupboards, organised accounts have been sacrificed, not entirely reluctantly). Elina and Lexie aren’t me, in any sense, but of course there are elements of my experiences in them. Like me, Lexie arrives in London from a rural background to become a journalist. And the scenes with Elina and her tiny baby are drawn from my time with my newborn son.

I was fascinated that the book was also about how and why and whom we love and the choices we make because of that emotion, from the shock of love for a newborn to Lexie’s devotion to Innes Kent who helps transform her. In many of your novels, love goes hand in hand with secrets. Do you think love can ever be easy, or is it just the nature of love to be elusive and complicated?

Human beings are very complex creatures so any form of interaction between them is going to be fraught with uncertainties and ambiguities. Loving another person is easy and also alchemically strange. But I would say that the relationship between Lexie and Innes is remarkably uncomplicated: she loves him, he loves her. Yes, there are complications, as in every relationship, but if that bedrock is there nothing much can threaten it. The difficult bit is finding someone you love who loves you back. If that’s in place, everything else can always pretty much fall in step, don’t you think?

Elina and Lexie live in the same London, but fifty years apart—which makes it a different London—there’s that sense of dislocation like when you wake up and it takes you a while to recognize your room. I loved that you mentioned that these two women hear each other’s echoes over time. Do you believe that such echoes are possible or was this a (brilliant) literary device?

I think such echoes are always possible. Ten years or so we bought a house that needed a great deal of renovation. It was over a hundred years old and we knew from the deeds of the house that we were its sixth owners. At one point, a wall separating two bedrooms caved in and it was possible to see five layers of wallpaper, like skins of a onion. There was the original Edwardian wallpaper, right next to the plaster, a heavy gold-and-red pattern, and five others had been laid over it, at one time or another. So although I knew nothing about the house’s five previous owners, apart from their names, I now knew their tastes in wallpaper. And that they had stood once in this room, as I was doing, deciding what colour to decorate it and would it suit gold or green or blue or lilac?