Ann Hood talks about her new novel, The Red Thread 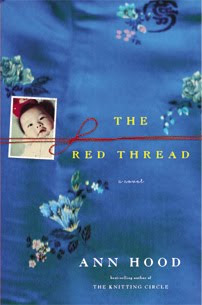 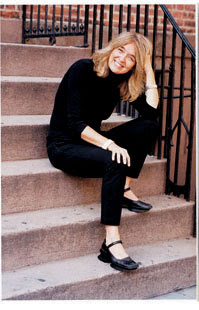 I first heard of Ann Hood years ago, back when I picked up her extraordinary debut, Somewhere Off the Coast of Maine. I was enthralled and began following her career obsessively, to the extent that though we've never met, I feel, because her work is so bold and brave, (Read Comfort for its blazingly honest exploration of loss), that I feel that I do.

Ann's new novel, The Red Thread is a gorgeous story based on her own experiences adopting a baby girl from China following the death of her daughter Grace. I asked Ann if she'd write something for my blog, and she graciously agreed. Many, many thanks Ann, for both another book for me to love, and for your piece below.

Every Mother’s Day for the past five years, I pause to think about a woman I have never met. A woman who, in fact, I will never meet. In 2004, halfway around the world, that woman gave birth to my daughter Annabelle. Because of the strict one child policy in China at that time, women were abandoning their baby daughters in parks and marketplaces, on the doorsteps of police stations and orphanages, in the hopes that the baby would be found and taken care of. In Hunan Province, where Annabelle was born, women could have second babies if their first one was a girl. However if that second—or third or fourth—was also a girl, she would likely be abandoned to allow for another try at a son.
On the morning of September 6, 2004, Mrs. Li, the director of a small orphanage in the industrial city of Loudi, arrived at work and found a baby girl in a box at the door. Most of the abandoned babies were only a few days old, usually with the umbilical cord stump still attached. This baby was different. Dressed in blue pants and blue and white flowered socks, she appeared to be five or six months old. Between 2003 and 2004, over 500 baby girls were adopted from this one orphanage alone. Mrs. Li was finding babies at the rate of five or ten a week. Like she did with all of them, she took this baby inside where the doctor examined her. She was given a crib to share with another baby who had been found a few days earlier. She was given a name: Lou Fu Jing. Six months later, that baby girl would become my daughter Annabelle.
It is illegal to abandon babies in China. Yet mothers who give birth to daughters do it every day. For fear of being caught, they leave no clues, no records, no letters or information with the babies. Therefore, the first five months of Annabelle’s life will forever remain a mystery to us. Ever since we brought her home, I have found myself imagining the woman who gave birth to her, kept her for five months, then one morning dressed her in blue pants and white socks with blue flowers, placed her in a box, and left her on that orphanage doorstep. Had she tried to hide her and got caught? Was Annabelle a second daughter abandoned when her mother got pregnant again, hoping for a son? Or did her mother die and her father was unable to keep her? Or? Or? Or? I imagine so many histories for my daughter, spinning tales to complete her life story.
When I began to write my novel, The Red Thread, I wanted to tell the stories of the women in China who are forced to abandon their baby girls. Since those women do not speak of what they’ve done, I had only my imagination to create their lives. By inventing their stories, I felt closer to that stranger who gave me the gift of her daughter. This Mother’s Day—my fifth as Annabelle’s mother—I will pause in my day. I will close my eyes and imagine that city. The air there is polluted and gray from the steel mill that dominates its landscape. I will imagine that woman, moving through the crowded streets.
Perhaps she holds her son or daughter’s hand. Perhaps she is thinking of what to make for dinner that night. Perhaps she has a husband who will touch her cheek lovingly, a baby who will lift her arms for her to hold it. Perhaps my gratitude will reach across continents and oceans and land in her heart. In her busy day, perhaps she too will pause, and know the daughter she had to leave, is safe and healthy and loved.
Posted by Caroline at 2:02 PM

What a beautiful, tender story. Thanks for sharing Ann and Caroline.

Anne Lamott and Ann Hood in the same week? I'm swooning, Caroline. Positively absolutely swooning! Two of my all time favorite writers that have each meant so much to my own career. Words escape me.

Caroline, sweetness, thank you so much for this. I don't know if I've told you (though I wrote about it at the time) but Anne's lovely book Comfort is one of the few books about grieving the loss of a child that I've read without throwing across the room.

Ann, I am looking forward to reading your latest. Your words have brought me moments of solace and I appreciate the gift.

Hi Debi, dearest friend, I'm so glad. And I send you love and hugs and more love.

Ooo, I just went to a bookstore this morning to pick this up after a friend told me about it, and it's not in yet. Can't wait to read it, especially since I loved Ann's writing in Comfort and my hubs and I are in the midst of an international adoption. Thanks for this post Caroline and Ann!

Drop in on us contemporary to
buy more facts and facts
at all events Come to see us now to obtain more information and facts at all events [url=http://lowiectwo.dogory.pl]Łowiectwo[/url]

Hello. Facebook takes a [url=http://www.onlineslots.gd]craps online[/url] lash on 888 casino furnish: Facebook is expanding its efforts to launch real-money gaming to millions of British users after announcing a train with the online gambling associates 888 Holdings.And Bye.