In which the Paper Rats interview each other! 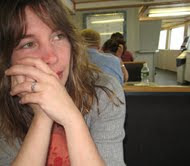 Everyone knows how much I adore the Paper Rats. Their Inside the Writers Studio videos are hilarious (and they have great swag you can buy, so it's technically not really swag, but you'll want it anyway). I offered them space on my blog to talk about their books, and being the Paper Rats, they decided they wanted to interview each other (and who am I not to let them?)
Kristen Tsetsi's Homefront was inspired by the year she spent waiting for her husband to survive his tour in Iraq. Surreal, humorous and raw, it allows readers unfiltered access to the often unimaginably frustrating experience of waiting through a deployment. (She also has a hilarious blog. )
If readers were going to make up a drinking game for Homefront, what would signal them to take a shot?

When Jake leaves for Iraq, Mia is going through a deployment for the first time. She's not quite sure how to handle the sensation of mourning someone who's still alive. It's truly confusing - it has the effect of warping the world around you (or, rather, your perception of the world). Her way of dealing with it is to drink a little (a lot). A game could probably center around that, or around the number of times she turns on the TV to watch the news and has choice words for the embedded journalists' overly dramatic war updates and news bites.
What is a common misconception a reader comes away with after reading the synopsis for Homefront?

a) That it will read like "my story and my story only" non-fiction they won't relate to - that it's written strictly for the military spouse, or that it's somehow something that can only be appreciated by a military spouse, or b) that it's well-suited for a daytime women's program when it's much more suited to be, say, the sister to HBO's "Generation Kill" - what's happening at home while those zany "Generation Kill" guys are at war. The varied cast of characters allows for some pretty honest and gritty exploration of the different ways people react to circumstances beyond their control.
After "The End," how do things work out for poor, ignored Chancey?

Oh, Chancey! Yes, sadly, he was a bit neglected, but I think Mia "finds" her cat again and builds a lovely relationship with him.
Who is your least favorite character - excluding Jake's mother - and why?

Curses! She would have been my pick.

Because I cannot choose Olivia, I'll choose Dick's Fiance. I don't like that she introduces herself to people as "Dick's Fiance," and her uber-dependent personality in general is one I wouldn't get along with very well. Such an impression she makes, and she only lasts a page...
Who would you hand-pick to play Vietnam veteran Donny Donaldson if you were a casting director?

Easy: Terry Kiser. Terry Kiser IS Donny Donaldson. Picture him in "A Weekend at Bernies," but instead of being dead, he's drunk, cranky, and inexplicably charming.

What would Mia have wanted someone to put in a care package for her?

A book called "How to Avoid Your Morbid and Meddling Quasi Mother in-Law."
Have you ever known an Olivia?

Everyone, at one time or another, in one way or another, has known - and tried to avoid - an Olivia.

R. J. Keller's (check out her blog) Waiting for Spring offers angst, sex, humor, love, and redemption, set against the backdrop of a rural Maine town struggling with poverty and loss.
If a reader were going to be

distracted by something in WFS, what would it be?
Sex. Language. And also sex.

What is a common misconception a reader comes away with after reading the synopsis for WFS?
That it's a romance novel. There's definitely a love story going on, but it's really the story of a woman's journey toward self-acceptance and self-worth.
I heard something somewhere about you being on a NyQuil buzz while writing a chapter of your book. Which part? I must know.
It was chapter 21, where Tess and Brian get stoned "underneath the mischievous stars." I was sick with a rather hideous cold and took much more than the manufacturer's recommended dose of Cherry Nyquil, then lay down on the couch to try to get some sleep (because my sniffling, sneezing, and coughing was keeping my husband awake). As I drifted off, I looked out of the window at the cold, wintry sky and, under the combined influence of Nyquil and watery eyes, noticed that the stars started to blur together, then turn colors. I knew it was something Tess would dig, so I very wisely hopped up off the couch and wrote what I'd seen and felt. Later on, I wrote the rest of the scene around it.
Who is your least favorite character - excluding the mother - and why?
Definitely Tim. Drug-dealing, murdering, control freak rapists are not good people.
Compare your book to a movie character from a popular movie. Nothing obscure.
Clementine from Eternal Sunshine of the Spotless Mind. (Or is that obscure?)
Speaking of movies, who would you hand-pick to play Tess if you were a casting director?
Kate Winslet. She'd be totally believable as quirky, intelligent, damaged, sexy, caring, sharp-tongued Tess Dyer.
Which character are you most like?
A cross between Tess and her equally forthright, but much more level-headed, sister-in-law, Kim.
Posted by Caroline at 5:11 PM