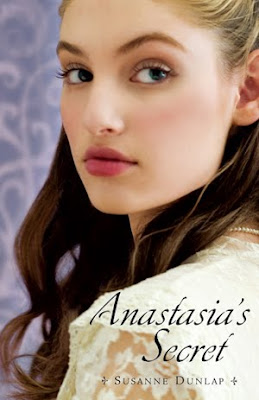 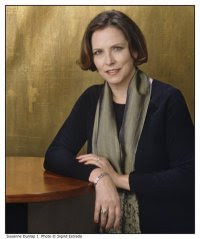 Who doesn't love the story of Anastasia? Susanne Dunlap, the author of Anastasia's Secret (which has its own blog, by the way) is a fabulous adult novelist, but she's used her alchemy to transform an enduring story into a Young Adult novel. I asked her if she'd write a guest blog for me about that, and she very graciously agreed. Thank you, Susanne.

When I read a really good book, something strange happens to me. I am no longer the 50-something adult who has been through a rather hard and hectic life, but I become a thirteen (or fourteen, or fifteen)-year-old, curled up in the big wing chair in our family living room, terrifying myself with Bram Stoker’s Dracula, or weeping over T.H. White’s The Once and Future King. Some books take me to my childhood room, where I’d stay in bed until noon or later on Saturday morning, not sleeping, but reading James Michener, or Mary Stewart, or Alistair MacLean. Reading was always the most magical escape for me. I consumed books as though I needed them to breathe.

I continued to read as an adult, discovering Virginia Woolf, The Brontes, Jane Austen, Henry James and other favorites I return to again and again. So I suppose it shouldn’t have surprised me that, after many twists and turns in other career directions, I would eventually write. Not surprising as well is that I should first find my voice in historical fiction for adults—with a foundation in the research I did while I was in graduate school for music history.

But something else happened in the process of writing: I couldn’t help reaching back to my teenage years to recapture the magic I felt in reading. Reading—and writing—equal on the one hand escape from dealing with the difficult things in life, whether they’re to do with growing up or growing old. On the other, they equal a feeling of belonging, of connecting on a deep level, when I experience similar travails and traumas through the eyes of a fictional character. So in my adult fiction I kept finding myself dealing with young female heroines at turning points in their lives, emotional cruxes that to me seem the most interesting of all moments. Before I even knew it, I was sort of writing for young adults.

Here I must give some credit to my wonderful agent. He’s the one who pointed out that tendency in my adult books, and that I should consider consciously writing for that audience. In some ways it was the tiniest shift of focus: I never wrote explicit sex or used foul language in my books anyway, and they’re linear narratives, not experimental or anything esoteric (a good story is what I always aim for). But the transition also pushed me farther than I’d ever been able to go in my writing before. By writing for the teen inside me, I was able to take the next step in my craft. Instead of just a nod to the angst-filled young reader I was, I had to climb back inside my own head and face the demons there. I had to become myself as a teen again if I had any hope of connecting with readers who are currently experiencing the frightening changes and world-expanding growth of adolescence and young adulthood.

So how did I do it? The most obvious way was that I took my distanced, multiple-third-person voice and wrote in the first person, as my 15-year-old main character. Don’t for a second underestimate how difficult that was for someone accustomed to escaping into her imagination. I couldn’t escape from myself. I had to reach down and try to pull up all those painful memories and try to get them onto the page in the form of genuine emotional engagement.

OK, so, maybe I wasn’t all that brave. I’ve yet to write anything about a suburban teenager with an alcoholic and drug-addicted mother and an emotionally distant father. I still place my novels back in time and far away in place.The Musician’s Daughter is set in late 18th-century Vienna, involving Haydn’s orchestra and the imperial household.Anastasia’s Secret concerns the tragic story of the youngest grand duchess of Russia during World War I and the Russian Revolution. My next book takes place in Turkey and the Crimea during the Crimean War. That said, through them I have taken huge steps in what I now see is the right direction for me. In connecting with myself, not pulling any punches or treating young readers as if they are incapable of deep understanding and subtlety, I am finding my true voice as a writer.

That annoying adage, preached to aspiring authors by almost every teacher, “write what you know”, is very, very misleading. Do I know about what I write about? Yes, because I do the research, and because I am a human being, a female creature who has made it through the ups and downs of a rich life. But much more than that, I write what I love, what I want to read, what I wanted to read when I was in my teens and early twenties.

Frankly, I’m delighted to admit that I’ve regressed. I feel as if I am the youngest grandmother in the world, with the heart and soul of a sixteen-year-old. And I’m the luckiest one too. I get to go back and find myself, work out the things that seemed impossible then and resolve them, every time I put words on a blank page. I hope, too, that adults read my teen books and discover a little of that for themselves. I’ve become rather addicted to young-adult literature in general. At its best, the raw emotion, the sincerity and bravery, touch me deeply. It’s often smart, witty, hopeful and helpful. If I were a teen today, I’d have many more choices of reading material that would appeal to me than I had then, when I mostly read adult books.

And this vampire thing? It’s nothing new. I started this post with the vivid recollection I still have of feeling the back of my neck tingle and my skin crawl reading Bram Stoker’s Dracula. I’ll never add to the growing catalogue of vampire novels, but I don’t begrudge the success of those who have. If I can send a teen to another world, a safer place from which to experience danger and thrills, where life’s difficulties are surmounted and love triumphs, then I’ll know I have done something worthwhile.

Susanne, great piece! And we share a couple of significant reading tastes; in a world of Tolkein fans, I was starting to wonder if I was the only T.H. White fan out there.