What does it mean to be loved for yourself? Real life Julia Pastrana was exhibited in freak shows as the "ugliest woman on earth," yet she was intelligent, spoke several languages, and even married. Carol Birch talks about Julia, and her ravishing new novel.Orphans of the Carnival 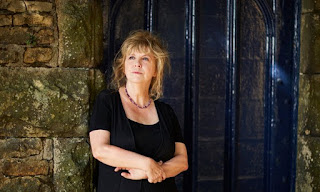 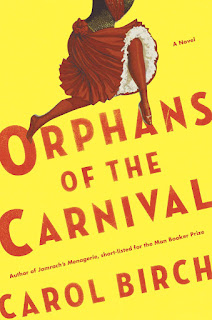 "Roll up, roll up, for a beautifully written novel about the poignant inner life of a 19th century freak show attraction, Julia Pastrana." The Guardian

Orphans of the Carnival is amazing. Truly. Carol Birch is the author of ten novels. Jamrach's Menagerie was shortlisted for the Man Booker Prize, long listed for the Orange Prize and shortlisted for the Galaxy National Book Awards. Birch won the David Higham Prize for Fiction for Life in the Palace and the Geoffrey Faber Memorial Prize for The Fog Line. She was long listed for the Man Booker Prize in 2003 for Turn Again Home. She has written for The Independent, The Times Literary Supplement, The Guardian, The Observer, The New Statesman, Talk of the Town and The Independent on Sunday, among other periodicals. She lives in Lancashire, England, with her husband and sons.Thank you Carol for talking with me, today.

I always imagine that writers are haunted by some inner question or need to write a certain novel. What sparked Orphans of the Carnival for you?

It’s true that something gets into the mind and then builds up until it reaches critical mass and demands to be written. In this case, I was haunted by Julia’s baby. Julia is quite well known, her baby less so. I was very moved by his fate. It’s hard to say too much without giving away so much about the book, but because this book is more than just a simple life story, though Julia is at the heart of it, her story led me to consider such things as the meaning we invest in physical objects, particularly those that reach us from the past, laden with significance.


I love the character of Julia Pastrana. She’s a sideshow attraction who is undeniably exploited, yet she still believes in the dream of love. But the question is can she have it – and that is the wrenching heart of this novel. Who are we really to ourselves and to others. Can you talk about this please?

Julia believes in love. Famously (and this is apocryphal) she said on her deathbed that she knew she had been loved for herself alone. Most people who’ve commented on Julia and her life seem firmly convinced that this was impossible, and Theo Lent is universally regarded as rotten to the core. Neither Theo nor Julia left any first-hand accounts, and hardly anything is known about Lent. While researching him, a more nuanced picture emerged. Significantly, his second wife, also a hairy woman, who survived him, spoke fondly of him. And the fact that in later life he seems to have been tormented by fear, regret and guilt, speaks volumes. Certainly he was a deeply flawed and unstable man. By all accounts Julia believed herself truly loved by him. No-one can know the reality, but I don’t buy the heartless villain/helpless victim scenario, and wouldn’t have been interested in writing about that. Apart from anything else, it demeans Julia.

I found something interesting during research. Theodore Lent is frequently confused with another showman, Lewis B. Lent. Two Lents in the show world of the time seemed a bit of a coincidence, and I wondered if the two were related. The family of Lewis B. Lent, of whom far more is known, owned a famous elephant, Old Bet. Old Bet travelled always by night so that no-one could see her. This maintained her rarity value and ensured that people would keep paying to see her. Her life was completely curtailed, a world of constant travel, darkness and staring crowds. When she died she was stuffed and put on show at Barnum’s American Theatre. This so chimed with Julia’s story. I wonder if our Lent was of that same family, perhaps a less successful branch, one that never made it big. Until he met Julia, his own Old Bet. Pure speculation, of course. I think he loved her in his own way, but it was complicated. It’s one of the things I was trying to work out while I was writing the book, as was the idea of who we are, as you say, ‘to ourselves and to others’. Julia lived at a time when her medical conditions were not well understood, when a top New York doctor could with a all seriousness publicly declare her ‘hybrid’, only part human. How did she see herself? Human, half-human, not human, object, stick of wood, toy – the emotion of love is not picky and lands where it will. Yes, she was loved, I believe. And it was complicated. Those who believe it was impossible do her a mis-service.

I was astonished to read that Julia Pastrana was a real character. What surprised you in your research? What did you embellish or add?

Some of this is covered in the answer to Question 2.

It’s true that Julia lived with the Sanchez family till she was twenty, but I made up the characters of the household. It’s true she went first to New Orleans, but her time there is all made up, as are the characters she travelled with.Rates and Beach existed but I know nothing about them. The story of her mother giving her to the vaqueros rings true, but there are other versions. I made up Cato and Ezra and Berneice. The meeting with Barnum and Van Hare happened, as did the military ball in Baltimore, the insults in the French press, the debacle of ‘The MilkMan Cured’, and her friendship with Friederike. The Russian characters are made up apart from Trettenbacher and Sokolov. Marie is real, also the circumstances of her meeting with Theodore Lent, their marriage and travels and eventual purchase of the wax museum in St. Petersburg. The bridge scene in St Petersburg happened.

The last section is true, but I gave the baby a fictional after-life, a kind of odyssey before he ends up where he can finally rest. I wanted to give him a kind of fictional closure, which he never had in real life.

I also loved Rose, the 20th Century woman who speaks to the dead. What made you decide to have her in the narrative instead of just focusing on Julia?

I needed the modern perspective because Julia’s story is not contained within the boundaries of her own life. Rose presented herself as a worthy foster-mother for lost things. I know the Rose character very well, she’s a mixture of people I’ve known.

The usual things: the scary state of the world, time, mortality, staying sane, working stuff out in my head for the next book.