Adoption, belonging, and just what does and doesn't mean family--Maddie Dawson talks about her racking-up-the-raves new novel The Survivor's Guide to Family Happiness 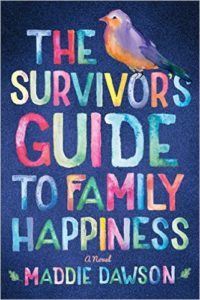 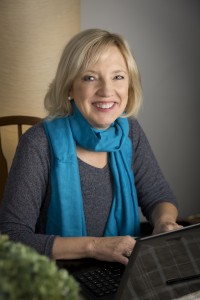 “Maddie Dawson writes a charming story about family in her new novel, The Survivor’s Guide to Family Happiness. Readers are transported back and forth between a mother who gave up her baby for adoption and that daughter’s eventual journey to know the story of her life.” —Associated Press

Maddie Dawson is also Sandi Shelton (all will explained later in the interview!) . As Sandi Shelton, she's the author of What Comes After Crazy, A Piece of Normal, Kissing Games of the World. Maddie Dawson novels include The Opposite of Maybe, The Stuff That Never Happened, and her sublime new novel, The Survivor's Guide to Family Happiness.

I'm thrilled to have Maddie here--she's also a great friend! Thank you, Maddie/Sandi!

I always think that every book begins with a yearning, a desperation to know something. What was haunting you when you started this novel? What question did you want to figure out for yourself, and what answer did the book give you instead?

I love this question, Caroline! I think I’ve always been obsessed with family because I come from one that might be the tiniest bit dysfunctional. Dysfunctional yet hilarious, you know. We’ve pretty much got the DSM-V covered: narcissism, bi-polar disorder, depression, borderline personalities…all the way down to simple garden-variety anxiety. Plus, we’re Southerners, which means that storytelling was installed in our DNA…and God help you if you allow the truth to interfere with a decent punchline!

As a hyper-sensitive, nervous little kid, I sifted through all the stories to try to locate what felt real and true and worth trusting. I am haunted by the notion that we don’t have to be the person our families insist we be—that we are free to walk away, to choose other family members for ourselves. My books seem always to be about making a kind of peace with our first families—a coming of age that takes place long after we’re grown up.

As an adult, I feel lost and estranged from my first family. My parents and siblings are now dead, and because my parents divorced and my mother moved me away from the South when I was 12, I’ve not been raised with the myriad cousins and aunts and uncles I had as a young child. Like Nina in the novel, I long for and fantasize about what it might be like to be part of a huge, great, sprawling mess of a family. Instead, I’ve made my own family—my husband and children and the friends I’ve adopted. And I am happy this way, although I will perhaps always have that vague sense of uprootedness.

What answer did this novel give me? It didn’t do what I’d thought it would do—say that biological family really isn’t all so important after all, and that we are all free to create our own families. Instead, the novel ended up showing me that in some ways most of us yearn for both things, and that we can heal ourselves by looking at and forgiving the limitations of our families (whether adopted or biological) while at the same time creating a posse of supporters, whose love we choose to cherish, and to whom we give our all.

The Survivor's Guide to Family Happiness is so timely--but it digs deeper under the headlines of birth mothers and adoptive ones, to really ask, what makes a family?  What's the answer to you?

I love, love, love the idea of modern families—the way that we bond with each other for so many other reasons than the fact that we’re biologically related. Was it always this way? Perhaps, but now it seems that more than ever, it’s love that makes a family—and we all recognize the many different types of families there are.

I have to ask because both the title and the cover are so perfect. How did you come up with the title? Did you have input on the cover, which is just gorgeous?

Thank you so much! I thought of this title when I was contemplating the main character (Nina’s) fantasy that “family happiness” is a static thing--like wealth perhaps--that she can’t figure out how to get for herself. She thinks if she could only locate her birth mother and show her that she never should have been given up for adoption, that she will at last know how to be happy as part of a larger family. Meanwhile, Nina is falling in love with a much older man, the divorced father of two teenagers, and slowly becoming more entrenched and necessary in his family’s life. She doesn’t realize that perhaps this motley crew of misfits, complete with tattoos and piercings and perhaps a little bit of animal activism gone terribly wrong, is what family is all about in the real world.

As for the cover—I feel the same way! My publisher had designers who created three different covers, but this is the one that spoke to me the most. I love the colors and the beautiful font—and of course the bird! I couldn’t be more thrilled.

What's your writing process like? Do you map things out, try to coax the Muse to talk to you?

I do a funny, perhaps neurotic, combination of mapping and coaxing. When the story first lands in my head (usually being told to me by one of the characters, and usually in the middle of the night) I sit down and start writing everything down that I’m being told. It’s a feverish time, and I write pages and pages before I ever really know what’s going to happen, or even if this is a real story. After I have about 20 pages or so, I stop and do the exercises recommended by John Truby in his Anatomy of Story book. Discovering Truby has saved me so much time, because it allows me  to figure out all the important things about the track of the story before I get too far in. You can solve story problems and keep yourself from wasting years of your life on a story that really has no solid premise. It makes it a lot more fun!

What's obsessing you now and why? (I know the answer!)

Ha! You do know the answer! I think that one of the weirdest times in life is when a book is completely finished, printed up and ready to go out into the world—and suddenly people (strangers, even!) are reading it and making observations about it, and it’s the oddest sensation to think that these characters that belonged only to you now seem to have taken their place in the world. I am always amazed at the connections readers make that I never thought of, and observations they have about the characters that never would have occurred to me. I tell you, you feel very vulnerable sending these defenseless people out to be judged, with all their flaws and their secrets and their imperfections. You sometimes wish you could have done better for them—but the truth is, by the time they’re heading out, you’re involved with a whole new cast of characters who are busily engaging you, and you’re just as obsessed with these new lives and a whole new set of problems. Right now, my new main character finds herself dabbling in magic, and so I’m reading books of spells. I’m almost ready to start creating potions in the bathtub!

I'm fascinated that you write under a pen name. Why did you decide to do this? Do you feel differently as Maddie?

The pen name actually wasn’t my idea. It came about from the Crown Publishers marketing department before my fourth book came out. They had somehow decided with books one, two and three (all written under the name Sandi Kahn Shelton, which is the real me) that these books were to be marketed as “chick lit.” You may remember chick lit: Bridget Jones and all that. Quirky, funny, romantic comedy books about young women obsessed with weight, great shoes, and with falling in love. My books weren’t  quite like that—okay, they weren’t like that at all—my protagonists tended to be older and to perhaps have a bunch of kids and an ex-husband and a difficult mother…but who was I to argue with a marketing department? So when I wrote book #4, The Stuff That Never Happened, and it was about a marriage of 28 years that now seemed to be crashing due to the weight of a long-held secret, the marketing department cried out in alarm: “But this isn’t chick lit! We need to change your name in order to find a whole new audience for you!”

I wasn’t exactly thrilled at first, (hence the name MADDIE), knowing how difficult it was going to be to try to be two people in the world. (Two Facebook accounts, two twitter accounts, two blogs…) But over the past six years, I have to say I’ve realized there’s a kind of freedom in using a different name. I feel more anonymous, freer in a way to write the way I want to write. And as a bonus: my children’s friends don’t necessarily connect Maddie Dawson with my kids’ lives, so I have a lot fewer of those shocked looks when they’ve realized I am a mom who has written a sex scene. (Horrors!)