Suzanne Rindell talks about Three-Martini Lunch, Greenwich Village walkups, fear of flying translating to gorgeous writing about it, and so much more 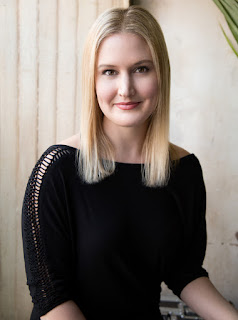 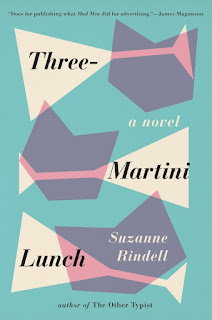 Suzanne Rindell writes the kind of books I want/need to read. Gritty, smart and ambitious. Her first, THE OTHER TYPIST, was translated into 15 languages and optioned for film by Fox Searchlight. And her new novel, THREE-MARTINI LUNCH is--well, let's let Publisher's Weekly rave about it:

"With its vivid historical setting and the narrators' distinct voices, this ambitious novel is both an homage to the beatnik generation and its literature, as well as an evocative story of the price one pays for going after one's dreams."
—Publishers Weekly

I'm honored to have Suzanne here. And let's get that martini next month, okay, Suzanne?


I loved it that you lived above a funeral home—so Six Feet Under—and do you think it helped or hurt your creativity?

Helped! I was so leery of living there, but ultimately, the price was right. I thought I was simply doing what was necessary to live in New York while working as a publishing intern. However, after moving in, I found it was a very safe, quiet place to call home – and moreover, it was a great place to write. I mean, it wasn’t like I was going to throw a party there, hah! I had less of a social life while living there, but I think that was good for productivity.

I love the whole Greenwich Village backdrop of Three-Martini Lunch. What was your research like? What surprised you? Did anything make you have to change a character or the story?

One thing I did for the sake of research is I moved from the funeral home apartment in Harlem to a very tiny studio in the West Village, because I wanted to be able to take walks around the neighborhood as I wrote. Every once in a while a certain detail would come up that would surprise me – for instance, women still weren’t allowed in McSorley’s  in the East Village in 1958. So obviously, my character Eden couldn’t go in there. It worked out better, though – I could picture her husband going there and leaving “the little woman” at home on purpose. Which tells you something about Cliff.

So much of your novel is about the price of dreams—do you think there always is some cost or loss?

I don’t think there has to be; often times hard work or luck is enough. The characters in Three-Martini Lunch are all trapped by circumstances specific to their time period. And at the same time, they intrigued me because I felt they each painted themselves into a corner, which is something we all do (or are capable of doing).

What kind of writer are you? Do you map things out or just feel your way? And do you drink martinis?
I do a bit of both. I start a book with a feeling. At some point I make a map. Then at another point, I throw the map out as I feel my way forward. I’m getting a little old for the post-martini hangover, but I do like wine… wine might be the thing that helps me throw out the map, hah!

What’s obsessing you now and why?
The new book I’m writing is about a barnstorming (flying circus) act in California during the years leading up to Pearl Harbor and America’s internment of the Japanese. So I’ve been watching old grainy newsreels on YouTube of wing-walking and other tricks people did with biplanes. Given that I’m afraid of flying and heights, this is a stomach-turning obsession to have.

“When are your free for martinis?” – Hah! We’re writers, we’re supposed to be constantly sitting around drinking martinis, pretending to be Hemingway, right? ;)
ANSWER: Let's make a date at Pete's Tavern! It was good enough for O'Henry, right?
Posted by Caroline at 10:57 AM