Kim Brooks talks about her ravishingly unsettling novel THE HOUSEGUEST, parenthood and fear, using storyboards, and so much more 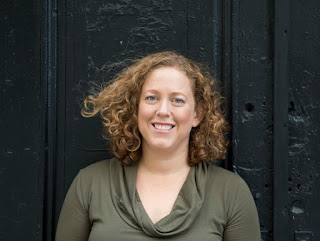 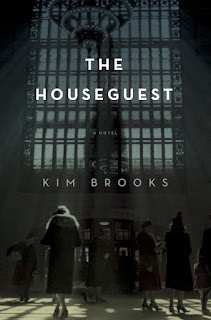 I work with a lot of publicists (which is a lot of fun) and I deeply admire and am devoted to them. What I love the most is when a publicist is so excited about a book that it comes through on every word--that's something I never ignore. The amazing Megan Fishmann at Counterpoint Books sent me this book and it is everything she said it was--and more.

Kim Brooks is the personal essays editor at Salon. Her memoir, Small Animals: A Memoir of Parenthood and Fear, will be published in 2017 by Flatiron Books/ Macmillan. Her stories have appeared in Glimmer Train, One Story, Five Chapters and other journals and her essays have appeared in Salon, New York Magazine, and Buzzfeed.
Thank you so much, Kim!

I love the foreboding cover—you can’t take your eyes off it. Did you have any input? And can you talk about the image as it applies to this glorious novel?

Yes, I did have the chance to offer my input and I feel very lucky in this regard. Early in the process, my editor asked if I had any thoughts about covers, and I told him I was obsessed with trains and rail travel, and that this was one of the motifs that ran through the novel. We spent some time browsing photographs of mid-centry trains stations and found a few that seemed, not just beautiful and haunting, but evocative of the novel’s main time period, mood, and its literal and metaphorical focus on transience and placelessness. Specifically, the cover is a photograph of Grand Central Station, New York City, during approximately the era in which the novel is set. So while the image alludes to both the time and place of the world inside the novel, it is the mood and ambiguity of the image that immediately spoke to me. I loved the way it seems to pose questions rather than providing answers about the book— is the lone, anonymous figure in the foreground the houseguest? What awaits her, and the reader, on the other side of the doorway? The imagine is an invitation to follow her as she emerges from the shadows.

Your novel is so gorgeous, and so sometime unbearably difficult to read because of the times it portrays and its concentration on American Jews reactions to what is happening to Jews during WWII. What was your research like? What stunned you about what you found?

Well, I definitely didn’t begin with research. I began in a much more interior place, writing about this particular family living in upstate New York on the eve of the United States’ involvement in World War II. I was primarily interested in their psychology and relationships and family life. I wrote and published a short story that didn’t go much beyond this in scope. But eventually, of course, as I began expanding this into a longer work, the characters had to step outside of their domestic boundaries, and I realized that if I was going to build a novel around these people, I’d need to learn about the country they lived in, their particular, cultural moment. I began reading a number of books about American Jews in the thirties and early forties, both regular, Jewish American citizens and those heading the Jewish agencies and organizations in the U.S. I read David Wyman’s book, The Abandonment of the Jews, and was shocked and disturbed to learn, not just about how much resistance there was throughout the country toward rescue efforts, but also how much discord and disorganization existed amongst those charged with heading these efforts.

What kind of writer are you? Do you map everything out or follow the muse, and why?

Yes! I map everything out. I use post-it notes and story boards and special software and complicated outlines. And then, in a moment of exquisite frustration I throw all my efforts at mapping out and follow the muse. And then I do it all again, five or six times over the course of many years until, miraculously, I have a something resembling a novel. That’s not a very clear answer, but for this book, I’m afraid it’s the best I can do. I think in many ways I am, or was, more comfortable with shorter forms— stories, essays— which I’m able to complete with minimal preparation or planning. One of the challenges of moving to a novel for me was the organization, technical skill, and three-dimensional mind-mapping it requires. I found all this very, very hard. But I’ve been told and promised that it gets easier with each book, so this is what I’m choosing to believe.

What’s obsessing you now and why?
I’m working on a memoir about parenthood and fear. It explores various themes in an essay I wrote a few years ago called The Day I left My Son in the Car. On a surface level, it’s about an experience I had four years ago when I was arrested for letting my son wait in our car for 5 minutes while I ran into a store, and the experience of other women (it’s usually women) around the country who have been arrested for similar crimes. But the larger narrative is really concerned with how our culture of fear, judgment, and insecurity has changed the way we parent over the past several decades. I’m very interested in fear and anxiety and its impact both on individuals and on society at large. When people ask what my next book is about I always say that it is completely different from The Houseguest. But maybe it’s not so different.

A lot of people have wondered why I chose to set much of the novel in Utica, New York, which is something I myself have wondered. But a few weeks ago, I received an email from a man who had seen my novel advertised in a bookstore in Louisville, Kentucky. He emailed me and asked what my connection to the city was. His wife's grandfather, he told me, had come from the Ukraine around 1918, ran a scrap yard and hardware store, Barney Levitt & Sons, in nearby Rome with his sons Sonny, Billy, and Joe Levitt. Sonny and Billy lived in Utica. This family might have easily been the model for the Auer family in my novel, had I known them.

This message delighted me, though I knew nothing of Barney Levitt & Sons or Kowalski’s scrap yard, enterprises on which the junk yard of my protagonist, Abe Auer, might have easily been based. It delighted me because it suggested that the strange intuition I’d followed in setting parts of my novel in Utica, New York, was based on something, if not factually, then emotionally true.

The emotion or impulse that led me to this unlikely setting arose, like so much of my fiction, from barely-remembered childhood memories. My father and both his parents were born and raised in Utica, a town that could not be more different from the one where I grew up—a suburb of Richmond, Virginia, the heart of the Sun Belt, the sort of city that sucked the economic life from places like Utica. Once or twice each year, I’d visit my grandmother there. We’d visit the zoo, take a tour of the old brewery where kids could get root beer floats, visit the various parks. Sometimes we’d visit the downtown, a stretch on Lafayette Street where daily trains had once arrived at the main rail station, where people had once eaten and shopped at Woolworth’s and The Boston Store, where visitors had lodged in the shabbily elegant Hotel Utica. Now, the old buildings were mostly closed, the sidewalks empty. And yet still it seemed a beautiful, small, quintessentially American place.

The summers I spent visiting my grandmother there remain among my fondest childhood memories, despite, or maybe because of the fact that I was so struck, even as a child, by the haunted, abandoned aura that hung over the town. The rural suburb of my Virginia home had been literally built on a swamp. It sprung from the inspiration of a seventies developer: woodland cleared, reservoir filled, a few thousand single-family homes plopped down as quickly and as economically as possible in a location where there was nowhere to go and nothing to see and nothing to do without a car. It was a place without history, or rather, a place that existed completely outside of the history of the land on which it sat. Utica, by contrast, seemed to exist almost entirely in the past. Like so many Rust Belt cities, it felt not so much like a living, breathing place as a remnant of the community it had once been, a shell of a turn-of-the-century textile boomtown. I suppose this ghostly quality penetrated my subconscious. It lurked and shifted and re-emerged, eventually making Utica seem like the correct setting to begin a novel that is largely about what it means to hold onto or let go of the past, how it feels to abandon and to be abandoned.
Posted by Caroline at 11:36 AM