Sex. Death. Music. Depression. Addiction. Who we are and who we struggle to be. Rob Roberge talks about his extraordinary memoir, LIAR 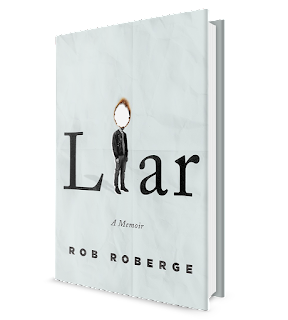 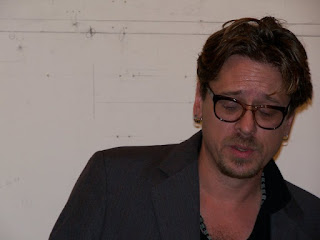 I first met Rob Roberge at a reading at KGB's. Not only is he one of the fiercest, most extraordinary writers I know, he's also a hoot to hang out with. He's the author of The Cost of Living, Working Backwards From The Worst Moment of My Life, More Than They Could Chew, and Drive. He teaches and also plays guitar with the L.A. band, The Urinals. And his new book, a memoir, Liar, is intense, brilliantly written, and deeply moving. Don't want to take my word for it? Read below:

“I’ve never read a book more intimately devoted to articulating how tenuous our hold on identity is. Identity is made, unmade, remade by chasing memory, and memory is a series of emotional intensities we barely survive. We make up stories of ourselves to bear the weight of our actual lives. We live between those stories and events coming at us like catastrophic meteors.  And yet, mercifully and sporadically, love comes. Read Rob Roberge’s memoir,  LIAR.  Because life is what happens between truth and the fictions we make to withstand it.” —Lidia Yuknavitch, author of THE SMALL BACKS OF CHILDREN and THE CHRONOLOGY OF WATER

“Uncompromising and deeply affecting, LIAR is a brilliantly fragmented, darkly humorous account of a lifelong struggle with addiction and mental illness that stands with Fred Exley’s A FAN’S NOTES. Strip-mining his memories for veins of truth, Rob Roberge unearths a fractured, unholy, and undeniable work of brilliance.” —J. Ryan Stradal, New York Times bestselling author of KITCHENS OF THE GREAT MIDWEST

“Rob Roberge’s LIAR is an unforgettable story, but what sets this stunning memoir apart is the unforgettable voice. Roberge interrogates memory with an ardent desire to be good and to do right. A deeply moral and complicated book, it comes from the heart of a man who writes about love, loss, and addiction like no other writer. You’ll fall in love.” —Emily Rapp, author of THE STILL POINT OF THE TURNING WORLD

I always want to know what’s haunting an author that gets him to write a certain book. So why did you feel that now was the time to write a memoir?

I’m not sure I did feel it was time to write a memoir—at least initially. I had some little sketches that I had published on-line, and a few friends told me I should turn them/it into a book. I thought it was kind of a ridiculous idea. Who would want to read about me for 200+ pages? But, slowly, I came around to the idea of writing the memoir as my various medical conditions got worse—my bipolar and, particularly, my post-concussive syndrome, which threatens memory and ups the possibility of early dementia. So, I guess, I wanted to get it down. There became a sense of urgency in some ways. I’ve always been interested in the (sometimes) wide gap between fact and memory. Memory, as Nabokov said, is a revision. And I wanted to explore that…and the lies we tell ourselves and the lies we tell others.

Also, on a personal and craft level, I had already done three novels that were becoming increasingly autobiographical. And I figured it was maybe time to lose the veil of fiction and write a book overtly about myself. It felt like the culmination of a phase of my career. For now, I’m done writing about me. I’ve done it in both forms and it’s time to try something new. To write about people not at all based on me.

Your book is raw, blazingly honest, (which is funny for a book called Liar!) moving, shocking--all the best adjectives. Were you anxious about revealing so much or was it a relief to be so honest? What was it like to relive you past on paper?

Honestly, I don’t think a single scene in it was a relief to write. The whole thing was more or less very scary and difficult. Maybe a few of the funny scenes were fun to write. But maybe the one relief about writing the book as a whole was that I felt like I had gotten a lot out. James Baldwin said, after essentially coming out in the writing of Giovanni’s Room, (even though it was a novel) that there was the relief of people not having secrets on him. That no one could tell on him because he had told them himself. So, there’s that. Though, of course, I still have secrets—it’s a memoir, not a diary.
But I would say it was a mostly frightening book. Not so much to write, but to have released in the world. To know that I’m exposing so much of myself to readers is a very frightening thought. As, I suppose, it should be with a memoir, or why do it in the first place?

Did anything in the writing of this memoir surprise you?

One major thing. The biggest surprise was how different it was/is from writing fiction (at least for me). I thought both were narrative prose forms, and that they would prove to be very similar. But that proved to be extremely incorrect. First of all, there was the thought/fear of exposing myself on very page. No matter how autobiographical a novel is, you can always hide behind the guise of fiction. The other major difference was the ethics of the project. I wasn’t just telling my story, but I was telling other real people’s stories (or at least my version/memory of them). And that was a very difficult thing for me to reconcile. That I was responsible for how people in my life would be represented, along with the accompanying fear that they might be angry or hurt by my portrayals of them. This is an enormous fear I still have. And that was probably the biggest difference in writing a memoir versus a novel.

You’ve been through a tremendous amount of pain, drugs, alcohol, sexual encounters, thoughts of suicide, etc.  And you seem to now be in a place where you are successful, wildly talented, loved and beloved. Do you think that writing about all of this and examining it helped you or were you already pretty sure what road you wanted to be on before you started writing this?

]First, thanks for the incredibly kind words. I don’t know how exactly how to answer this question. While I recognize that I am enormously lucky in life…that I escaped some pretty hard situations…I probably don’t ever feel totally out of the woods. I still have thoughts of suicide. I don’t drink or use anymore. But I could relapse tomorrow. I don’t think I will, but I could. That said, I have incredible friends. I know how lucky I am. But, I still go to some pretty bad places mentally. Not as often as in the past, but it’s still there. The highs and lows of having bipolar can be exhausting, and they get worse with age, from what the doctors tell me. Though writing the book probably did help me put a lot of my past and present into a different perspective. I view my old self as a much more lost and confused and fearful person than I am today. Though I still fight the same problems, I’m probably better equipped to deal with them now. And writing the book reminded me of that.

I’ve been thinking a lot about why your book is so compulsively readable, why I couldn’t wait to get back to reading. I think it’s because even in your depths of self-harm and self-deceit, you are so vulnerable that the reader can’t help but want you to  be okay. How do you feel now about your past self?

That I was a very immature, damaged young person. That I made a ton of mistakes I wish I could take back. And with a lot of regret, probably. One of the things I learned from the work of Richard Yates was that so much of a writer’s material can be about the gap between who we are and who we wish we could be. And I have felt that gap very strongly at times. I try, too, though, to have a measure of forgiveness for who I was (and who I am). I’m not very good at it. I’m tougher on myself than I am on anyone else. I’m not very good at allowing myself to be human, and I get very frustrated when I don’t measure up to who I know I’m capable of being. Though, I tend to feel that more about my past than my present, so I suppose that’s progress.

Probably my fear about how the book will be received. I’m also working on a new novel that’s giving me a lot of trouble, so I’m not writing enough. I’m trying to be more obsessed with it than I probably am at the moment. But promoting a book while trying to write another one is very difficult for me. So, I’m trying to cut myself some slack there. But mostly I’m obsessed with fear with how Liar will be viewed and received. I’ve never had that feeling with a book, so it’s something new and mildly terrifying, to say the least.

I can’t think of any. Thank you so much for the questions you did ask, and thank you for the kind words about the book. It means a lot and I’m extremely grateful.
Posted by Caroline at 3:48 PM