Joyce Maynard talks about UNDER THE INFLUENCE, using giant white boards to write, children, music, alcohol, wanting to be good and so much more 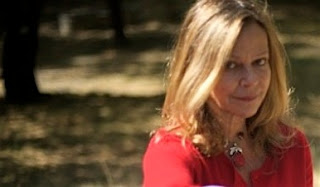 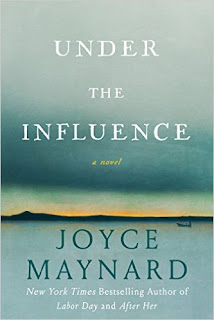 Usually my interviews for this blog are done via email, but Joyce Maynard wanted us to see each other as we talked, for it to be more personal. How could I resist that? So with her in Guatemala and me in Hoboken, we made contact via Skype, had great laughs and talked for an hour.

Joyce is the critically acclaimed author The Usual Rules, Looking Back: A Chronicle of Growing Old in the Sixties, Where Love Goes, Baby love, To Die for (made into a movie with Nicole Kidman), Labor Day (made into a movie with Kate Winslet) and the memoir, At Home in the World.  She also runs fiction and memoir workshops in California and internationally, and founded The Lake Atitlan Writers’ Workshop in Guatemala.  In 2013, she got married, after 25 years as a single person.

Her latest novel Under the Influence will be out February 23, and it is completely wonderful. I’m delighted to host Joyce here. Thank you so much, Joyce!

For me, a novel always begins with something is haunting me, some issue I have to get at. Was it that way for you, and if so, can you talk about what that was, and how it became the origins of your novel?
Every novel I’ve written has come out of my obsessions.  I don’t always know it at the time, but then I look at the pages, and there I am--of course! There are certain things that never go away. The yearning for family. The loneliness of a single mother.  Actually, most of my novels have single mothers in them.

But this time around, I was thinking a lot about the loss of friendship. I’ve experienced that in a very painful way, more painful that the loss of a love affair. Of course, my story was not the story of Helen, but I like to attach the engine of my own strongest emotion to the stories I tell.

Did you feel healed by writing Under the Influence at all?

No one should have to pay $20 for my healing! But I understand my own issues more. I look to understand relationships when I write, but I want to make it clear that I was very careful in writing Under the Influence not to make this the story of any of my own friendships. I deliberately put Ava in a wheelchair because I never had a close friend in a wheelchair.  I also was thinking about drinking. I had to give up wine. I had a pattern of drinking that would be very familiar to a lot of women. You know, it’s the end of the day and you open up that bottle of wine. I’ve never been drunk, never had Helen’s experience with getting a DUI, but I was using wine in a way that alarmed me. I come from an alcoholic family. Four years ago, I was pulled over, handcuffed and taken to the police station to get a Breathalyzer test. I saw my life flash before my eyes as I waited for the. I passed, but it changed me. I began to speak about it, to name the demon and write about what was happening. I know that as long as I see drinking as a way of dulling pain, I’d better not drink.

Kirkus, in a rave review, called attention to your expert plotting and use of suspense.  Do you map things out? What’s your writing process like?

It’s emotional and organic. I do a giant white board and pretend that I’m a painter. I track my characters. I’ve always said that past a point, if you’ve created characters who have emotional authenticity, they will determine their destiny. I didn’t know what was going to happen with Swift and Ava. They did the kind of things that people like that would do. I never know how a book is going to end. I want to find out.

You also tell stories at The Moth. Does that feel different to you than writing a novel?

You can see your audience! It’s so lonely for a writer, alone at her desk compared to performing in front of an audience where you can hear people laugh or cry  You can also feel when it isn’t working, I think my years of oral storytelling made me a better story teller on the page. And it made me a better teacher.  I love to  help writers at all levels tell a story well. I like to create an arc on my white board, and I keep asking them questions, what do the characters want?  Where is the big change? How do they come out of the novel differently than when they started?

Do your novels change as you are writing them?

Absolutely. This one was almost finished and sitting on  my desk about to be sent  to my editor when when my husband  Jim was diagnosed with cancer. I didn’t go back to writing for eight months. My life as a writer was gone –and when my husband got a lot better and I finally did get back to work,  I was a different person. I was changed, so the novel was changed. I had a different feeling about love. It was no longer the super romantic, flashy love affair that keeps you in bed for weeks that I was interested in. I was thinking about a deeper feeling, about what really matters in a relationship, and that’s how I created Eliot, who is quiet and good, and whom Helen rejects at first as boring.

Do you think about your audience while you write?

I don’t think about what are people going to think. I write the book that I want to read. There have been a number of times when I put away a two hundred page manuscript. Not that it wasn’t good. It just wasn’t good enough. You want to grow. You don’t want to stay in the same place. My new novel is a more ambitious one than the novel before it, and I hope that will always be so.

So much of this extraordinary novel is about how you don’t really know what a person is about, what they are choosing to hide or show--and why. The “Have-it-All Havilands seem to sparkle and anyone would be drawn to them, including troubled Helen’s son Ollie, but their friendship soon turns out to be something very different than it appears. Can you talk about this please?

I used to really be really vulnerable about looking at other people’s lives and believing that they had it figured out and what was the matter with me that I didn’t? I thought I was the only person whose father got drunk. Years passed and I found out that a lot of other people I knew had fathers who got drunk. I never want to create the impression that I have it all figured out. I don’t! Helen is somebody who is a fan, an admirer, a worshipper. She feels so honored when Swift uses her name to address her. It’s thrilling to her, and it’s only when she comes to know them better, that she can see how very deep the flaws and failures go.

How did writing this novel change you?
Every book I write is hugely influenced by where I am and what I’m living through as I write it.  Under the Influence was written (or revised, at least, and basically rewritten) during a time when my husband was fighting a serious cancer battle.  And I wrote out of that place.  I’m very conscious of the value of the present, and very aware of death, the certainty for us all. And our culture keeps denying it. Being with my husband Jim while he battled cancer (he’s now cancer-free and gaining weight) made me keenly aware of the preciousness of days.  I think I always aspired to this, but now more than ever I want to do books that have meaning. I want to do good work.

I also want to think that people are going to be good. It’s cost me, but I still want to be that way. Long ago, I had the experience of writing to a man in prison, and gradually his funny, kind, interesting letters grew uglier and uglier. But I wrote Labor Day to show the flip side. What if a so-called bad man was really good?

You’ve had two of your novels made into films, To Die for, with Nicole Kidman, and Labor Day, with Kate Winslet. What does that feel like for you?

Well, it’s a different entity than your book. You have to let go of ownership, similar to what you need to do with your kids. Relinquish control.  There were things in the movies that would not have been my choice, but I’m not making the movie. The funny thing is I want to give the feeling of a movie in a book. When you read a book of mine, I want to create a movie in your head.  Everything but the popcorn.

What’s obsessing you now and why

Children have been an obsession all my life, and parenthood. I think every one of my novels has a child. Each one unique.

Music is an obsession. I always want to know what music my characters listen to. I even did a sound track for Where Love Goes, and produced it.  If I had my choice of what I’d be good at, I’d make music. I’d be Emmylou Harris, with a voice that has so much feeling it bring tears to a person’s eyes. When I write, I pretend that I am making music on the page. My book is like a song, maybe a heartbreak song, a song that makes you feel the beating of your heart in your chest.  Every book is another song of mine.  As in life, there is generally sadness and sometimes great pain in my songs.  But ultimately, I like to think they are hopeful too.  I’m an optimistic person .  And I believe in the power of love.  That’s an obsession.  It’s in every story I tell.

Joyce's 'obsessions' have made the world a better place. I admire anyone who turns their passions into positive deeds in small and larger ways. There are a lot of writers out there, and many good writers, but few whose words are so infused with love and concern.