Kate Christensen talks about How To Cook a Moose, goals for urbanites, foods she would never eat and so much more


The first thing you need to know about Kate Christensen is that everybody--and I mean everybody--adores her. And small wonder. Not only is she an incredible talent, but she's so warm and genuine that you just want good things to happen to her.  She's the author of six novels, including The Epicure’s Lament, the PEN/Faulkner award-winning The Great Man, and The Astral, as well as two food-centric memoirs, Blue Plate Special: an Autobiography of My Appetites, and her latest,  How to Cook a Moose, which is delicious and wonderful, and I want all good things for the book, too. Thank you so much for being here, Kate. 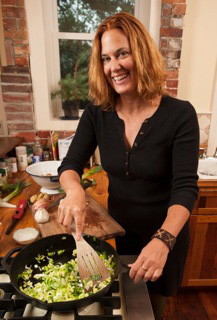 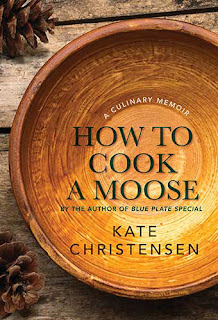 What I loved so much about this book (and about Blue Plate Special) is the sense of place--how environment really can add to your happiness. It felt to me that as soon as you were up in Maine, you knew it was the right place. Do you think it always will be?

I’m leery of using the word “always.” Superstitiously, I fear that as soon as I say it, it ceases to be true. But I will say that I hope Maine always feels like the right place, because I love living here more than anywhere else. For now.

I also deeply admired the way you wove in the stories of the Maine people--how they really are living off the land, and how you appreciate their values--”hard work over glamour, honesty over style”--those sound like essential truths to me.  Do you think there is a way for a city person to incorporate those gifts?

Anyone anywhere can value hard work and honesty over glamour and style if they want to, but maybe ideally, you’d get to have a dollop of glamour along with your hard work and a gloss of style with your honesty. That seems like a worthy goal for an urbanite to shoot for.

It’s all just sheer dumb luck, as far as I can tell. During my last years in New York, I needed to leave both my husband and the city; my love and passion for both had run its course. In the fall of 2008, I met Brendan. We fell in love the following spring; he happens to have a family farmhouse in the White Mountains. In one fell swoop, I left my old, unhappy life behind for both love and this region. We discovered Portland together and bought a house in the fall of 2011. My happiness and my life here feel inseparable.

Is there any food you have no desire to try? (I personally don’t think I could eat those tiny live birds hidden under a napkin, but that’s just me.)

I can think of lots of food I don’t want to try! Most of it is animal in origin, such as those tiny birds under a napkin (I’m totally with you there), live octopus, cheese made out of a rotted sheep’s head, and roasted beetles.  But I would happily eat a delicacy called “moose muffle,” the stewed nose of the moose, described thus in 1916 by Samuel Merrill in The Moose Book:

“…A military chaplain (Rev. Joshua Fraser) writing of a dinner in an Indian camp on the upper Ottawa thus describes a dish of muffle ‘The crowning dish was that grandest of all dishes moose mouffle. This is the immense upper lip and nostrils of the animal, and I have no hesitation in pronouncing it one of the most toothsome and savoury of all the dishes within the range of the gastronomic art. It is white and tender as spring chicken, yet firm and substantial as fresh beef, with a flavor combining the excellencies of both. I eat to repletion, yet was not sensible of any of that uneasy heaviness which generally follows a too hearty meal.’”

“The edible portion of the muffle comprises the fibrous flesh of the cheek and the gelatinous prehensile upper lip. The cartilaginous nasal septum is, of course, not eaten… When I shot my first moose the guide who was something of an epicure and a skillful cook withal described stewed muffle in terms of extravagant praise. His mouth fairly watered at thoughts of royal banquets in the woods when simply a dish of muffle with pilot bread and tea had constituted the menu.”

Your voice--who you are--comes through so strongly on the page, in such an inspiring and honest way. (There’s that word, honest, again.) Was it ever difficult to be so truthful, so there on the page?

Thank you! That’s an enormous compliment. Writing the truth has always felt like the simplest and most rewarding thing in the world, and it’s a quality I love and treasure and respond to when I encounter it in other writers’ work. I know of few greater pleasures than being honest, both about myself and about the world as I see it. And nothing is more interesting to me than hearing, reading, or seeing the truth laid bare. Of course, there’s imaginative truth, and fictive truth, and complex, multifaceted, nuanced interpersonal truth, and they all count.

On a personal level, I’m obsessed with this new novel I’m working on, which has taken over my life these past few months. And in a larger sense, I spend a lot of time, too much really, thinking about a number of all-too-dire 21st century preoccupations—the environment, climate change, human rights, animal welfare, corporate hegemony, financial inequities, and I will stop here, but the list goes on. If my own worrying solved any problems, we’d all be fine by now.

What question did I forget to ask you?

I don’t know! Maybe what’s going on with my dog lately? Dingo is almost 14, and he’s becoming increasingly deaf and blind and slow, but his eyes are bright, his appetite is keen, and his spirits are high. He’s as dignified and sweet-natured and passionately loyal as ever, and I am inspired by his ability to remain optimistic in the face of decline and mortality. I intend to use him as an example when it’s my turn.
Posted by Caroline at 3:19 PM