Howard Axelrod talks about The Point of Vanishing, why coming back to society is so scary, writing, how we see, and so much more 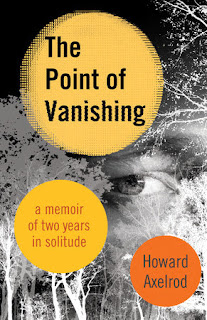 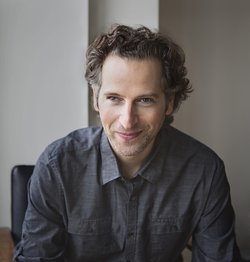 Imagine this. You're a junior at Harvard and playing basketball, and suddenly, someone's finger hooks into your eye, leaving you permanently blinded in your right eye. Desperate to figure out how to live in this new world, you go to the Vermont woods and live without computer or TV and without much human contact for two years. That's that astonishing true story of Howard Axelrod's magnificent memoir, The Point of Vanishing. I'm thrilled to have Howard here!

Can you please talk about what it means to see differently?
Everyone, I think, has had some experience with seeing differently.  After you fall in love, or after a friend has died, or even after you finish a beautiful book--in each case, the air around you feels distinctly different: your eye penetrates in ways it didn't before, and you become attuned to the world, for whatever period of time, in a new way.  Of course, if you went to an ophthalmologist, she'd say nothing had changed, but if you went to a phenomenologist--imagine the eye chart!--or just a good friend, she'd agree that something had. Sometimes these changes in vision, which are really changes in consciousness, happen through accident, sometimes through effort, and sometimes through both.  That combination of accident and effort is what my book is about, but my change in vision started more prosaically, with a physical change in vision.

When I was blinded in my right eye, the difficulty was of making sense of a world that had suddenly become larger, whose rules had changed in an instant.  Without depth perception, nothing looked solid to me; I no longer trusted physical surfaces--they looked permeable--and, soon enough, no longer trusted my own surfaces, the parts of my identity that came from circumstance.  My blindness started me on a search for a deeper kind of orientation, for something other than the visual world that I could trust.  Which, ultimately, is what sent me into solitude in the Vermont woods.

Two truths approach each other. One comes from inside, the other from outside,
and where they meet, we have a chance to catch sight of ourselves.
--Tomas Transtromer, from Preludes

What was the scariest thing about being without human contact? And would you do it again and under what circumstances?
The scariest thing was coming back.  The speed.  The noise.  The filters on my senses hadn't been necessary in the woods--there was nothing I didn't want to see, nothing I didn't want to hear--and the most basic outings back in Boston overwhelmed me.  Even to have a conversation in a quiet restaurant--classical music overhead, Red Sox game on at the bar, conversations at the tables around me--seemed impossible.  I'd learned how to listen for everything--squirrels, chickadees, wind--and forgotten how not to listen. Which was the second part of what was scary--getting a reflection of myself, and seeing just how far away I'd really been, and how far I'd have to come to return.

The book is so beautifully written that I want to know what kind of writer you are. Do you outline? Do you have rituals?
Thank you.  No, no outline, originally.  My assumption going into the memoir was: I know what happened, I can write strong sentences, I'll just follow my memories and associations, and a book will form on its own.  Four years later, I had some strong sentences and a 500-page mess.  So I outlined, worked doggedly for another year, but it turned out to be the wrong outline, too essayistic.  So I did another outline, the narrative with the alternating time-frames clicked into place, and I wrote the majority of the book in eight months, stealing many of those strong sentences from early drafts.  The process, now that I think of it, is akin to your question about the balance between being on your own and looking to others.  The sentence writing was looking within; the structure was looking to an external form, but one that accorded with what I'd found through the sentences.
Rituals, yes.  A walk every morning through the park near my house, then stretching, then sitting down to write.  Then lunch, nap, another walk through the park, then sitting down to write again.

What’s obsessing you now and why?
The death of Oliver Sacks.  I just heard the news of his death this morning.  A few years ago, we had adjoining rooms at a writers' colony.  He read an early draft of my book, was incredibly generous in his response, and we became friends.  He, too, had lost vision in his right eye.  He, too, loved William James.  It's been a hard day.  Sitting across from him, I had the feeling he was listening with all the books he'd ever read, all the patients he'd ever interviewed, all the pain he'd ever suffered.  Imagine the better part of the New York Public Library existing in the form of one man, whose erudition only deepened his interest in what you had to say.  You asked about what it means to see differently.  Whenever I left Oliver's apartment in the West Village, 8th Avenue looked wider and slower, the people more wondrous, our existence here more complicated, more fragile, and more profound.  I will miss him.

What question didn’t I ask that I should havJust realized you already asked it--I just didn't answer.  "Would you do it again and under what circumstances?" My assumption is that I won't need to.  Not that degree of solitude.  Not that level of disconnection from everything beyond the trees. But I do still like being alone.  And I would retreat to a solitary cabin, for a month or two, with a writing project.  Say, for instance, a novel about the benefits and perils of silence.  Which is the novel I'm working on now.