The sublimely talented Julianna Baggott talks about HARRIET WOLF'S SEVENTH BOOK OF WONDERS, awaiting her pub date (August 18!), "having your vision blocked by the veils of your own fiction," and so much more 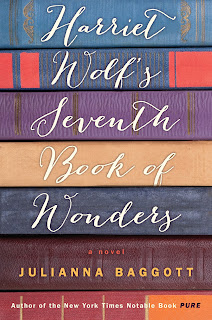 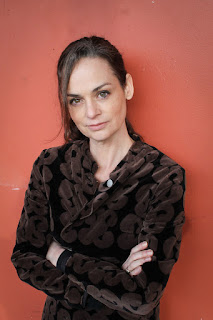 Some writers you love just for their books. Others, you worship because not only do they write brilliant books, but they're big-hearted, big-souled, funny and smart people, and you want to hang out with them over wine and pasta. That's Julianna Baggott for you, and I'm thrilled to have her here talking about her new novel (coming August 18), Harriet Wolf's Seventh Book of Wonders, about a reclusive author, a manuscript that may or may not exist, and the difference between the real world and the fictional one---one more could you want?

So let's move on to the shining credits: Julianna Baggott is the author of over twenty books written under her own name as well as pen names Bridget Asher and N.E. Bode. The first in a trilogy, Pure, was a New York Times Notable Book of the Year and ALA Alex Award-winner. Her latest novel, Harriet Wolf's Seventh Book of Wonders, was published this year by Little, Brown. There are over one hundred foreign editions of her novels. Baggott's work has appeared in The New York Times Book Review, Washington Post, Best American Poetry series, and on NPR's All Things Considered, Talk of the Nation, and Here and Now. She teaches in the College of Motion Picture Arts at Florida State University and holds the Jenks Chair of Contemporary American Letters at the College of the Holy Cross.

Thank you so much, Julianna!


So how does it feel leading up to publication? Even though you're already an acclaimed author, do you still get nervous?
I do. This novel has been with me, in the works, for nineteen years! And so letting loose feels particularly strange. But I'm always anxious when a novel comes out. I don't do it gracefully.
What feels different about this novel than any of your others? And how will that change your next book--if at all?

This novel took so long to write because I lost my footing. I would dig in and then feel like I wasn't a strong enough writer to keep going. What I'm working on now is nothing like HARRIET WOLF'S 7TH BOOK OF WONDERS. It's more in line with my recent work in THE PURE TRILOGY. I'm often push off from one kind of book into the next.

What's the best--and worst--part of book touring for you? Got any funny stories? (Bet you do!)

I once wrote a love letter for a stranger on a plane. A guy was flying cross country to win back the girl of his dreams and I helped him make his case. (It's worked its way into fiction already, something that's not yet out in the world.)

I always find it very strange to go from being a hermit who writes a million hours alone every day and then has to go out and interact constantly. Do you? And if you, how do you manage--and do you you still write while you are on tour?

Funny, HARRIET WOLF'S 7th BOOK OF WONDERS is about a writer who becomes a hermit, a decision that follows an incident while she's on tour! I can't write and tour at the same time -- not a novel. The architecture is too large to haul around in my head. But I can write essays a bit. I absorb people's energy so being public makes me feel pretty wired.

Sometimes, it isn't until after I've completed a novel that I realize what it truly is about, what issue had been haunting me. Is that also true for you? And if so, can you talk about that please?
Yes, agreed. Sometimes I don't know until the Q and A that what I've written is deeply rooted. It's very strange, having your vision blocked by the veils of your own fiction.

I always have to ask what's obsessing you now and why?
(The wording of the question is a little compulsive sounding. Ha.) Currently, I'm at work on a very strange novel that entails a lot of world building. So my mind is trying to experience the texture of that world, which means that my brain doesn't have much downtime.

And I always have to ask, what question do you wish that I had asked?
Oh, I don't know. I guess I could say that HARRIET WOLF'S 7th BOOK OF WONDERS is full of characters who have very serious obsessions and anxieties and fears. It's not just that you mentioned the word hermit earlier -- and Harriet is a famed reclusive novelist with a mystery surrounding her 7th and final book -- but all of your questions about obsessions and anxieties, well, they fit with the book so very well, and, for better or for worse, with how I navigate! (Kindred spirits here.)