Diana Sperrazza talks about MY TOWNIE HEART, growing up blue collar, writing and so much more 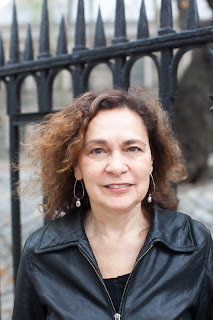 As someone who grew up in a once-blue-collar town, I was immediate drawn to My Townie Heart, especially when I discovered it was set in Boston, where I'm from. But it was the writing, the story, that soon eclipsed that familiarity and plummeted me into a whole different world. Haunting, gritty, masterful--it's a wonderful debut and I'm thrilled to have Diana here. 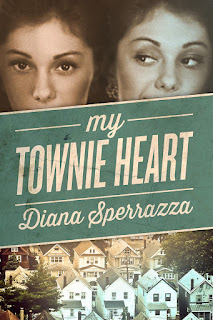 What I loved so much about My Townie Heart is that you got the class differences in Boston exactly right. (I’m a Waltham girl). But I read that you also came from that type of situation, and I’m wondering, as you wrote about it, did it feel healing at all, or did some of the hurt come back? Did you see anything differently or feel that there was anything else you could have done?

Initially I wanted to write a memoir, but honestly didn’t think my life was interesting enough to pull that off. Writing the story as fiction began as sort of an experiment, and I think I was at least partially motivated by believing it would be easier to deal with emotionally. I also thought that I was finally “strong enough” to write about this material. Of course I wasn’t. I had to realize – and this is where the healing began – that I would never be “strong enough” to write the book. I had to go back and feel very vulnerable to write the story and that launched me on a course of deeper spiritual and psychological seeking.  Not that I was any stranger to therapy, but I knew I needed to do more.

So much of this achingly honest book is about how we see ourselves and how we think others see us. Laura thinks she has escaped her small town by going to college, but she doesn’t fit in there, either and flunks out. She can’t let herself love the one guy who loves her because he’s a townie and she wants something better for herself, yet she also can’t get herself to leave her working class town. Why do you think we can’t always know what is the right thing for ourselves?

I can only speak for myself and the times and circumstances that I grew up in, but I think I felt such a need to be someone – that is, a strong someone - that it was difficult for me to allow myself to be loved. When I was younger, the desire to achieve seemed to literally burn a hole in my psyche. It was hard for me to learn how to take care of myself beyond surviving and pushing forward. I think that was due to two circumstances: Being a child of an alcoholic, and being tremendously influenced by the social changes of the 60s and 70s. Both of these things propelled me into a different life than the one I was born to. I won’t even speculate whether it was the right life, but it was a better life for me.

Laura’s sister Jane, the victim of a vicious attack when she is younger, offers a counterpoint to Laura, in that Jane has made a kind of peace with the town and with herself, while Laura is still struggling.  How do you think we can best survive trauma?

I think that in Jane’s character, you see the limits of what being tough can give anyone. Jane’s peace has occurred because she is willing to live with the way the town sees her. She has taken those demons in and they have, in fact, made her stronger. But Jane can’t live any other kind of life. She has mastered a very specific and horrific situation, but she is still bound and limited by it. One of the great things about Jane is that she understands that Laura is different than she is and, in the end, helps her.
What kind of writer are you? Did you outline this book or wait for the pesky muse? Do you have rituals?

Here’s how I wrote this book, and I’m being totally honest. I had the same job as I do now, which involves going into an office most mornings. I knew I had to write before I went to work, if I wanted to get anything worthwhile done. So I’d get up every weekday morning, make coffee and then get back in bed with my laptop. At that time, there were Buffy the Vampire reruns on TV in the morning, and I would watch a few minutes of an episode to sort of rev myself up as I drank coffee. Then I would turn the sound down but leave the TV on, and get to work on the book for an hour or two until I had to go to work. There was something about having the TV on that made me feel indulged enough to face writing. Plus, Buffy was a very heroic and stoic character. It was good to get a little bit of her each morning. That was my ritual. I never really outlined the book. I’m sort of a fast and furious writer, probably because of all the journalism I’ve done.  But I also had a writing partner, Janice Gary (author of Short Leash: A Memoir of Dog Walking and Deliverance). We’d get together once a month to critique each other’s work after trading chapters, and that turned out to be a great ritual, too! Janice is a more lyrical writer than I am, and she made me slow down and develop a better ear for the actual sentences, which was enormously helpful.

The growing disparity between those who have money and those who don’t is something I think about a lot. It’s so much harder now for a younger person if they want an education and their family doesn’t have a lot of money.  Although I struggled because of my background, it was still possible to get grants and loans and go to school if you were motivated. We’ve launched a new Gilded Age in this country and the gate is closed pretty tight for too many young people. It’s simply not fair.

You didn’t ask me what the pluses are, coming from a blue-collar home. So, here’s my list. Certainly, you learn the value of hard work above all else. You don’t expect others, especially your family, to pave the way for you.  You are humble, since you worked plenty of menial jobs yourself and know better than to judge anyone by their occupation. You never, ever, feel entitled to anything you didn’t work for yourself.