How do we grapple with Fear? Ellis Avery has a single all about it.


I love Ellis Avery. And I'm honored to let you all know that she has a new Kindle Single  and she's here to talk about it. The only writer ever to have received the American Library Association Stonewall Award for Fiction twice, Ellis Avery is the author of two novels, a memoir, and a book of poetry. Her novels, The Last Nude (Riverhead 2012) and The Teahouse Fire (Riverhead 2006) have also received Lambda, Ohioana, and Golden Crown awards, and her work has been translated into six languages. She teaches fiction writing at Columbia University and out of her home in the West Village.Thank you so, so much, Ellis. 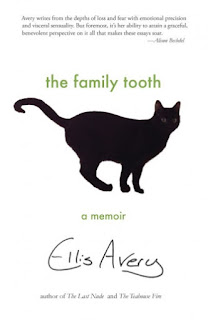 In 2012, I was diagnosed with a rare uterine cancer and given a 26% chance of five-year survival.  As of this summer, according to my doctors, I am a full year out of the woods!

I would be honored if you would consider buying my new essay, ON FEAR, about how I learned to navigate the bleak months after diagnosis, now available from Kindle Singles/

After three years on a drug called Humira, prescribed for a crippling autoimmune condition, Ellis Avery was diagnosed in 2012 with leiomyosarcoma, a rare uterine cancer, and given a 26% chance of five-year survival. When Avery learned that there was no evidence to show that the radiation and chemo she was offered would save her life, she turned down treatment.

But even brave decisions can be terrifying: suddenly, Avery had to learn how to cope with constant fear – that she had made the wrong choice, that her doctors would call with bad news, that her time was limited. ON FEAR, the second essay in a series on Kindle Singles, tells the story of how Avery learned to live one moment at a time, from meditating to singing in the shower to befriending a black cat named Fumiko. While most readers will never face leiomyosarcoma, all of us sometimes face fear: Avery's essay offers hard-won wisdom, tools, and hope.

ON FEAR is the second in a series of essays on grief, illness, and food entitled THE FAMILY TOOTH.  A third essay from THE FAMILY TOOTH is forthcoming from Kindle Singles, and a paper edition of the memoir-zine is coming this fall: you can see the cover, which features a certain black cat named Fumiko!

PS: If you like my essay, I'd be so grateful if you'd consider reviewing it (on Amazon or elsewhere) or mentioning it on your Facebook page!

PPS: If you know anyone who might be interested in reviewing or promoting THE FAMILY TOOTH, please let me know!


Advance praise for THE FAMILY TOOTH--

Ellis Avery writes from the depths of loss and fear with emotional precision and visceral sensuality. But it’s her ability to attain a graceful, benevolent perspective on it all that makes these essays soar.
--Alison Bechdel

Ellis Avery uses her novelist's powers to tell the true story of her life in crisis. She faces her mother's death and her own near-death with an artist's intelligence and imagination--and humor. Reading THE FAMILY TOOTH brings tears of grief and laughter.
--Maxine Hong Kingston

Ellis Avery captures the stillness and the drama of everyday life with elegance and poetry, never shying away from the struggles that make us human.
--Michelle Tea

A sharp, tender memoir about illness, daughterhood and food, THE FAMILY TOOTH dares to explore the most frightening parts of the experience of illness – the threat of death, and the threat of losing one's identity as the body changes radically. A foodie denied the ability to eat almost all the foods that Americans take for granted, a healthy young woman suddenly "disabled" by medical complications and her social environment, Avery must learn to "adjust." She had a difficult relationship with her alcoholic, obese and often critical mother, who Avery comes to learn suffered from one of the same painful conditions that she herself does. Fiercely self-questioning and intelligent, curious even in the face of her own suffering, Avery comes to see the roots of her mother's parenting in long-untreated pain.
--Donna Minkowitz
\
Posted by Caroline at 1:01 PM