Yona Zeldis McDonough talks about her sublime new novel TWO OF A KIND, falling in love, and so much more 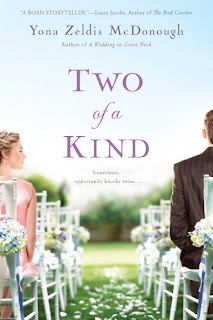 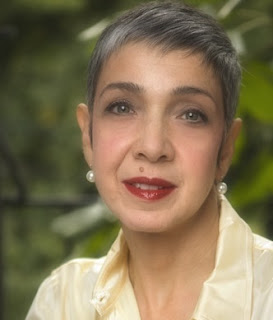 I've been friends with Yona Zeldis McDonough for many of her books (isn't that a great way to think of a friendship?) and I'm thrilled to host her here again for her latest, Two of a Kind, which is already racking up the raves.   Publishers Weekly says, "Readers will delight in this layered tale of friendship and love," and Romantic Times  calls it "honest and engrossing. 4 1/2 stars." About love, loss and what it takes to be brave enough to risk again, Two of a Kind is a one-of-a-kind read. Thank you, Yona, for being here!

I’ve certainly explored love in my previous novels—love between men and women (and on a couple of occasions, between men and men) as well as husbands and wives, forbidden, adulterous love and the soul-shocking, bring-you-to-your-knees kind of love a parent can have for a child.  But I’ve never written a novel that explores and unpacks the process of falling in love—until TWO OF A KIND.
In this novel, I introduced two mismatched characters: Dr. Andy Stern, a brash, occasionally obnoxious but basically decent guy with a high risk gyn/ob practice on Park Avenue, and Christina Connelly, a seemingly frosty Brooklyn-based interior designer who thinks Andy is about as appealing as a basket full of day-old fish. But these two find themselves attracted to each other, and I liked the process of charting the push and pull of that attraction, their attempts to resist it (each thinks the other is fundamentally wrong) and finally their inability to resist one another.
But TWO OF A KIND is not just a love story—it’s a second chance at love story, which is a slightly different animal.  Andy and Christina each come with significant emotional baggage—in his case, he is still mourning the death of a beloved wife from ovarian cancer and dealing with a teen-aged son who acts out his grief in a variety of ways.  Christina comes to the relationship with her own issues: her adored husband Will died in a fire and her daughter Jordan, an aspiring and driven young ballet dancer, despises Andy on sight.  How can these two set aside the emotionally fraught past and find their way to each other? It was my job as a novelist to delineate exactly that.
I worked on a number of fronts: I tried to show Christina’s attempts to fit into Andy’s world, and he into hers.  I documented their growing sexual attraction, and made much of its ultimate consummation.  I used humor, in a scene in which know-it-super-doctor Andy attempts to make dinner for Christina and other his other guests only to find that putting a meal on table is a tad more tricky than he imagined.    And I explored the idea that even in a love story, love doesn’t necessarily conquer all—some other factors need to come into play. I hoped that the accretion of these scenes and the arc of this narrative offer a realistic and vivid picture of what it is like for two individuals to merge into a single, harmonious unit.  So here it is, TWO OF A KIND, my own love song to the mysterious and sometimes baffling process of falling in love...again.
Posted by Caroline at 6:15 PM