Carolyn Turgeon talks about The Fairest of Them All, why the term "fairy tale ending" makes her cringe, and so much more 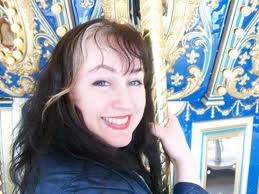 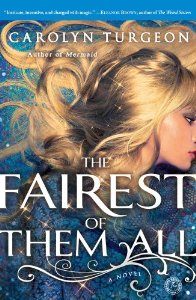 I first met Carolyn Turgeon at the Pulpwood Queen's Book Fest and we bonded over our love of Old Gringo boots and quickly became friends.  The Fairest of Them All turns the fairytale on its end, telling the story of how Rapunzel becomes Snow White's stepmother. It's truly a book about female empowerment and the magic of being alive, and all of it is written in diamond-quality prose. Turgeon is also the author of five spectacular novels: Rain Village; Godmother: The Secret Cinderella Story; Mermaid, which is currently being developed for film by Sony Pictures; The Next Full Moon, her first children's book. And of course, you want to read her mermaid blog at iamamermaid.com/. I asked Carolyn to write something for the blog, and I'm honored to host her here.

So, my fifth novel, The Fairest of Them All, comes out this week; it’s the story, for adults, of how Rapunzel grows up to be Snow White’s stepmother. The idea for the book came when I realized that a lot of the young lovable princesses in fairy tales are pretty much destined to become the aging evil queens we love to hate. In the world of the fairy tale, what options does a princess have when she gets older? I think we like seeing her on her wedding day, imagining that her story continues on “happily ever after” without really thinking about what that might mean for her—especially when her celebrated beauty begins to fade (beauty so intense that princes fall in love with her instantly, even when she’s locked in a tower or lying dead in a glass coffin in the forest). If aging is challenging for regular, everyday women—with rich lives full of loved ones, careers and interests and passions—what must it be like for someone like Rapunzel?

What I like to do is to inhabit, as much as possible, the hearts and minds of these ladies whose stories are in our bones, in these stories that we tell and retell. One thing I love about fairy tales is that there’s so much raw emotion buried within them. You have these complicated stories with all kinds of raging passions and very little room, traditionally, to explore them (the originals are only a few pages long, easily told around a fire, after all!). And when you put yourself in the mind of any of those older ladies, they’re not really so hard to understand. You might not be eating the hearts (or lungs and livers, depending on the version) of your younger rivals, but you might be throwing some hairbrushes at a mirror or two when they start to tell you that you’re losing it, and that that floozy Snow White is a lot more fair.

Fairy tales don’t necessarily leave a lot of room for female friendship and encouragement. Unless you’re an old fairy bestowing gifts on an infant (beauty being chief among them, of course), and even then Angelina Jolie might storm in, furious that she wasn’t invited (Angelina is playing the bad fairy in Sleeping Beauty, in a film out next summer), cursing everyone in sight. Personally, I like to find some common ground amongst women in my books. I like for rivals to come together, for godmothers and evil queens to have complicated relationships—full of love, in and amongst all that jealous rage—with those young princesses who are, after all, versions of themselves.

You might understand, then, why I actually cringe every time I hear someone talking about a “fairy tale ending”—and as a fan of the Bachelor and Bachelorette I hear that phrase a lot. Actually look at the fairy tales we’re talking about, what happens to women as they get older… I don’t really think that those are the kinds of endings we want!
Posted by Caroline at 8:40 AM