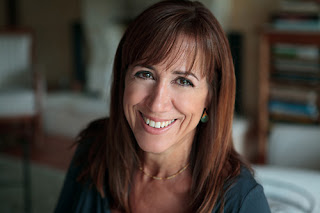 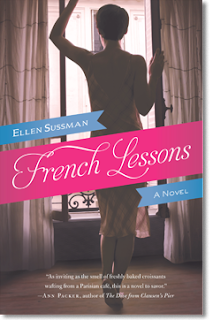 Ellen Sussman's French Lessons, about how a single day in Paris changes the lives of three women, is already racking up some raves, including Ann Packer,  who says, "This is a novel to savor."  I asked Ellen if she'd write something for my blog, and I'm honored that she did.  Thank you, Ellen!
Let it Marinate
Ellen Sussman
I tried to write a novel about a young woman’s relationship with her dying mother about six months after my mother died. The novel failed. I didn’t put my creative energy into the work – I was reporting from the front lines. That’s not the way good fiction gets written – at least for me.
I need distance. I need separation. I need to forget what really happened and let my imagination soar.
I lived in Paris from 1988 until 1993. I loved my time there, even though I was raising babies and struggling with loneliness in my marriage. I was writing while I lived in Paris – but never about Paris. I’ll wait until I get home for that, I told myself.
Years passed and I never found my Paris story. I knew I had to write about Paris – no experience in my life had been richer, lived in such big bold colors. And it was a complicated time – I experienced life as a foreigner, with a new language and culture. I stepped outside of my comfort zone. I learned more about myself in that year than at any other point in my life. So why couldn’t I write about it?
I wasn’t ready. I needed to let those memories build flavor and intensity. I wanted to forget in order to remember those stories in a brand new way.
A few years ago, I was invited to teach at the Paris Writers Conference. My husband joined me for the trip and I bought him a gift – a week with a French tutor, walking the streets of Paris while I taught. After the first day, I figured out that not only was the tutor good at her job, but she was also young and beautiful. What a gift! And soon I had an idea for a novel: a happily married man feels the first stirring of lust for another woman – what does it do to him and to his marriage?
But I have so much more to say about Paris, I thought. And so I created two more Americans and two more French tutors, all of them walking the streets of Paris, talking about love and loss. The novel, FRENCH LESSONS, wrote itself in a mad rush. I had all that material, all those memories and impressions, ready to pour into my story.
Give me a good ten years to let an experience marinate. Over those years, I forget the details and the memories become fuzzy, vague. So when it’s time to sit down and write, I have to create the story on the page. I have to invent character and plot twists – I can’t rely on who was there and what happened, because I just don’t remember! That’s when my fiction comes alive – that’s when I’m making it happen on the page.
Posted by Caroline at 11:46 AM

Great entry! I agree with you. I need distance to write about anything - whether I fictionalize it or write it as a memoir. I'm going to pick up your novel. Sounds like my kinda book.

Thanks, Caren! Hope you enjoy it. Yes, even with memoir, I need some distance before I capture the experience. Good luck with your work!