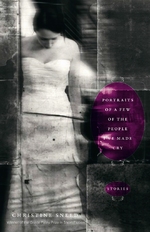 Christine Sneed is incredible.  Not only does she have this great, inventive website, that comes with literary brainteasers, puns, jokes, and more, she's also the author of a brilliant collection of stories: Portraits of a Few of the People I’ve Made Cry (long listed for the Frank O'Connor International Short Story Award and nominated for the Los Angeles Times Book Prize).  I'm thrilled Christine offered to write something for my blog. She's hilariously funny and truly, her collection is genius.
A Casual Introduction:
Several of the ten stories in Portraits examine the perils of love and what it means to live during an era when people will offer themselves, almost unthinkingly, to strangers. Risks and repercussions are never fully weighed.  Mysterious, dangerous benefactors, dead and living artists, movie stars and college professors, plagiarists, and distinguished foreign novelists are among the many different characters. No one is blameless, but villains are difficult to single out--everyone seemingly bears responsibility for his or her desires and for the outcome of difficult choices so often made hopefully and naively.
Getting Personal:
Q. I’ve been asked by a couple of readers why some of my characters seem to have easygoing attitudes about infidelity.  One reader recently said, “The people I know who have been cheated on don’t take it as well as your characters do.  Don’t you think they should be more upset when it happens to them?”
A.  My characters actually are upset about being cheated on, but I try not to write scenes that veer toward melodrama.  One of my goals with these stories is only to point toward the rage, jealousy and despair – all of the feelings that attend romantic disappointment – and to let readers imagine the rest for themselves.
Q.  Why are there so many May-December romances in this book?  Do you have an old-man fetish?  A sugar-daddy obsession?
A.  I don’t think I have an old man fetish, and I’ve never had a sugar daddy, but I am always curious about why two people decide to become a couple, and the different worldviews and experiences that two people with a big age gap frequently have to navigate have always interested me.  One of the stories, “By the Way,” was also a kind of assignment that I gave myself.  I wanted to write a convincing story with a twist on the usual May-December paradigm, that is, the woman is the older member of the couple – seventeen years older than her boyfriend.  She doesn’t believe in her boyfriend’s (truly earnest) feelings for her and is afraid that once he finds out how old she is, he will want to break up with her.
Q. How many people have you made cry?
A.  Not too many, but yes, there have been a few.  The title story is about the granddaughter of a famous artist, and after his death, she finds a series of portraits in his study that he titled “People I’ve Made Cry,” all women, incidentally, because he was a lady’s man, something that kind of gives his rather prudish granddaughter the willies.
Q.  Why should I read these stories?
A.  I tried to be as honest as possible when writing them, especially about how I believe a lot of people, women in particular, feel about themselves when they’re falling in love, or feeling vulnerable to someone, or feeling the desire to be someone else.  There’s quite a bit of longing in these ten stories, and many insecurities on display.  I don’t know how interesting it would be to read a story about someone who doesn’t ever worry or feel afraid or jealous or angry.  I think much of what defines human character is how we handle our insecurities.
Posted by Caroline at 11:13 AM